From Infogalactic: the planetary knowledge core
Jump to: navigation, search
This article is about the theatre in Peterborough. For other uses, see Embassy Theatre. 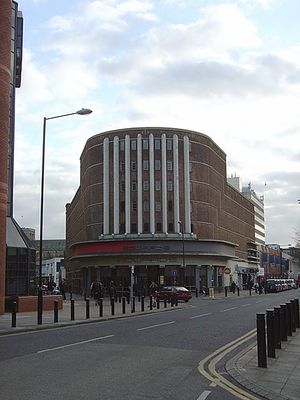 The Embassy Theatre is a historic structure on Broadway in the city of Peterborough in the United Kingdom.

The Embassy Theatre was designed by David Evelyn Nye in the Art Deco style and built by The Demolition & Construction Co. of Croydon using the locally produced Fletton bricks.[1] It opened in 1937, putting on performances by well-known performers such as Laurel and Hardy.[2]

Nye was usually a cinema architect, and this was his only theatre.[3] However, the building was converted into a cinema in 1953, becoming the ABC and later Cannon Cinema. It tripled in size in 1981, before finally closing in 1989.[4] Since 1996, part of the premises have been occupied by the Edwards bar chain.[1]