Emile Davenport Hirsch (born March 13, 1985)[1] is an American film actor, whose works include Into the Wild, Lone Survivor, Milk, Prince Avalanche, The Motel Life, Speed Racer and the A&E networks simulcast miniseries Bonnie & Clyde.[2] He began performing in the late 1990s, and became known as a film actor after roles in Lords of Dogtown, The Emperor's Club, The Girl Next Door, Alpha Dog and the Sean Penn-directed film Into the Wild.

Emile Hirsch was born in Palms, California. His mother, Margaret Esther (née Davenport), is a visual artist and teacher who designed pop-up books, and Hirsch's father, David M. Hirsch, is an entrepreneur, manager and producer.[3][4] He has an older sister, Jenny. He has German Jewish (from his paternal grandfather), English and German ancestry. He was raised in Los Angeles, California, and Santa Fe, New Mexico, where he lived with his mother for several years.

Hirsch's early work includes the Jodie Foster produced film The Dangerous Lives of Altar Boys.[5] He next worked alongside Kevin Kline in the Michael Hoffman picture The Emperor's Club. He was then seen opposite Laura Linney and Gena Rowlands in the award-winning Showtime original movie Wild Iris. 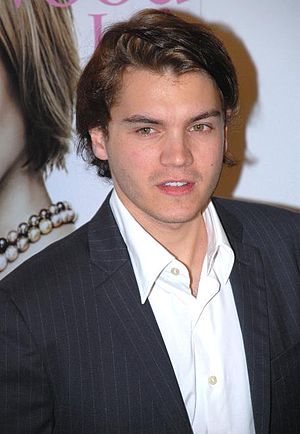 Hirsch next appeared with Jeff Daniels and Sigourney Weaver in Imaginary Heroes, a drama about a dysfunctional family, which was released in February 2005.[6][7]

In 2005, Hirsch also starred with Heath Ledger in Lords of Dogtown, by director Catherine Hardwicke. The film, about a number of skaters of the 1970s and their role in the birth of skateboard culture, was released on June 3, 2005. Hirsch played Jay Adams. He subsequently appeared in Alpha Dog, a dark drama starring Justin Timberlake, Anton Yelchin, Bruce Willis, and Sharon Stone in which Hirsch played a character based on real-life drug dealer Jesse James Hollywood; the film was shot in 2004 and released on January 12, 2007. Hirsch reportedly consulted with Hollywood's real life father before playing the role.

Hirsch next played adventurer Christopher McCandless in Sean Penn's adventure-drama Into the Wild, released on September 21, 2007. He lost 40 pounds for the role which earned him a Screen Actors Guild nomination for best actor.[8] Esquire said, "[Hirsch] creates a vivid, unforgettable character you at once admire and pity."[9]

Hirsch had the title role in Andy & Larry Wachowski's follow-up to The Matrix Trilogy, Speed Racer, which was released on May 9, 2008.[10] Hirsch plays gay rights activist Cleve Jones in Gus Van Sant's 2008 Academy Award-winning Harvey Milk bio-pic Milk that featured Sean Penn in the title role. He also appeared in Ang Lee's Taking Woodstock, based on a screenplay of the Elliot Tiber memoir Taking Woodstock, adapted by James Schamus.

He starred in The Motel Life, based on the novel by Willy Vlautin. The film was lensed in Nevada in 2010, and released in 2013.

In 2012, Hirsch starred with Penélope Cruz in Venuto al mondo, a film by Italian director Sergio Castellitto. In 2013, he was in Prince Avalanche, co-starring Paul Rudd, which premiered at the 2013 Sundance Film Festival where it was acquired by Magnolia Pictures. Director David Gordon Green would go on to win Best Director for the film at the Berlin Film Festival. Additionally, Hirsch starred alongside Academy Award winner Matthew McConaughey in the William Friedkin directed Killer Joe. The controversial, NC-17 film, was written by Pulitzer Prize–winning playwright Tracy Letts.

In 2013, Hirsch co-starred alongside Mark Wahlberg, Taylor Kitsch and Ben Foster in the Peter Berg-directed Universal Pictures film Lone Survivor, (based on the true life memoir of Navy SEAL Marcus Luttrell). The film grossed over $125 million domestically, as well as earning an A+ grade from CinemaScore. In the film, Hirsch plays fallen Navy SEAL Danny Dietz.[12][13]

Emile Hirsch resides in Venice, California. He has appeared on many magazine covers, including Nylon Guys, Teen Vogue, Movieline, Another Man and L’Uomo Vogue (Italy).[14]

Hirsch appeared in Esquire in November 2007, being called one of the "Actors of the Year", along with Denzel Washington, Cate Blanchett, Javier Bardem, Jake Gyllenhaal and Robert Downey, Jr..

Hirsch appeared on the cover of Men’s Journal in January 2009.[15][16] He wrote a "Congo Diary" in December 2008 that was published in the following issue along with a photo spread. He ventured into Africa along with four young activists, and kept a journal of his five-day trip. Reflecting on his trip, Hirsch said, "Now I look back at some of the earlier parts of this travelogue and almost chuckle at my naïveté. Maybe we can all come together to change the world."[17]

On 27 October 2013, Hirsch's first child was born, a boy named Valor. The child's mother is a woman Hirsch met at an Oscar afterparty and "had a fling with," however, they are not in a relationship.[18][19]

On February 12, 2015, Hirsch was charged with aggravated assault after choking Paramount executive Daniele Bernfeld on January 25, 2015 at the Tao Nightclub in Park City.[20][21] On August 17, 2015, he pleaded guilty to misdemeanor assault and was sentenced to spend 15 days in jail, pay a $4,750 fine and perform 50 hours of community service.[22]