From Infogalactic: the planetary knowledge core
Jump to: navigation, search
The native form of this personal name is báró orci Orczy Emma. This article uses the Western name order.

Baroness Emma Magdolna Rozália Mária Jozefa Borbála "Emmuska" Orczy de Orci (/ˈɔːrtsiː/; 23 September 1865 – 12 November 1947) was a Hungarian-born British novelist, playwright, and artist of noble origin. She is most known for her series of novels featuring the Scarlet Pimpernel. Some of her paintings were exhibited at the Royal Academy in London.

Emmuska Orczy was born in Tarnaörs, Heves County, Hungary, and was the daughter of composer Baron Félix Orczy de Orci (1835–1892) and Countess Emma Wass de Szentegyed et Cege (1839–1892).[1] Her grandfather, Baron László Orczy (1787–1880) was a royal councillor, and also knight of the Sicilian order of Saint George,[2] her grandmother was the Baroness Magdolna Müller (1811–1879).[3] Her maternal grandparents were the Count Sámuel Wass de Szentegyed et Cege (1815–1879), member of the Hungarian parliament,[4] and Rozália Eperjessy de Károlyfejérvár (1814–1884).[5] Emma's parents left their estate for Budapest in 1868, fearful of the threat of a peasant revolution. They lived in Budapest, Brussels, and Paris, where Emma studied music unsuccessfully. Finally, in 1880, the family moved to London where they lodged with their countryman, Francis Pichler, at 162 Great Portland Street. Orczy attended West London School of Art and then Heatherley's School of Fine Art.

Although not destined to be a painter, it was at art school that she met a young illustrator named Montague MacLean Barstow, the son of an English clergyman; they married in 1894. It was the start of a joyful and happy marriage "for close on half a century one of perfect happiness and understanding of perfect friendship and communion of thought."[6]

They had very little money and Orczy started to work with her husband as a translator and an illustrator to supplement his low earnings. John Montague Orczy-Barstow, their only child, was born on 25 February 1899. She started writing soon after his birth but her first novel, The Emperor's Candlesticks (1899), was a failure. She did, however, find a small following with a series of detective stories in the Royal Magazine. Her next novel, In Mary's Reign (1901), did better.

In 1903, she and her husband wrote a play based on one of her short stories about an English aristocrat, Sir Percy Blakeney, Bart., who rescued French aristocrats from the French Revolution: The Scarlet Pimpernel. She submitted her novelization of the story under the same title to 12 publishers. While waiting for the decisions of these publishers, Fred Terry and Julia Neilson accepted the play for production in the West End. Initially, it drew small audiences, but the play ran four years in London, broke many stage records, was translated and produced in other countries, and underwent several revivals. This theatrical success generated huge sales for the novel.

Orczy went on to write over a dozen sequels featuring Sir Percy Blakeney, his family, and the other members of the League of the Scarlet Pimpernel, of which the first, I Will Repay (1906), was the most popular. The last Pimpernel book, Mam'zelle Guillotine, was published in 1940. None of her three subsequent plays matched the success of The Scarlet Pimpernel. She also wrote popular mystery fiction and many adventure romances. Her Lady Molly of Scotland Yard was an early example of a female detective as the main character. Other popular detective stories featured The Old Man In the Corner, a sleuth who chiefly used logic to solve crimes.

Orczy's novels were racy, mannered melodramas and she favored historical fiction. Critic Mary Cadogan states, "Orczy's books are highly wrought and intensely atmospheric".[7] In The Nest of the Sparrowhawk (1909), for example, a malicious guardian in Puritan Kent tricks his beautiful, wealthy young ward into marrying him by disguising himself as an exiled French prince. He persuades his widowed sister-in-law to abet him in this plot, in which she unwittingly disgraces one of her long-lost sons and finds the other murdered by the villain. Even though this novel had no link to The Scarlet Pimpernel other than its shared authorship, the publisher advertised it as part of "The Scarlet Pimpernel Series".

Orczy's work was so successful that she was able to buy an estate in Monte Carlo.

She held politically conservative views. Orczy was a firm believer in the superiority of the aristocracy,[8] as well as being a supporter of British imperialism and militarism.[7] During the First World War, Orczy formed the Women of England's Active Service League, an unofficial organisation aimed at the recruitment of female volunteers for active service. Her aim was to enlist 100,000 women who would pledge "to persuade every man I know to offer his service to his country". Some 20,000 women joined her organisation.[9][10] Orczy was also strongly opposed to the Soviet Union.[11]

Asked how to say her name, Orczy told The Literary Digest: "Or-tsey. Emmuska—a diminutive meaning "little Emma"—accent on the first syllable, the s equivalent to our sh; thus, EM-moosh-ka."[12] 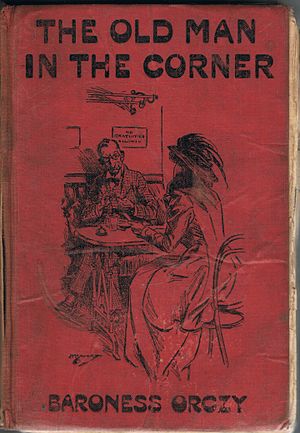 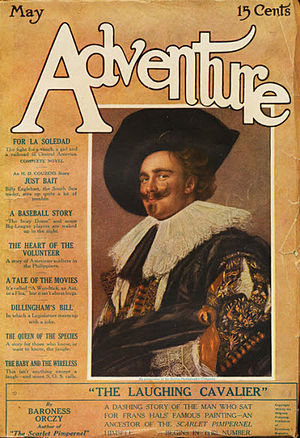 The Laughing Cavalier was serialized in Adventure in 1914