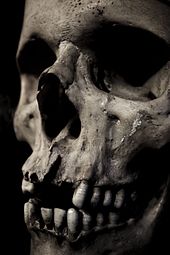 A human skull, widely used as a symbol of death

In philosophy, eternal oblivion (also referred to as non-existence or nothingness)[1][2][page needed] is the permanent cessation of a person's consciousness upon death. This concept is often associated with skepticism and atheism,[3] and is based in part on the lack of evidence for an afterlife.

Consciousness is the basis of subjective experience, agency, self-awareness, and awareness of the surrounding natural world. According to neuroscientist Giulio Tononi, consciousness is "all we are and all we have: lose consciousness and, as far as you are concerned, your own self and the entire world dissolve into nothingness."[4]

Thomas W. Clark, founder of Center for Naturalism wrote a paper titled "Death, Nothingness, and Subjectivity",[7] He critiqued what he saw as a flawed description of eternal oblivion as a "plunge into darkness". When some imagine their deaths (including the non-religious) they project themselves into a future self which experiences an eternal silent darkness. This is wrong, because without consciousness, there is no awareness of space and no basis for time. For Clark, in oblivion, there isn't even an absence of experience as we can only speak of experience when a subjective self exists.

In the Apology of Socrates (written by Plato), after Socrates is sentenced to death, he addresses the court. He ponders on the nature of death, and summarizes that there are basically two opinions about it. The first is that it is a migration of the soul or consciousness from this existence into another, and that the souls of all previously deceased people will also be there. This excites Socrates, because he will be able to conduct his dialectic inquiries with all of the great Greek heroes and thinkers of the past. The other opinion about death is that it is oblivion, the complete cessation of consciousness, not only unable to feel but a complete lack of awareness, like a person in a deep, dreamless sleep. Socrates says that even this oblivion does not frighten him very much, because while he would be unaware, he would correspondingly be free from any pain or suffering. Indeed, Socrates says, not even the great King of Persia could say that he ever rested so soundly and peacefully as he did in a dreamless sleep.

Cicero, writing three centuries later in his treatise On Old Age, similarly discussed the prospects of death, frequently referring to the works of earlier Greek writers. Cicero also concluded that death was either a continuation of consciousness or cessation of it, and that if consciousness continues in some form, there is no reason to fear death; while if it is in fact eternal oblivion, he will be free of all worldly miseries, in which case he should also not be deeply troubled by death.

Similar thoughts about death were expressed by the Roman poet and philosopher Lucretius in his first-century BC didactic poem De rerum natura and by the ancient Greek philosopher Epicurus in his Letter to Menoeceus, in which he writes, "Accustom yourself to believing that death is nothing to us, for good and evil imply the capacity for sensation, and death is the privation of all sentience; therefore, a correct understanding that death is nothing to us makes the mortality of life enjoyable, not by adding to life a limitless time, but by taking away the yearning after immortality. For life has no terrors for him who has thoroughly understood that there are no terrors for him in ceasing to live. Foolish, therefore, is the man who says that he fears death, not because it will pain when it comes, but because it pains in the prospect. Whatever causes no annoyance when it is present causes only a groundless pain in the expectation. Death, therefore, the most awful of evils, is nothing to us, seeing that, when we are, death is not come, and when death is come, we are not. It is nothing, then, either to the living or to the dead, for with the living it is not and the dead exist no longer."[8][9]