In Jainism, two dharmas or rules of conduct are prescribed. One for those who wish to become an ascetic and another for the śrāvaka (householders).

The five fundamental vows are:

Seven supplementary vows of a śrāvaka include three guņa vratas (Merit vows) and four śikşā vratas (Disciplinary vows).[3] The vow of sallekhanâ is observed by the votary at the end of his life. It is prescribed both for the ascetics and householders. According to the Jain text, Puruşārthasiddhyupāya:

The man who incessantly observes all the supplementary vows and sallekhanâ (together, these are called śeelas) for the sake of safeguarding his vows (vratas), gets fervently garlanded (a gesture to indicate her choice for a husband) by the maiden called 'liberation'.

Mahavrata (lit. major vows) are the five fundamental observed by the Jain ascetics. These vows are observed by śrāvakas (householders) partially and are termed as anuvratas (small vows). Ascetics observe these fives vows more strictly and therefore observe complete abstinence.

Abstaining from the commitment of five kinds of sins (injury, falsehood, stealing, unchastity, and attachment) by way of doing these by oneself, causing these to be done, and approval when done by others, through the three kinds of activity (of body, speech, and thought), constitutes the great vows (mahāvrata) of celebrated ascetics. 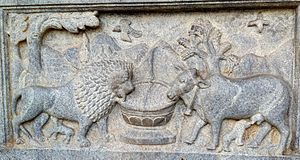 Ahimsa (non-injury) is formalised into Jain doctrine as the first and foremost vow. According to the Jain text, Tattvarthsutra: "The severance of vitalities out of passion is injury."

According to Jain text, Puruşārthasiddhyupāya:[6]

All these subdivisions (injury, falsehood, stealing, unchastity, and attachment) are hiṃsā as indulgence in these sullies the pure nature of the soul. Falsehood etc. have been mentioned separately only to make the disciple understand through illustrations.

Not to lie or speak what is not commendable.[7] The underlying cause of falsehood is passion and therefore, it is said to cause hiṃsā (injury).[8] According to the Jain text, Sarvārthasiddhi: "that which causes pain and suffering to the living is not commendable, whether it refers to actual facts or not."[9]

According to the Jain text, Puruṣārthasiddhyupāya:

Driven by passions, taking anything that has not been given be termed as theft and since theft causes injury, it is hiṃsā

According to Tattvarthasutra, five observances that strengthen this vow are:[11]

The fourth great vow of asceticism is concerned with abrahma (which is indulgence in sexual intercourse). Brahmacharya refers to the self-control in respect of sex-function. It means avoiding all the kinds of natural and unnatural sex-gratification.[12]

An ascetic or householder who has observed all the prescribed vows to shed the karmas, takes the vow of sallekhanā at the end of his life.[3] According to the Jain text, Purushartha Siddhyupaya, "sallekhana enable a householder to carry with him his wealth of piety".[17]

There are five, five transgressions respectively for the vows and the supplementary vows.[18]