Euronews is a multilingual news television channel, headquartered in Lyon, France. Created in 1993, it aims to cover world news from a pan-European perspective.

As a rolling-news channel, headlines from both Europe as well as the world are broadcast in thirty-minute intervals. Brief magazine segments typically fill in the remaining schedule, focusing on market data, financial news, sports news, art and culture, science, weather, European politics, and press reviews of the major European newspapers.[2] These item slots will occasionally be preempted by breaking news or live television coverage. Some segments are displayed without commentary under the banner "No Comment", which has been the channel's signature program since its launch.[3] 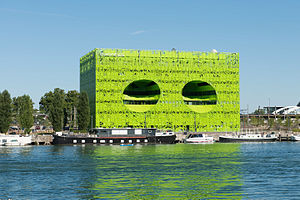 In 1992, following the First Persian Gulf War, during which CNN's position as the preeminent source of 24-hour news programming was cemented, the European Broadcasting Union decided to establish Euronews to present information from a European perspective. The channel's first broadcast was on 1 January 1993 from Lyon. An additional broadcast studio was set up in London in 1996. It was founded by a group of ten European public broadcasters:[4]

In 1997, the British news broadcaster ITN purchased a 49-percent share of Euronews for £5.1 million from Alcatel-Alsthom.[5] ITN supplies the content of the channel along with the remaining shareholders, which are represented by the SOCEMIE (Société Editrice de la Chaîne Européenne Multilingue d'Information EuroNews) consortium. Euronews SA is the operating company that produces the channel and holds the broadcasting licence. It is co-owned by the 10 founders and:

The broadcast switched from solely analogue to mainly digital transmission in 1999. In the same year, the Portuguese audio track was added. The Russian audio track appeared in 2001.

In 2003, ITN sold its stake in Euronews as part of its drive to streamline operations and focus on news-gathering rather than channel management.[6]

On 27 May 2008, Spanish public broadcaster RTVE decided to leave Euronews to promote its international channel TVE Internacional. It also cited legal requirements to maintain low debt levels through careful spending as a factor influencing its decision to leave.[8]

Since 11 January 2011, the channel's video has been broadcast in the 16:9 aspect ratio, which replaced the previous 4:3.

CEO : Michael Peters Born in 1971 in Flensburg, Germany, of French and German nationality, Michael Peters graduated from EM Lyon business school with a master's degree in Financial Engineering (1995) and from IAE Lyon III (1992). He began his career at the international auditing firm of Arthur Andersen, in Lyon, France (1995–1998). Michael Peters joined Euronews in 1998 as Finance Manager and then became CFO. He was appointed Deputy Managing Director of Euronews in December 2003.

Members of the Executive Board

Chairman of the Supervisory Board: Paolo Garimberti

A native Italian and educated in Law, Paolo Garimberti has spent his entire career in journalism. He began as a correspondent in Moscow for the daily newspaper La Stampa, then as Office Manager in Rome. In 1986, he moved to La Repubblica as an editorialist, specialising in foreign politics. He also appeared as an expert commentator on RAI’s TG3 (television news programme). He was then appointed Manager of RAI’s TG2, before going back to La Repubblica as Vice Managing Director, until 2004. During that time, he founded and managed the rolling news website, CNN Italia. He then went on to Espresso Group where he held the positions of Director of International Relations and Development, as well as editorialist. 2009-2012: Paolo Garimberti returned to RAI as its Chairman. In May 2012, he became Chairman of the new museum of the Juventus team at the stadium in Turin. Paolo Garimberti was appointed Chairman of the Supervisory Board of Euronews on 16 December 2011.

Members of the Supervisory Board (natural persons)

Members of the Supervisory Board (legal entities)

In February 2015 the channel's executive board has approved the bid by an Egyptian telecom businessman, Naguib Sawiris, to acquire a 53% controlling stake in the media outlet. The deal raised a number of questions over Euronews' future editorial posture and its independence.[10][11][12]

Euronews has received criticism for perceived bias towards the European Commission which provides a significant part of the channel's funding.[13][14][15]

The channel employs an unusual presentation style: initially, rather than using in-vision presenters, it showed only video footage with recorded voice-overs. This aims to prevent bias. In 2011, however, extended news items featured in-vision reporters, including occasional pieces to camera.

The channel is available in 350 million households in 155 countries worldwide. It reaches more than 170 million European households by cable, satellite and terrestrial. It also began to secure availability on multimedia platforms such as IPTV and digital media.[16]

Euronews launched an application for mobile devices (Android, iPhone, and iPad) which is called "Euronews Live". The application is free of charge and is available on Android Market and App Store.[17]

The channel's programmes are also available by podcast, and it has also maintained a YouTube channel since October 2007.[20]

In 2013, the new commercial channel Planet TV started broadcasting Euronews dubbed in Slovenian after Antenna TV SL purchased a major stake in the company. Euronews airs after closedown (or sign-off) of Planet TV, but both call sign logos are displayed.

Captions are in English, though the names of some countries are not translated (Deutschland, not Germany).