Eutin (German pronunciation: [ɔʏˈtiːn]) is the district capital of Eastern Holstein (German: Ostholstein) located in the northern German state of Schleswig-Holstein. As of 2005, it had some 17,000 inhabitants.

The name Eutin (originally Utin) is of Slavic origin. Its meaning is not quite clear; it is probably derived from the personal name "Uta". The Slavic Obotrites tribe settled eastern Holstein in the 7th/8th centuries A.D. and built a castle on Pheasant Island in the lake now called the Großer Eutiner See. 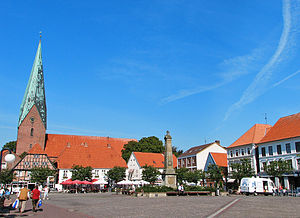 The originally Slavonic settlement of Utin was populated in the twelfth century by Dutch settlers. In 1156 Eutin became a market town. Town rights were granted in the year 1257. It later became the seat of the Prince-Bishopric of Lübeck, as Lübeck itself was an imperial free city. When the bishopric was secularized in 1803, Eutin became part of the Duchy of Oldenburg. As a result of the Greater Hamburg Act of 1937, Eutin passed from the Free State of Oldenburg to the Prussian Province of Schleswig-Holstein. After World War II, it became part of the modern Bundesland of Schleswig-Holstein.

Eutin is the birthplace of composer Carl Maria von Weber. To honor him, an open-air theater (Freilichtbühne) was built in the park of Eutin Castle in 1951, and operas are performed there in July and August during the Eutin Festival (Eutiner Festspiele). The capacity of this open-air stage is about 2000 people. The festival includes music students in Eutin as well as students from the University of Kansas in Lawrence, Kansas, US, which is twinned with Eutin.

Eutin hosts an annual Blues Festival at the beginning of each summer. Local musicians, as well as up and coming blues artists from around the world, come to play in this three-day outdoor blues festival, which takes place in the "Marktplatz" or market place in the center of town.

Schleswig-Holstein, particularly Eutin, is known for its numerous rapeseed fields, which are used for alternative energy. Wind turbines are also heavily used in the region.

Originally constructed as a fully functioning windmill in 1850 by Carl Friedrich Trahn, Die alte Mühle (the old mill) now serves as a bar and restaurant.

Eutin is twinned with: