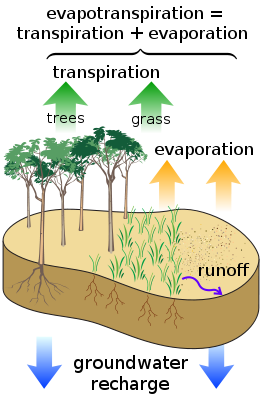 Water cycle of the Earth's surface, showing the individual components of transpiration and evaporation that make up evapotranspiration. Other closely related processes shown are runoff and groundwater recharge.

Evapotranspiration and the water cycle

Evapotranspiration is a significant water loss from drainage basins. Types of vegetation and land use significantly affect evapotranspiration, and therefore the amount of water leaving a drainage basin. Because water transpired through leaves comes from the roots, plants with deep reaching roots can more constantly transpire water. Herbaceous plants generally transpire less than woody plants because they usually have less extensive foliage. Conifer forests tend to have higher rates of evapotranspiration than deciduous forests, particularly in the dormant and early spring seasons. This is primarily due to the enhanced amount of precipitation intercepted and evaporated by conifer foliage during these periods.[3] Factors that affect evapotranspiration include the plant's growth stage or level of maturity, percentage of soil cover, solar radiation, humidity, temperature, and wind. Isotope measurements indicate transpiration is the larger component of evapotranspiration.[4]

In areas that are not irrigated, actual evapotranspiration is usually no greater than precipitation, with some buffer in time depending on the soil's ability to hold water. It will usually be less because some water will be lost due to percolation or surface runoff. An exception is areas with high water tables, where capillary action can cause water from the groundwater to rise through the soil matrix to the surface. If potential evapotranspiration is greater than actual precipitation, then soil will dry out, unless irrigation is used.

Evapotranspiration can never be greater than PET, but can be lower if there is not enough water to be evaporated or plants are unable to transpire readily.

Evapotranspiration can be measured or estimated using several methods.

Evapotranspiration may be estimated by creating an equation of the water balance of a drainage basin. The equation balances the change in water stored within the basin (S) with inputs and outgoes:

The most general and widely used equation for calculating reference ET is the Penman equation. The Penman-Monteith variation is recommended by the Food and Agriculture Organization[5] and the American Society of Civil Engineers.[2] The simpler Blaney-Criddle equation was popular in the Western United States for many years but it is not as accurate in regions with higher humidities. Other solutions used includes Makkink, which is simple but must be calibrated to a specific location, and Hargreaves. To convert the reference evapotranspiration to actual crop evapotranspiration, a crop coefficient and a stress coefficient must be used. Crop coefficients referred to in many hydrological models are themselves during periods for which the model is used. This is because crops are seasonal, perennial plants mature over multiple seasons, and stress responses can significantly depend upon many aspects of plant condition.

A third methodology to estimate the actual evapotranspiration is the use of the energy balance.

where λE is the energy needed to change the phase of water from liquid to gas, Rn is the net radiation, G is the soil heat flux and H is the sensible heat flux. Using instruments like a scintillometer, soil heat flux plates or radiation meters, the components of the energy balance can be calculated and the energy available for actual evapotranspiration can be solved.

The SEBAL and METRIC algorithms solve the energy balance at the earth's surface using satellite imagery. This allows for both actual and potential evapotranspiration to be calculated on a pixel-by-pixel basis. Evapotranspiration is a key indicator for water management and irrigation performance. SEBAL and METRIC can map these key indicators in time and space, for days, weeks or years.[6]

In recent decades, estimating ET has been improved by advances in remote sensing, particularly in agricultural studies. However, quantifying ET from mixed vegetation environs, particularly urban parklands, is still challenging because of the heterogeneity of plant species, canopy covers and microclimates and because the methodology is costly. Different remote sensing-based approaches for estimating ET have various advantages and disadvantages.[7] [1]

Methods for measuring ET can be adapted to an urban setting to estimate the water requirements of urban landscape vegetation.[8]

Potential evapotranspiration (PET) is the amount of water that would be evaporated and transpired if there were sufficient water available. This demand incorporates the energy available for evaporation and the ability of the lower atmosphere to transport evaporated moisture away from the land surface. PET is higher in the summer, on less cloudy days, and closer to the equator, because of the higher levels of solar radiation that provides the energy for evaporation. PET is also higher on windy days because the evaporated moisture can be quickly moved from the ground or plant surface, allowing more evaporation to fill its place.

PET is expressed in terms of a depth of water, and can be graphed during the year (see figure).

Average annual PET is often compared to average annual precipitation, P. The ratio of the two, P/PET, is the aridity index.