From Infogalactic: the planetary knowledge core
Jump to: navigation, search
For other uses, see Exocet (disambiguation).

The Exocet (French for "flying fish"[1]) is a French-built anti-ship missile whose various versions can be launched from surface vessels, submarines, helicopters and fixed-wing aircraft.

The missile's name was given by M. Guillot, then the technical director at Nord Aviation.[1] It is the French word for flying fish from the Latin name exocoetus, a transliteration of the Greek name for flying fish ἐξώκοιτος (exōkoitos), which literally means "lying down outside (ἒξω, κεῖμαι), sleeping outside", because it sometimes stranded itself in boats.[2]

The Exocet is built by MBDA, a European missile company. Development began in 1967 by Nord as a ship-launched weapon named the MM 38. A few years later Aerospatiale and Nord merged. The basic body design was based on the Nord AS30 air to ground tactical missile. The air-launched Exocet was developed in 1974 and entered service with the French Navy five years later.[3]

The relatively compact missile is designed for attacking small- to medium-size warships (e.g., frigates, corvettes and destroyers), although multiple hits are effective against larger vessels, such as aircraft carriers.[4][5] It is guided inertially in mid-flight and turns on active radar late in its flight to find and hit its target. As a counter-measure against the air defence around the target, it maintains a very low altitude during ingress, staying 1–2 m above the sea surface. Due to the effect of the radar horizon, this means that the target may not detect an incoming attack until the missile is only 6,000 m from impact. This leaves little time for reaction and stimulated the design of close-in weapon systems (CIWS).

The Exocet has been manufactured in a number of versions, including:

In February 2004, the Délégation Générale pour l'Armement (DGA) notified MBDA of a contract for the design and production of a new missile, the MM40 Block 3. It has an improved range—in excess of 180 kilometres (97 nautical miles)—through the use of a turbojet engine, and includes four air intakes to provide a continuous airflow to the power plant during high-G manoeuvers.

The Block 3 missile accepts GPS guidance system waypoint commands, which allow it to attack naval targets from different angles and to strike land targets, giving it a marginal role as a land-attack missile. The Block 3 Exocet is lighter than the previous MM40 Block 2 Exocet.[8][9]

Forty-five Block 3 Exocets were ordered by the French Navy in December 2008 for its ships which were carrying Block 2 missiles, namely Horizon-class and Aquitaine-class frigates. These are not to be new productions but the conversion of older Block 2 missiles to the Block 3 standard. A MM40 Block 3 last qualification firing took place on the Île du Levant test range on 25 April 2007 and series manufacturing began in October 2008. The first firing of the Block 3 from a warship took place on 18 March 2010, from the French Navy air defense frigate Chevalier Paul. In 2012, a new motor designed and manufactured in Brazil by the Avibras company, in collaboration with MBDA, was tested on a MM40 missile of the Brazilian Navy. 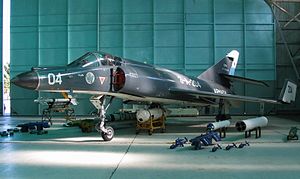 Beside the French, the Block 3 has been ordered by several other navies including that of Greece, the UAE, Peru,[10] Qatar, Oman, Indonesia and Morocco.[11]

The chief competitors to the Exocet are the US-made Harpoon, the Swedish RBS-15 and the Chinese Yingji series.

In 1982, during the Falklands War, the Exocet became noted worldwide when Argentine Navy Dassault-Breguet Super Étendard warplanes carrying the AM39 Air Launched version of the Exocet caused irreparable damage which sank the Royal Navy destroyer HMS Sheffield on 4 May 1982. Two Exocets then struck the 15,000 ton merchant ship Atlantic Conveyor on 25 May. Two MM38 ship-to-ship Exocet missiles were removed from the old destroyer ARA Seguí, a retired US Navy Allen M. Sumner-class vessel and transferred to an improvised launcher for land use,[12] a technically challenging task which also required reprogramming.[13] One of these was fired at, and caused damage to, the destroyer HMS Glamorgan on 12 June.

The Exocet that struck the Sheffield impacted on the starboard side at deck level 2, travelling through the junior ratings scullery and breaching the Forward Auxiliary Machinery Room/Forward Engine Room bulkhead 2.4 metres (7 ft 10 in) above the waterline, creating a hole in the hull roughly 1.2 by 3 metres (3.9 by 9.8 ft). It appears that the warhead did not explode.[14] Accounts suggest that the initial impact of the missile disabled the ship's electrical distribution systems and breached the pressurised sea water fire main, severely hampering any firefighting response and eventually dooming the ship to be consumed by the fire. The loss of Sheffield was a deep shock to the British public and government.

Some of the crew of Sheffield were of the opinion that the missile exploded, others held the view that it had not. The official Royal Navy Board of Inquiry Report, however, stated that evidence indicates that the warhead did not detonate. During the four and a half days that the ship remained afloat, five salvage inspections were made and a number of photographs were taken. Members of the crew were interviewed, and testimony was given by Exocet specialists (the Royal Navy had 15 surface combat ships armed with Exocets in the Falklands War). There was no evidence of an explosion, although burning propellant from the rocket motor had caused a number of fires, which could not be checked as a fire main had been put out of action.

The Atlantic Conveyor was a container ship that had been hastily converted to an aircraft transport and was carrying helicopters and supplies. The missiles had been fired at a frigate but had been confused by the frigate's defences and instead targeted the Atlantic Conveyor nearby. The Exocets—it is not certain whether the warheads exploded or not—caused a fire in the fuel and ammunition aboard which burnt the ship out. Atlantic Conveyor sank while under tow three days later.

The Exocet that struck Glamorgan detonated, (a number of crew members witnessed this, as did the Argentines who fired it,[13] the whole event being recorded by a film crew), on the port side of the hangar deck, punching a hole in the deck and galley below, causing fires. The missile body travelled into the hangar and caused a fully fuelled and armed Wessex helicopter to explode. Prompt action by the officers and men at the helm saved the ship. With less than a minute's warning the incoming missile had been tracked on radar in the operations room and bridge; as the ship was travelling at speed, a turn was ordered to present her stern to the missile.[15] The ship was heeled far over to starboard when the missile struck. It hit the coaming and was deflected upwards. The dent caused by the impact was clearly visible when Glamorgan was refitted in late 1982.

In the years after the Falklands War, it was revealed that the British government and the Secret Intelligence Service had been extremely concerned at the time by the perceived inadequacy of the Royal Navy's anti-missile defences against the Exocet and its potential to tip the naval war decisively in favour of the Argentine forces. A scenario was envisioned in which one or both of the force's two aircraft carriers (Invincible and Hermes) were destroyed or incapacitated by Exocet attacks, which would make recapturing the Falklands much more difficult.

Actions were taken to contain the Exocet threat. A major intelligence operation was also initiated to prevent the Argentine Navy from acquiring more of the weapons on the international market.[16] The operation included British intelligence agents claiming to be arms dealers able to supply large numbers of Exocets to Argentina, who diverted Argentina from pursuing sources which could genuinely supply a few missiles. France denied deliveries of Exocet AM39s purchased by Peru to avoid the possibility of Peru giving them to Argentina, because they knew that payment would be made with a credit card from the Central Bank of Peru. British intelligence had detected the guarantee was a deposit of two hundred million dollars from the Andean Lima Bank, an owned subsidiary of the Banco Ambrosiano.[17][18]

In about 1983, the Lokata Company (a maker of boat navigation equipment), independently duplicated part of the Exocet's navigation system; it caused official complications.[19]

During the Iran–Iraq War, on 17 May 1987, an Iraqi jet aircraft fired Exocet missiles at the American frigate USS Stark. Thirty-seven United States Navy personnel were killed and twenty-one others were wounded.

Germany
German Navy – To be replaced with the RBS 15.

Belgium
Belgian Navy operated Exocet on its Wielingen class frigates. These warships were all sold in 2008 to Bulgaria

Iraq
Iraqi Air Force – AM39 on Mirage F1, Super Étendard and Super Frelon during the Iran–Iraq War, all retired