From Infogalactic: the planetary knowledge core
Jump to: navigation, search
For other places of the same name, see Exton (disambiguation).

Exton is a census-designated place (CDP) in West Whiteland Township, Chester County, Pennsylvania, United States. Its population was 4,842 at the 2010 census. The Exton Square Mall and Main Street at Exton are both located within Exton along with several other shopping centers, making Exton the major shopping district in Chester County. 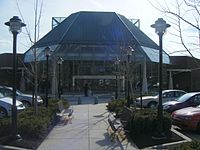 Exton lies at the intersection of U.S. Route 30 (formerly the Lancaster Road, and later the Lincoln Highway) and Pennsylvania Route 100 (Pottstown Pike). Beginning in the late 18th century, the Lancaster Road became a major transportation route between Philadelphia and the west, while what is now Route 100 was a regional north-south route to Pottstown. A theory exists that Exton was named as the "X" on the map, denoting this intersection, though more likely the village was named after one of the several Extons in the United Kingdom.

In the late 1940s, Exton became home to the Newcomen Society of the United States. The campus of the learned society was built overlooking farmland on Newcomen Road, and featured offices, a printing shop, library and museum, guest houses, a chapel and a belltower with a carillon. The Newcomen Society (since dissolved) sold the property in the late 1990s, but its campus remains an Exton landmark serving as the headquarters of another business.

According to the United States Census Bureau, the CDP has a total area of 3.2 square miles (8.3 km2), all of it land. 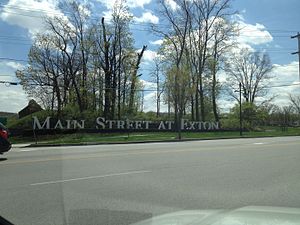 There were 2,053 households, out of which 20.9% had children under the age of 18 living with them, 45.4% were married couples living together, 5.8% had a female householder with no husband present, and 46.6% were non-families. 37.5% of all households were made up of individuals, and 7.9% had someone living alone who was 65 years of age or older. The average household size was 2.05 and the average family size was 2.75. 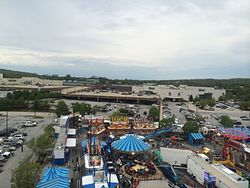 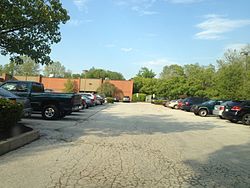