Faisal II (Arabic: الملك فيصل الثاني Al-Malik Fayṣal Ath-thānī) (2 May 1935 – 14 July 1958) was the last King of Iraq. He reigned from 4 April 1939 until July 1958, when he was murdered during the 14 July Revolution together with numerous members of his family. This regicide marked the end of the thirty-seven-year-old Hashemite monarchy in Iraq, which then became a republic. 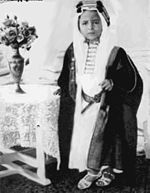 King Faisal II at the age of 5

Faisal was the only son of Iraq's second king, Ghazi, and his wife Queen Aliya, second daughter of 'Ali bin Hussein, King of the Hijaz and Grand Sharif of Mecca. Faisal's father was killed in a mysterious car crash when he was three years old; his uncle 'Abd al-Ilah served as regent until Faisal came of age in 1953.

King Faisal was the model used by Belgian comic writer Hergé for his character Prince Abdullah of Khemed in The Adventures of Tintin.[2] He suffered from asthma.[3] 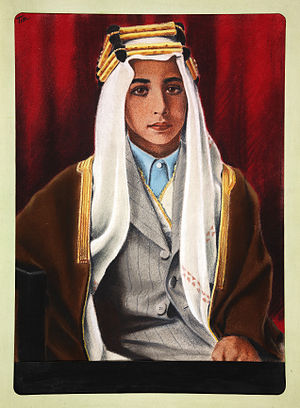 Faisal's childhood coincided with World War II, in which Iraq was formally allied with the British Empire and the Allies. In April 1941, his uncle 'Abd al-Ilah was briefly deposed as Regent by a military coup d'état which aimed to align Iraq with the Axis powers. The 1941 coup in Iraq soon led to the Anglo-Iraqi War. German aid that was promised however never materialised, and 'Abd al-Ilah was restored to power by a combined Allied force composed of the Jordanian Arab Legion, the Royal Air Force and other British units. Iraq resumed its British alliance, and at the end of the war joined the United Nations.

During his early years, Faisal was tutored at the royal palace with several other Iraqi boys. During World War II, he lived for a time with his mother at Grove Lodge at Winkfield Row in Berkshire in England. As a teenager, Faisal attended Harrow School with his second cousin Hussein, later to become King Hussein of Jordan. The two boys were close friends, and reportedly planned early on to merge their two realms, to counter what they considered to be the threat of militant pan-Arab nationalism.

In 1952, Faisal visited the United States, where he met President Harry Truman, Dean Acheson, the actor James Mason, and Jackie Robinson, among others.

Hastening Faisal's demise was the decision taken by his regent (later confirmed by him) to allow the United Kingdom to retain a continued role in Iraqi affairs, through the Anglo-Iraqi Treaty of 1948, and later the Baghdad Pact, signed in 1955. Massive protests greeted news of each of these alliances, resulting in the deaths of hundreds of demonstrators and an increasing deterioration of loyalty to the Iraqi crown. 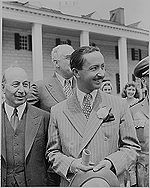 Prince Abdullah (holding hat) at Mount Vernon USA. He was the regent for his nephew Faisal during his infancy. They were both killed during the 1958 coup.

Faisal attained his majority on 2 May 1953, commencing his active rule with little experience and during a changing Iraqi political and social climate, exacerbated by the rapid development of pan-Arab nationalism.

Faisal initially relied for political advice upon his uncle Prince 'Abd al-Ilah, and General Nuri al-Sa'id, a veteran politician and nationalist who had already served several terms as Prime Minister. As oil revenues increased during the 1950s, the king and his advisers chose to invest their wealth in development projects, which some claimed increasingly alienated the rapidly growing middle class and the peasantry. The Iraqi Communist Party increased its influence. Though the regime seemed secure, intense dissatisfaction with Iraq's condition brewed just below the surface. An ever-widening gap between the wealth possessed by the political elites, landowners and other supporters of the regime on the one hand, and the poverty of workers and peasants on the other, intensified opposition to Faisal's government. Since the upper classes controlled the parliament, reformists increasingly saw revolution as their sole hope for improvement. The toppling of Egypt's monarchy in 1952–53 by Gamal Abdel Nasser provided an impetus for a similar undertaking in Iraq.

On 1 February 1958, neighbouring Syria joined with Nasser's Egypt to form the United Arab Republic. This prompted the Hashemite kingdoms of Iraq and Jordan to strengthen their ties by establishing a similar alliance. Two weeks later, on 14 February, this league formally became the Arab Federation of Iraq and Jordan. Faisal, as the senior member of the Hashemite family, became its head of state.

Faisal's political situation deteriorated in 1956, with uprisings in the cities of Najaf and Hayy. Meanwhile, Israel's attack on Egypt, coordinated with Britain and France in response to Nasser's nationalisation of the Suez Canal, only exacerbated popular revulsion of the Baghdad Pact – and thus, Faisal's regime. The opposition began to coordinate its activities; in February 1957, a "Front of National Union" was established, bringing together the National Democrats, Independents, Communists, and the Ba'ath Party. An identical process ensued within the Iraqi officer corps, with the formation of a "Supreme Committee of Free Officers". Faisal's government endeavoured to preserve the military's loyalty through generous benefits, but this proved increasingly ineffective as more and more officers came to sympathise with the nascent anti-monarchist movement.

In the summer of 1958, King Hussein of Jordan asked for Iraqi military assistance during the escalating Lebanon crisis. Units of the Iraqi Army under the command of Abd al-Karim Qasim, en route to Jordan, chose to march on Baghdad instead, where they mounted a coup d'état on 14 July 1958. During the 14 July Revolution, Faisal II ordered the royal guard to offer no resistance, and Faisal himself surrendered to the insurgents.[citation needed] Around 8 am, Captain Abdul Sattar Sabaa Al-Ibousi, leading the revolutionary assault group at the palace, ordered the King, Prince 'Abd al-Ilah, Princess Hiyam ('Abd al-Ilah's wife), Princess Nafeesa ('Abd al-Ilah's mother), Princess Abadiya (Faisal's aunt) and several servants to gather in the palace courtyard. Here, they were told to turn towards the wall, where all were immediately machine-gunned by their captors. Faisal, who had not died during the initial fusillade, was transported to a hospital, but died en route. His body was publicly displayed through being strung up from a lamp post.[4]

Princess Hiyam survived her injuries, caused during the massacre, and was able to escape the country.[citation needed] Many years later, when the Iraqi historian Safa Khulusi met Al-Ibousi, who was once one of Khulusi's students, and questioned him on his part in Faisal's death, the former student answered "all I did was remember Palestine, and the trigger on the machine-gun just set itself off".[5]

Nuri al-Said, Faisal's Prime Minister, was killed by Qassim's supporters the day after the king's death. The Hashemite monarchy in Iraq, having been inspired by the occupying British administration following the end of Ottoman rule, and supported by a national referendum in 1921, was abolished by revolution without popular consent.[citation needed] Control over the country passed to a tripartite "Sovereignty Council," composed of representatives of Iraq's three major ethnic groups. A lengthy period of political instability ensued, culminating in the ultimate triumph in 1968 of the Ba'ath Party, which in turn led to the eventual coming to power of Saddam Hussein.[citation needed]

Faisal first asked for the hand of Princess Shahnaz Pahlavi, daughter of the Iranian Shah Mohammad Reza Pahlavi, but was turned down by Shahnaz.

Faisal then was betrothed to Princess Kıymet Hanım, a descendant of the last Mamluk dynasty of Iraq, in January 1958. This engagement was called off three months later.

At the time of his death, King Faisal was engaged to be married to HH Princess Sabiha Fazila Hanım Sultan, the only daughter of HE Damat HH Prince Muhammad 'Ali Ibrahim Beyefendi of Egypt and HIH Princess Zahra Hanzade Sultan.

Martyr Faisal II College (Kolleyet Al-Shahid Faisal Al-Thani) is a military school in Jordan that was named after him.