From Infogalactic: the planetary knowledge core
(Redirected from Fermentation (biochemistry))
Jump to: navigation, search
For other uses, see Fermentation (disambiguation). 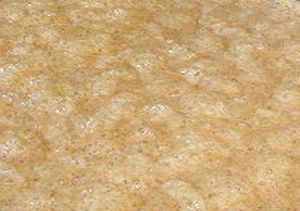 Fermentation in progress: Bubbles of CO2 form a froth on top of the fermentation mixture. 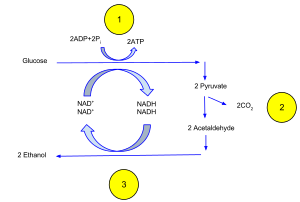 Overview of ethanol fermentation. One glucose molecule breaks down into two pyruvate molecules (1). The energy from this exothermic reaction is used to bind inorganic phosphates to ATP and convert NAD+ to NADH. The two pyruvates are then broken down into two acetaldehyde molecules and give off two CO2 molecules as a waste product (2). The acetaldehyde is then reduced into ethanol using the energy and hydrogen from NADH; in this process the NADH is oxidized into NAD+ so that the cycle may repeat (3).

Fermentation is a metabolic process that converts sugar to acids, gases or alcohol. It occurs in yeast and bacteria, and also in oxygen-starved muscle cells, as in the case of lactic acid fermentation. Fermentation is also used more broadly to refer to the bulk growth of microorganisms on a growth medium, often with the goal of producing a specific chemical product. French microbiologist Louis Pasteur is often remembered for his insights into fermentation and its microbial causes. The science of fermentation is known as zymology.

Fermentation takes place in the lack of oxygen (when the electron transport chain is unusable) and becomes the cell’s primary means of ATP (energy) production.[1] It turns NADH and pyruvate produced in the glycolysis step into NAD+ and various small molecules depending on the type of fermentation (see examples below). In the presence of O2, NADH and pyruvate are used to generate ATP in respiration. This is called oxidative phosphorylation, and it generates much more ATP than glycolysis alone. For that reason, cells generally benefit from avoiding fermentation when oxygen is available, the exception being obligate anaerobes which cannot tolerate oxygen.

The first step, glycolysis, is common to all fermentation pathways:

Pyruvate is CH3COCOO−. Pi is phosphate. Two ADP molecules and two Pi are converted to two ATP and two water molecules via substrate-level phosphorylation. Two molecules of NAD+ are also reduced to NADH.[2]

In oxidative phosphorylation the energy for ATP formation is derived from an electrochemical proton gradient generated across the inner mitochondrial membrane (or, in the case of bacteria, the plasma membrane) via the electron transport chain. Glycolysis has substrate-level phosphorylation (ATP generated directly at the point of reaction).

Humans have used fermentation to produce food and beverages since the Neolithic age. For example, fermentation is used for preservation in a process that produces lactic acid as found in such sour foods as pickled cucumbers, kimchi and yogurt (see fermentation in food processing), as well as for producing alcoholic beverages such as wine (see fermentation in winemaking) and beer. Fermentation can even occur within the stomachs of animals, such as humans. Auto-brewery syndrome is a rare medical condition where the stomach contains brewers yeast that break down starches into ethanol; which enters the blood stream.[3]

To many people, fermentation simply means the production of alcohol: grains and fruits are fermented to produce beer and wine. If a food soured, one might say it was 'off' or fermented. Here are some definitions of fermentation. They range from informal, general usage to more scientific definitions.[4]

Fermentation does not necessarily have to be carried out in an anaerobic environment. For example, even in the presence of abundant oxygen, yeast cells greatly prefer fermentation to aerobic respiration, as long as sugars are readily available for consumption (a phenomenon known as the Crabtree effect).[5] The antibiotic activity of hops also inhibits aerobic metabolism in yeast[citation needed].

Fermentation reacts NADH with an endogenous, organic electron acceptor.[1] Usually this is pyruvate formed from the sugar during the glycolysis step. During fermentation, pyruvate is metabolized to various compounds through several processes:

Sugars are the most common substrate of fermentation, and typical examples of fermentation products are ethanol, lactic acid, carbon dioxide, and hydrogen gas (H2). However, more exotic compounds can be produced by fermentation, such as butyric acid and acetone. Yeast carries out fermentation in the production of ethanol in beers, wines, and other alcoholic drinks, along with the production of large quantities of carbon dioxide. Fermentation occurs in mammalian muscle during periods of intense exercise where oxygen supply becomes limited, resulting in the creation of lactic acid.[6]

Fermentation products contain chemical energy (they are not fully oxidized), but are considered waste products, since they cannot be metabolized further without the use of oxygen.

The chemical equation below shows the alcoholic fermentation of glucose, whose chemical formula is C6H12O6.[8] One glucose molecule is converted into two ethanol molecules and two carbon dioxide molecules:

C2H5OH is the chemical formula for ethanol.

Before fermentation takes place, one glucose molecule is broken down into two pyruvate molecules. This is known as glycolysis.[8][9]

Homolactic fermentation (producing only lactic acid) is the simplest type of fermentation. The pyruvate from glycolysis[10] undergoes a simple redox reaction, forming lactic acid.[2][11] It is unique because it is one of the only respiration processes to not produce a gas as a byproduct. Overall, one molecule of glucose (or any six-carbon sugar) is converted to two molecules of lactic acid: C6H12O6 → 2 CH3CHOHCOOH
It occurs in the muscles of animals when they need energy faster than the blood can supply oxygen. It also occurs in some kinds of bacteria (such as lactobacilli) and some fungi. It is this type of bacteria that converts lactose into lactic acid in yogurt, giving it its sour taste. These lactic acid bacteria can carry out either homolactic fermentation, where the end-product is mostly lactic acid, or

Heterolactic fermentation, where some lactate is further metabolized and results in ethanol and carbon dioxide[2] (via the phosphoketolase pathway), acetate, or other metabolic products, e.g.: C6H12O6 → CH3CHOHCOOH + C2H5OH + CO2
If lactose is fermented (as in yogurts and cheeses), it is first converted into glucose and galactose (both six-carbon sugars with the same atomic formula): C12H22O11 + H2O → 2 C6H12O6
Heterolactic fermentation is in a sense intermediate between lactic acid fermentation, and other types, e.g. alcoholic fermentation (see below). The reasons to go further and convert lactic acid into anything else are:

In aerobic respiration, the pyruvate produced by glycolysis is oxidized completely, generating additional ATP and NADH in the citric acid cycle and by oxidative phosphorylation. However, this can occur only in the presence of oxygen. Oxygen is toxic to organisms that are obligate anaerobes, and is not required by facultative anaerobic organisms. In the absence of oxygen, one of the fermentation pathways occurs in order to regenerate NAD+; lactic acid fermentation is one of these pathways.[2]

As an example of mixed acid fermentation, bacteria such as Clostridium pasteurianum ferment glucose producing butyrate, acetate, carbon dioxide and hydrogen gas:[13] The reaction leading to acetate is:

Glucose could theoretically be converted into just CO2 and H2, but the global reaction releases little energy.

This disproportionation reaction is catalysed by methanogen archaea in their fermentative metabolism. One electron is transferred from the carbonyl function (e− donor) of the carboxylic group to the methyl group (e− acceptor) of acetic acid to respectively produce CO2 and methane gas.

The first solid evidence of the living nature of yeast appeared between 1837 and 1838 when three publications appeared by C. Cagniard de la Tour, T. Swann, and F. Kuetzing, each of whom independently concluded as a result of microscopic investigations that yeast is a living organism that reproduces by budding. It is perhaps because wine, beer, and bread were each basic foods in Europe that most of the early studies on fermentation were done on yeasts, with which they were made. Soon, bacteria were also discovered; the term was first used in English in the late 1840s, but it did not come into general use until the 1870s, and then largely in connection with the new germ theory of disease.[23]

Louis Pasteur (1822–1895), during the 1850s and 1860s, showed that fermentation is initiated by living organisms in a series of investigations.[11] In 1857, Pasteur showed that lactic acid fermentation is caused by living organisms.[24] In 1860, he demonstrated that bacteria cause souring in milk, a process formerly thought to be merely a chemical change, and his work in identifying the role of microorganisms in food spoilage led to the process of pasteurization.[25] In 1877, working to improve the French brewing industry, Pasteur published his famous paper on fermentation, "Etudes sur la Bière", which was translated into English in 1879 as "Studies on fermentation".[26] He defined fermentation (incorrectly) as "Life without air",[27] but correctly showed that specific types of microorganisms cause specific types of fermentations and specific end-products.

Although showing fermentation to be the result of the action of living microorganisms was a breakthrough, it did not explain the basic nature of the fermentation process, or prove that it is caused by the microorganisms that appear to be always present. Many scientists, including Pasteur, had unsuccessfully attempted to extract the fermentation enzyme from yeast.[27] Success came in 1897 when the German chemist Eduard Buechner ground up yeast, extracted a juice from them, then found to his amazement that this "dead" liquid would ferment a sugar solution, forming carbon dioxide and alcohol much like living yeasts.[28] Buechner's results are considered to mark the birth of biochemistry. The "unorganized ferments" behaved just like the organized ones. From that time on, the term enzyme came to be applied to all ferments. It was then understood that fermentation is caused by enzymes that are produced by microorganisms.[29] In 1907, Buechner won the Nobel Prize in chemistry for his work.[30]

Advances in microbiology and fermentation technology have continued steadily up until the present. For example, in the late 1970s, it was discovered that microorganisms could be mutated with physical and chemical treatments to be higher-yielding, faster-growing, tolerant of less oxygen, and able to use a more concentrated medium.[31] Strain selection and hybridization developed as well, affecting most modern food fermentations. Other approaches to advancing the fermentation industry has been done by companies such as BioTork, a biotechnology company that naturally evolves microorganisms to improve fermentation processes. This approach differs from the more popular genetic modification, which has become the current industry standard.

The word ferment is derived from the Latin verb fervere, which means 'to boil'. It is thought to have been first used in the late fourteenth century in alchemy, but only in a broad sense. It was not used in the modern scientific sense until around 1600.