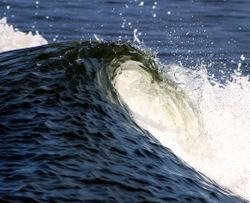 The fetch, also called the fetch length, is the length of water over which a given wind has blown. Fetch is used in geography and meteorology and its effects are usually associated with sea state and when it reaches shore it is the main factor that creates storm surge which leads to coastal erosion and flooding. It also plays a large part in longshore drift as well.

Fetch length, along with the wind speed (wind strength), determines the size (sea state) of waves produced. The wind direction is considered constant. The longer the fetch and the faster the wind speed, the more wind energy is imparted to the water surface and the larger the resulting sea state will be.