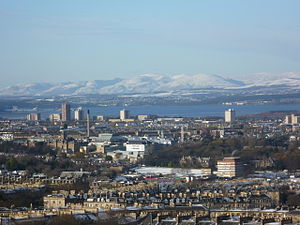 Firth of Forth from Edinburgh Castle

The Forth Bridges across the Firth 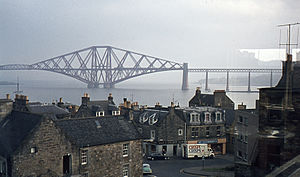 The Forth Bridge (photograph 1972) Satellite photo of the Firth and the surrounding area 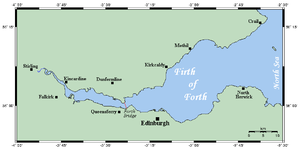 Map of the Firth 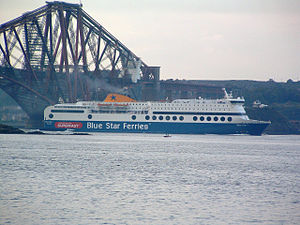 The Ro-Pax ferry Blue Star 1 passing under the Forth Bridge in the Firth, en route from Rosyth to Zeebrugge.

The Firth of Forth (Scottish Gaelic: Linne Foirthe) is the estuary or firth of Scotland's River Forth, where it flows into the North Sea, between Fife to the north and Lothian to the south. It was known as Bodotria in Roman times.

Geologically, the Firth of Forth is a fjord, formed by the Forth Glacier in the last glacial period.

There are many towns which line the shores, as well as the petrochemical complexes at Grangemouth, the commercial docks at Leith, former oilrig construction yards at Methil, the ship-breaking facility at Inverkeithing and the naval dockyard at Rosyth, with numerous other industrial areas including the Forth Bridgehead area (that is, Rosyth, Inverkeithing and the southern edge of Dunfermline), Burntisland, Kirkcaldy, Bo'ness and Leven.

The Kincardine Bridge, the Forth Road Bridge and the Forth Bridge carry traffic across the firth. A fourth crossing, located next to the Kincardine Bridge, opened in 2008. On 1 October 2008, it was announced that the new bridge would be called the Clackmannanshire Bridge.[1] Queensferry Crossing, another new road bridge, is under construction alongside the Forth Road Bridge and is expected to be open in 2016.[2]

In July 2007, a hovercraft passenger service completed a two-week trial between Portobello, Edinburgh and Kirkcaldy, Fife. The trial of the service (marketed as "Forthfast") was hailed as a major operational success, with an average passenger load of 85%.[3] It was estimated the service could cut congestion for commuters on the Forth road and rail bridges by carrying about 870,000 passengers a year.[4] The plans were shelved in December 2011.

The inner firth, that is, between the Kincardine and Forth bridges, has lost about half of its former intertidal area as a result of land being reclaimed, partly for agriculture, but mainly for industry and the large ash lagoons built to deposit the spoil from the coal-fired Longannet Power Station near Kincardine. Historic villages line the Fife shoreline; Limekilns, Charlestown and the 6th century established Culross, where Saint Kentigern was born.

The firth is important for nature conservation and is a Site of Special Scientific Interest. The Firth of Forth Islands SPA (Special Protection Area) is host to over 90,000 breeding seabirds every year. There is a bird observatory on the Isle of May.

The youngest person to swim across the Firth of Forth was Joseph Feeney in 1933 aged 13 years old.

In 2008, a controversial bid to allow oil transfer between ships in the firth was refused by Forth Ports. A company named SPT Marine Services had asked permission to transfer 7.8 million tonnes of crude oil per year between tankers. The proposals were met with determined opposition from conservation groups.[5]

Firth of Forth islands

Main article: Islands of the Forth

Settlements on the shoreline