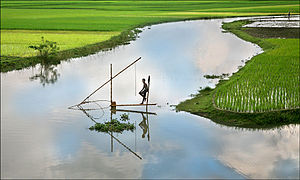 Fishing with a lift net in Bangladesh. Coastal fishing communities in Bangladesh are vulnerable to flooding from sea-level rises.[1]

Rising ocean temperatures[2] and ocean acidification[3] are radically altering aquatic ecosystems. Climate change is modifying fish distribution[4] and the productivity of marine and freshwater species. This has impacts on the sustainability of fisheries and aquaculture, on the livelihoods of the communities that depend on fisheries, and on the ability of the oceans to capture and store carbon (biological pump). The effect of sea level rise means that coastal fishing communities are in the front line of climate change, while changing rainfall patterns and water use impact on inland (freshwater) fisheries and aquaculture. 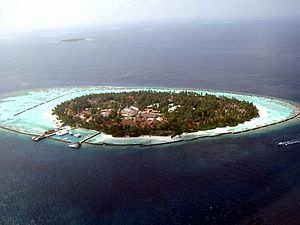 Island with fringing reef in the Maldives. Coral reefs are dying around the world.[5]
See also: Effects of global warming § Oceans

Oceans and coastal ecosystems play an important role in the global carbon cycle and have removed about 25% of the carbon dioxide emitted by human activities between 2000 and 2007 and about half the anthropogenic CO2 released since the start of the Industrial Revolution. Rising ocean temperatures and ocean acidification means that the capacity of the ocean carbon sink will gradually get weaker,[6] giving rise to global concerns expressed in the Monaco[7] and Manado[8] Declarations. Healthy ocean ecosystems are essential for the mitigation of climate change.[9] Coral reefs provide habitat for millions of fish species and with climate change it can provoke these reefs to die.

The rising ocean acidity makes it more difficult for marine organisms such as shrimps, oysters, or corals to form their shells – a process known as calcification. Many important animals, such as zooplankton, that forms the base of the marine food chain have calcium shells. Thus the entire marine food web is being altered – there are ‘cracks in the food chain’. As a result, the distribution,[10] productivity, and species composition of global fish production is changing,[11] generating complex and inter-related impacts[12] on oceans, estuaries, coral reefs, mangroves and sea grass beds that provide habitats and nursery areas for fish. Changing rainfall patterns and water scarcity is impacting on river and lake fisheries and aquaculture production.[13][14] After the ice age about 200,000 years ago, the global air temperature has risen 3 degrees, leading to an increase in sea temperatures.[15] 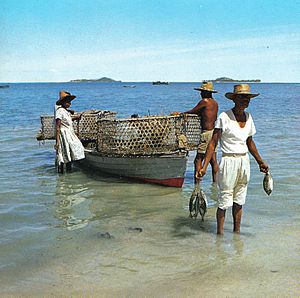 Coastal and fishing populations[16] and countries dependent on fisheries[17] are particularly vulnerable to climate change. Low-lying countries such as the Maldives[18] and Tuvalu are particularly vulnerable and entire communities may become the first climate refugees. Fishing communities in Bangladesh are subject not only to sea-level rise, but also flooding and increased typhoons. Fishing communities along the Mekong river produce over 1 million tons of basa fish annually and livelihoods and fish production will suffer from saltwater intrusion resulting from rising sea level and dams.[19]

Fisheries and aquaculture contribute significantly to food security and livelihoods. Fish provides essential nutrition for 3 billion people and at least 50% of animal protein and minerals to 400 million people from the poorest countries.[20] Over 500 million people in developing countries depend, directly or indirectly, on fisheries and aquaculture for their livelihoods - aquaculture is the world’s fastest growing food production system, growing at 7% annually and fish products are among the most widely traded foods, with more than 37% (by volume) of world production traded internationally.[21]

The impacts of climate change can be addressed through adaptation and mitigation. The costs and benefits of adaptation are essentially local or national, while the costs of mitigation are essentially national whereas the benefits are global. Some activities generate both mitigation and adaptation benefits, for example, the restoration of mangrove forests can protect shorelines from erosion and provide breeding grounds for fish while also sequestering carbon.

Several international agencies, including the World Bank and the Food and Agriculture Organization[22] have programs to help countries and communities adapt to global warming, for example by developing policies to improve the resilience[23] of natural resources, through assessments of risk and vulnerability, by increasing awareness[24] of climate change impacts and strengthening key institutions, such as for weather forecasting and early warning systems.[25] The World Development Report 2010 - Development and Climate Change, Chapter 3[26] shows that reducing overcapacity in fishing fleets and rebuilding fish stocks can both improve resilience to climate change and increase economic returns from marine capture fisheries by US$50 billion per year, while also reducing GHG emissions by fishing fleets. Consequently removal of subsidies on fuel for fishing can have a double benefit by reducing emissions and overfishing.

Investment in sustainable aquaculture[27] can buffer water use in agriculture while producing food and diversifying economic activities. Algal biofuels also show potential as algae can produce 15-300 times more oil per acre than conventional crops, such as rapeseed, soybeans, or jatropha and marine algae do not require scarce freshwater. Programs such as the GEF-funded Coral Reef Targeted Research provide advice on building resilience and conserving coral reef ecosystems,[28] while six Pacific countries recently gave a formal undertaking to protect the reefs in a biodiversity hotspot – the Coral Triangle.[29]

The White Cliffs of Dover

The oceans have removed 50%[30] of the anthropogenic CO2, so the oceans have absorbed much of the impact of climate change. The famous White Cliffs of Dover illustrate how the ocean captures and buries carbon. These limestone cliffs are formed from the skeletons of marine plankton called coccoliths. Similarly, petroleum formation is attributed largely to marine and aquatic plankton further illustrating the key role of the oceans in carbon sequestration.

Exactly how the oceans capture and bury CO2 is the subject of intense research[31] by scientists worldwide, such as the Carboocean Project.[32] The current level of GHG emissions means that ocean acidity will continue to increase and aquatic ecosystems will continue to degrade and change. There are feedback mechanisms involved here. For example, warmer waters can absorb less CO2, so as ocean temperatures rise some dissolved CO2 will be released back into the atmosphere. Warming also reduces nutrient levels in the mesopelagic zone (about 200 to 1000 m deep). This in turn limits the growth of diatoms in favour of smaller phytoplankton that are poorer biological pumps of carbon. This inhibits the ability of the ocean ecosystems to sequester carbon as the oceans warm.[33] What is clear, is that healthy ocean and coastal ecosystems are necessary to continue the vital role of the ocean carbon sinks, as indicated, for example, by the Blue Carbon[34] assessment prepared by UNEP and the coastal carbon sinks report[35] of IUCN and growing evidence of the role of fish biomass[36] in the transport of carbon from surface waters to the deep ocean.

While the various carbon finance instruments include restoration of forests (REDD) and producing clean energy (emissions trading), few address the need to finance healthy ocean and aquatic ecosystems although these are essential for continued uptake of CO2 and GHGs. The scientific basis for ocean fertilization – to produce more phytoplankton to increase the uptake of CO2 – has been challenged, and proposals for burial of CO2 in the deep ocean have come under criticism from environmentalists. The debate on these issues has underlined the need to increase scientific understanding of how the ocean sequesters carbon.

Although there is a decline of fisheries due to climate change, another impact for this decrease is due to over-fishing. Studies show that the state of the ocean is causing fisheries to collapse, and in areas where fisheries have not yet collapsed, the amount of over fishing that is done is having a significant impact on the industry.[37] Over-fishing is due to having access to the open sea, it makes it very easy for people to over fish, even if it is just for fun. There is also a high demand for sea food by fishermen, as well modern technology that has increased the amount of fish caught during each trip.[37]

If there was a specific amount of fish that people were allowed to catch then this could very well solve the problem of over fishing.[37] This type of limit system is in place in a few countries including New Zealand, Norway, Canada, and the United States. In these countries the limit system has successfully helped in fishing industries.[37] These types of limit systems are called Individual fishing quota. This means that the areas where this quota exist, the government has legal entity over it and in these boundaries they are entitled to utilize their ocean resources as they wish.[37]