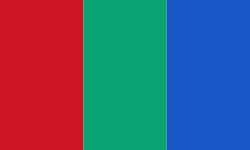 The flag of Mars is a tricolour used to represent the planet Mars, its exploration, and its eventual transformation into a more Earth-like world.[1] It is not official in a legal sense, as the Outer Space Treaty forbids the 'national appropriation' of celestial bodies by states, although it leaves open the possibility of claims by private entities such as companies or individuals.[2]

The design of the flag was originally conceived by NASA planetary scientist Pascal Lee during the 1998 Haughton-Mars Project arctic expedition to Devon Island, Canada.[1] In addition to symbolizing liberty as a tricolour flag, the design evokes a vision of the "future history" of Mars in which the planet is transformed from red, to green, and then blue like the Earth. The red bar, which lies closest to the mast, symbolizes Mars as it is today. The green and blue symbolize stages in the possible terraforming of Mars, should humanity ever have the ability and will to undertake such a task; the ethics of terraforming remaining a matter of debate. Kim Stanley Robinson's popular science-fiction trilogy Red Mars, Green Mars, and Blue Mars also provided inspiration for the flag. In the Pantone Color Matching System (PCMS), the red is the "Red Clay" (18-1454), the green is the "Mint Green" (17-6333), and the blue is the "Imperial Blue" (19-4245).[1]

There is no official flag for Mars since there is no government or other authority in existence capable of adopting such a flag. In addition, the Outer Space Treaty states in Article II that "outer space, including the Moon and other celestial bodies, are not subject to national appropriation by claim of sovereignty, by means of use or occupation, or by any other means."

Whilst this specifically prohibits "national appropriation" of extraterrestrial territory by nations, it does not specifically outlaw such appropriation by other entities, such as companies or individuals. Such claims are currently speculative, as there is no human population in-situ to enforce them, but this is the basis on which some companies claim to sell extraterrestrial real estate. 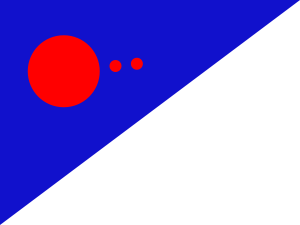 One interpretation of the Flag of the Federal Republic of Mars, as described in the book Moving Mars

In his science-fiction novel Moving Mars, Greg Bear describes the flag of the fictional Federal Republic of Mars as follows: "red Mars and two moons in blue field above a diagonal, white below". 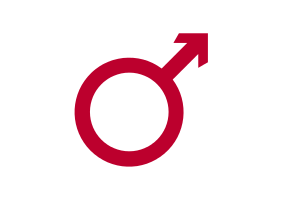 From Stranger in a Strange Land: "The field in white and the sigil of Mars in red"

In Robert A. Heinlein's novel Stranger in a Strange Land, a flag of Mars is hastily improvised, consisting of the "traditional human symbol for Mars" in red on a white sheet.[3]