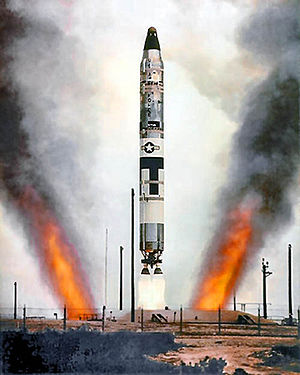 Flexible response represented a capability to fight across all spectrums of warfare, not just with nuclear arms such as this Titan II missile.

Flexible response was a defense strategy implemented by John F. Kennedy in 1961 to address the Kennedy administration's skepticism of Dwight Eisenhower's New Look and its policy of Massive Retaliation. Flexible response calls for mutual deterrence at strategic, tactical, and conventional levels, giving the United States the capability to respond to aggression across the spectrum of warfare, not limited only to nuclear arms.

The New Look policy, though initially useful, quickly became obsolete with the introduction of inter-continental delivery systems that undermined the credibility of a deterrence threat. The cornerstone of U.S. and European defense strategy was then threatened as the U.S. could no longer rely on nuclear threats to provide security for it and its allies.

John F. Kennedy won the presidency by claiming that the Republican Party had allowed the U.S. to fall behind the Soviets into a missile gap. Upon entering office Kennedy cited General Maxwell Taylor's book The Uncertain Trumpet to Congress for its conclusion that massive retaliation left the U.S. with only two choices: defeat on the ground or the resort to the use of nuclear weapons. Technology had improved since massive retaliation was adopted. Improvements in communication and transportation meant U.S. forces could be deployed more effectively, quickly, and flexibly than before. Advisers persuaded Kennedy that having multiple options would allow the president to apply the appropriate amount of force at the right place without risking escalation or losing alternatives. This would improve credibility for deterrence as the U.S. would now have low-intensity options and therefore would be more likely to use them, rather than massive retaliation's all-or-nothing options.

Flexible Response was implemented to develop several options across the spectrum of warfare, other than the nuclear option, for quickly dealing with enemy aggression. In addition, the survivability of the retaliatory capability was stressed, leading to the diversification of the strategic force, development of the strategic triad, and half the Strategic Air Command force being put on permanent alert status.

The Kennedy doctrine did not include the ability to fight nuclear wars because of the idea that it would undermine deterrence, was technologically unworkable, would fuel the arms race, and was not politically feasible.

Importance was also placed on counterinsurgency and the development of unconventional military forces, unconventional tactics, and “civic action” programs.

Stages in the Flexible Response

A staged plan was devised to counter any Soviet military action other than a first strike. It consisted of three stages:

Direct defense: In case of a conventional Soviet attack (meaning non-nuclear or this would be considered a first strike) initial efforts would be to try and stop the Soviet advance with conventional weapons. This meant that the foreseen Soviet attack on West-Germany would be tried to be forced to a halt by NATO's European forces, Allied Command Europe.

Deliberate Escalation: This phase was entered when conventional NATO forces were succumbing under the Soviet attack. This was actually expected as intelligence indicated Soviet divisions outnumbered NATO divisions by far. In this phase NATO forces would switch to a limited use of nuclear weapons, such as recently developed tactical nuclear weapons (like nuclear artillery).

General Nuclear Response: This was the last phase or stage which more or less corresponded to the mutual assured destruction scenario, meaning the total nuclear attack on the Communist world. If the Soviets had not already done so, this would make them switch to all-out attack as well.

Development of the strategic triad

By 1960, the United States had three means of strategic forces: ICBMs, SLBMs, and strategic bombers. This triad made it possible for the United States to impose unacceptable damage to the Soviet Union with one strategic force independent of the other two forces. These different forces had their advantages and disadvantages. Bombers could deliver large payloads and strike with great accuracy, but were slow, vulnerable while on the ground, and could be shot down. ICBMs are safe in their underground silos while on the ground, but were less accurate than bombers and could not be called back when launched. Submarines were least vulnerable but were also least accurate and communication could be poor at times. Each of these forces provided the United States with different options to tailor their response to the situation.

Part of Flexible Response was the strategy of being able to fight over the entire spectrum of violence by developing diverse forces for different types of warfare. This meant being able to fight multiple wars simultaneously; specifically, the US should have the peacetime capability to fight two large regional wars and a small brushfire war at the same time. The consequence of this was to increase recruiting, investment, and research for the US force posture.

The strategic doctrine for Kennedy’s Flexible Response was Assured Destruction. Flexible response made second strike capability its guiding principle of deterrence. In the event of Soviet nuclear aggression, the Soviets would know that enough U.S. nuclear capability would survive their strike to destroy their cities and industry. Robert McNamara argued for the definition of what was “unacceptable” to the enemy as the destruction of 50% of industry and 25% of the population. Deterrence depended on influence to show that violence and aggression did not pay, and being explicit about the level of destruction the US was willing to inflict on the enemy was one way to illustrate this point. Assured Destruction relied on deterrence by punishment, precision, and credibility.

Defense Secretary McNamara sought to limit damage to the U.S. by developing a separate strategy for offense and defense. The offensive strategy was one of Counterforce, seeking to destroy Soviet military installations and hardware and thus disable this hardware before it could be used. In a 1962 speech to the University of Michigan, Ann Arbor, McNamara announced that the U.S. would refrain from striking Countervalue targets (cities) early in nuclear war, reserving such force later in war should the Soviets not show similar restraint. This would not only induce the Soviets to spare American cities, but would secure the United States bargaining advantage by holding hostage something that the Soviets might want to keep.

The defensive strategy involved developing a system to intercept incoming Soviet missiles. Bombers could be easily shot down, but missiles still remained a credible threat. The United States began developing anti-ballistic missile program, modifying its Nike missiles to intercept incoming missiles. Ultimately this program was abandoned by the adoption of the anti-ballistic missile treaty.