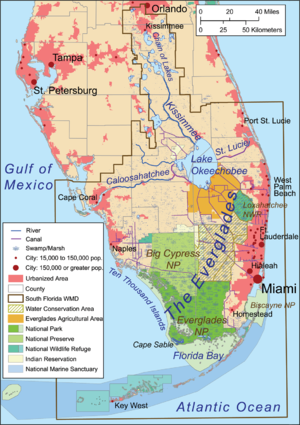 Southern third of Florida, showing Florida Bay in pale green off the southern tip of the mainland

Environmental issues are problematic. Florida Bay used to be teeming with Roseate Spoonbills nesting and other birds and even American Flamingos used to be reported nesting, and the fishing excellent. However, due to fertilizer runoff of agriculture there are expanding dead zones in the bay, creating algae blooms on which bacteria feed, grow and then consume all the oxygen in the water. further microbes thrive in this oxygen free environment, but produce toxic gases where nothing grows. Fish and crustaceans leave, and the birds leave having no food source. [4] Canals divert water to the Eastern coast that originally went to Taylor Slough that brought freshwater to the bay through Everglades National Park. Without the freshwater, the water becomes stagnant and salty with excess nitrogen from the fertilizer. [5]