Folk religion, alongside popular religion and vernacular religion, are terms used within religious studies and folkloristics to describe various forms and expressions of religion that are deemed distinct from the official doctrines and practices of organized religion. The precise definition of folk religion varies among scholars. Sometimes also termed popular belief, it consists of ethnic or regional religious customs under the umbrella of a religion, but outside of official doctrine and practices.[1]

The term "folk religion" is generally held to encompass two related but separate subjects. The first is the religious dimension of folk culture, or the folk-cultural dimensions of religion. The second refers to the study of syncretisms between two cultures with different stages of formal expression, such as the melange of African folk beliefs and Roman Catholicism that led to the development of Vodun and Santería, and similar mixtures of formal religions with folk cultures.

Chinese folk religion, Folk Christianity, Folk Hinduism, and Folk Islam are examples of folk religion associated with major religions. The term is also used, especially by the clergy of the faiths involved, to describe the desire of people who otherwise infrequently attend religious worship, do not belong to a church or similar religious society, and who have not made a formal profession of faith in a particular creed, to have religious weddings or funerals, or (among Christians) to have their children baptised.[1]

In The Concise Oxford Dictionary of World Religions, John Bowker characterized "folk religion" as either "religion which occurs in small, local communities which does not adhere to the norms of large systems" or "the appropriation of religious beliefs and practices at a popular level."[2]

Yoder's third religion was that often employed within folkloristics, which held that folk religion was "the interaction of belief, ritual, custom, and mythology in traditional societies", representing that which was often pejoratively characterised as superstition.[5] The fourth definition provided by Yoder stated that folk religion represented the "folk interpretation and expression of religion". Noting that this definition would not encompass beliefs that were largely unconnected from organised religion, such as in witchcraft, he therefore altered this definition by including the concept of "folk religiosity", thereby defining folk religion as "the deposit in culture of folk religiosity, the full range of folk attitudes to religion."[6] His fifth and final definition represented a "practical working definition" that combined elements from these various other definitions. Thus, he summarized folk religion as "the totality of all those views and practices of religion that exist among the people apart from and alongside the strictly theological and liturgical forms of the official religion."[7]

Alternately, the sociologist of religion Matthias Zic Varul defined "folk religion" as "the relatively un-reflected aspect of ordinary practices and beliefs that are oriented towards, or productive of, something beyond the immediate here-and-now: everyday transcendence."[9]

In Europe the study of "folk religion" emerged from the study of religiöse Volkskund, a German term which was used in reference to "the religious dimension of folk-culture, or the folk-cultural dimension of religion".[10] This term was first employed by a German Lutheran preacher, Paul Drews, in a 1901 article that he published which was titled "Religiöse Volkskunde, eine Aufgabe der praktischen Theologie". This article was designed to be read by young Lutheran preachers leaving the seminary, to equip them for the popular variants of Lutheranism that they would encounter among their congregations and which would differ from the official, doctrinal Lutheranism that they had been accustomed to.[11] Although developing within a religious environment, the term came to be adopted by German academics in the field of folkloristics.[12] During the 1920s and 1930s, theoretical studies of religiöse Volkskund had been produced by the folklorists Josef Weigert, Werner Boette, and Max Rumpf, all of whom had focused on religiosity within German peasant communities.[12] Over the coming decades, Georg Schreiber established an Institut für religiöse Volkskund in Munich while a similar department was established in Salzburg by Hanns Koren.[13] Other prominent academics involved in the study of the phenomenon were Heinrich Schauert and Rudolf Kriss, the latter of whom collected one of the largest collections of folk-religious art and material culture in Europe, later housed in Munich's Bayerisches Nationalmuseum.[13] Throughout the 20th century, many studies were made of folk religion in Europe, paying particular attention to such subjects as pilgrimage and the use of shrines.[12]

In the Americas, the study of folk religion developed among cultural anthropologists studying the syncretistic cultures of the Caribbean and Latin America.[14] The pioneer in this field was Redfield, whose 1930 book Tepoztlán: A Mexican Village contrasted and examined the relationship between "folk religion" and "official religion" in a peasant community.[14] Yoder later noted that although the earliest known usage of the term "folk religion" in the English language was unknown, it probably developed as a translation of the German Volksreligion.[14] One of the earliest prominent usages of the term was in the title of Joshua Trachtenberg's 1939 work Jewish Magic and Superstition: A Study in Folk Religion.[14] The term also gained increasing usage within the academic field of comparative religion, appearing in the titles of Ichiro Hori's Folk Religion in Japan, Martin Nilsson's Greek Folk Religion, and Charles Leslie's reader, the Anthropology of Folk Religion.[14] Courses on the study of folk religion came to be taught at various universities in the United States, such as John Messenger's at Indiana University and Don Yoder's at the University of Pennsylvania.[14] Although the subject of folk religion fell within the remit of scholars operating in both folkloristics and religious studies, by 1974 Yoder noted that U.S.-based academics in the latter continued to largely ignore it, instead focusing on the study of theology and institutionalised religion; he contrasted this with the situation in Europe, where historians of religion had devoted much time to studying folk religiosity.[15] He also lamented that many U.S.-based folklorists also neglected the subjected of religion because it did not fit within the standard genre-based system for cataloguing folklore.[16]

The term "folk religion" came to be increasingly rejected in the 1990s and 2000s by scholars seeking more precise terminology.[17]

Yoder noted that one problem with the use of the term "folk religion" was that it did not fit into the work of those scholars who used the term "religion" in reference solely to organized religion.[18] He highlighted the example of the prominent sociologist of religion Émile Durkheim, who insisted that "religion" was organized in order to contrast it with "magic".[18] Yoder noted that scholars adopting these perspectives often preferred the term "folk belief" over "folk religion".[18]

A second problem with the use of "folk religion" that Yoder highlighted was that some scholars, particularly those operating in the sociology of religion, used the term as a synonym for ethnic religion (which is alternately known as national religion or tribal religion), meaning a religion closely tied to a particular ethnic or national group and is thus contrasted with a "universal religion" which cuts across ethnic and national boundaries.[19] Among the scholars to have adopted this use of terminology are E. Wilbur Bock.[20]

The folklorist Leonard Norman Primiano argued that the use of "folk religion", as well as related terms like "popular religion" and "unofficial religion", by scholars, does "an extreme disservice" to the forms of religiosity that scholarship is examining, because – in his opinion – such terms are "residualistic, [and] derogatory".[21] He argued that using such terminology implies that there is "a pure element" to religion "which is in some way transformed, even contaminated, by its exposure to human communities".[22] As a corrective, he suggested that scholars use "vernacular religion" as an alternative.[23] Defining this term, Primiano stated that "vernacular religion" is, "by definition, religion as it is lived: as human beings encounter, understand, interpret, and practice it. Since religion inherently involves interpretation, it is impossible for the religion of an individual not to be vernacular."[24]

Kapaló was critical of this approach, deeming it "mistaken" and arguing that switching from "folk religion" to "vernacular religion" results in the scholar "picking up a different selection of things from the world".[25] He cautioned that both terms were "ideological and semantic load[ed]" and warned scholars to pay attention to the associations that each word had.[26]

Chinese folk religion or Shenism[27][28][29] are labels used to describe the collection of ethnic religious traditions which have historically comprised the predominant belief system in China and among Han Chinese ethnic groups up to the present day. Shenism describes Chinese mythology and includes the worship of shen (spirit, god, awareness, consciousness) which can be nature deities, Taizu or clan deities, city gods, national deities, culture heroes and demigods, dragons and ancestors. "Shenism" as a term was first published by AJA Elliot in 1955.[30]

Despite being heavily suppressed during the last two centuries, from the Taiping Rebellion to the Cultural Revolution, it is currently experiencing a modern revival in both Mainland China and Taiwan.[33][34] Various forms have received support by the Government of the People's Republic of China, such as Mazuism in Southern China (officially about 160 million Chinese are Mazuists),[35] Huangdi worship,[36][37] Black Dragon worship in Shaanxi,[38][39][40] and Cai Shen worship.[41] 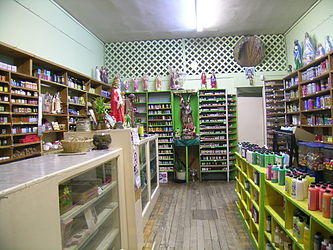 Botánicas such as this one in Jamaica Plain, Massachusetts, USA, sell religious goods such as statues of saints and candles decorated with prayers alongside folk medicine and amulets.

Folk Christianity is defined differently by various scholars. Definitions include "the Christianity practiced by a conquered people",[42] Christianity as most people live it – a term used to "overcome the division of beliefs into Orthodox and unorthodox",[43] Christianity as impacted by superstition as practiced by certain geographical Christian groups,[44] and Christianity defined "in cultural terms without reference to the theologies and histories."[45]

Folk Islam is an umbrella term used to collectively describe forms of Islam that incorporate native folk beliefs and practices.[46] Folk Islam has been described as the Islam of the "urban poor, country people, and tribes",[47] in contrast to orthodox or "High" Islam (Gellner, 1992)[48] Sufism and Sufi concepts are often integrated into Folk Islam.

Various practices and beliefs have been identified with the concept of "folk Islam". They include the following:

The Hindu epics and puranas have contributed to the foundation of Folk Hinduism.[55] Folk Hinduism also includes the Native Dravidian religion, Sanamahism, Bathouism, etc. But today, folk Hinduism ("Indian folk religion" or "popular Hinduism") may still be distinguished from "high" forms of Hindu philosophy, or mystical or ascetic forms.