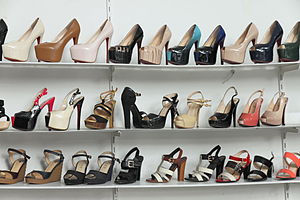 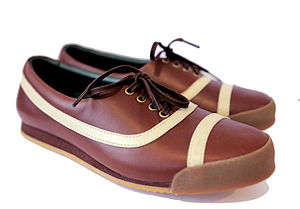 Sneakers are a type of footwear

Footwear refers to garments worn on the feet, for fashion, protection against the environment, and adornment. Cultures have different customs regarding footwear which include not using any in some situations.

Socks and other hosiery are typically worn between the feet and other footwear, less often with sandals or flip flops (thongs).

Durable shoes are a relatively recent invention, though many ancient civilizations wore ornamental footwear. Many ancient civilizations saw no need for footwear. The Romans saw clothing and footwear as signs of power and status in society, and most Romans wore footwear, while slaves and peasants remained barefoot.[1] The Middle Ages saw the rise of high-heeled shoes, also associated with power, and the desire to look larger than life, and artwork from that period often depicts bare feet as a symbol of poverty. Bare feet are also seen as a sign of humility and respect, and adherents of many religions worship or mourn while barefoot, or remove their shoes as a sign of respect towards someone of higher standing.

Footwear is sometimes the subject of sexual fetishism, such as shoe fetishism or boot fetishism.

In some cultures, people remove their shoes before entering a home. Some religious communities require people to remove shoes before they enter holy buildings, such as temples.

Practitioners of the craft of shoemaking are called shoemakers, cobblers, or cordwainers.

During the Middle Ages, men and women wore pattens, commonly seen as the predecessor of the modern high-heeled shoe,[2] while the poor and lower classes in Europe, as well as slaves in the New World, were barefoot.[3] In the 15th century, chopines were created in Turkey, and were usually 7-8 inches (17.7-20.3 cm) high. These shoes became popular in Venice and throughout Europe, as a status symbol revealing wealth and social standing.

During the 16th century, royalty such as Catherine de Medici and Mary I of England began wearing high-heeled shoes to make them look taller or larger than life. By 1580, men also wore them, and a person with authority or wealth might be described as, well-heeled.[2] In modern society, high-heeled shoes are a part of women's fashion and are widespread in certain countries around the world.

Footwear is usually made up of leather or plastic, and rubber. Historically, shoes were made up of wood.[when?] The soles can be made of rubber or plastic, sometimes having a sheet of metal inside. Roman sandals had sheets of metal on their soles so that it would not bend out of shape. 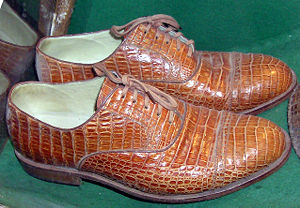 Shoes made from crocodile skin, in a conservation exhibit at Bristol Zoo, England 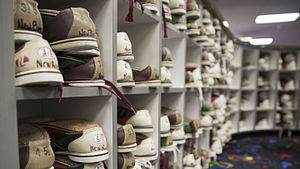 Bowling shoes are a type of athletic shoe 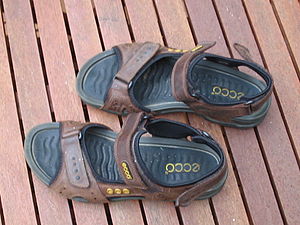 A pair of Sandals 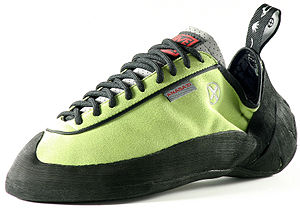 An artist's impression of Ötzi's right shoe. Ötzi is a male mummy found in the Austrian Alps in September 1991 in remarkably well-preserved condition. 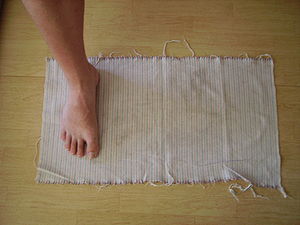 Footwraps used by the Finnish Army until the 1990s

In Europe, the footwear industry has declined in the last years. Whereas in 2005, there were about 27,000 firms, in 2008 there were only 24,000. As well as the number of firms, the direct employment has decreased. The only factors that remained almost steady was the value added at factor cost and production value.[4]

In the U.S., the annual footwear industry revenue was $48 billion in 2012. There are about 29,000 shoe stores in the U.S. and the shoe industry employs about 189,000 people.[5] Due to rising imports, these numbers are also declining. The only way of staying afloat in the shoe market is to establish a presence in niche markets.[6]

To ensure high quality and safety of footwear, manufacturers have to make sure all products comply to existing and relevant standards. By producing footwear in accordance with national and international regulations, potential risks can be minimized and the interest of both textile manufacturers and consumers can be protected. The following standards/regulations apply to footwear products: