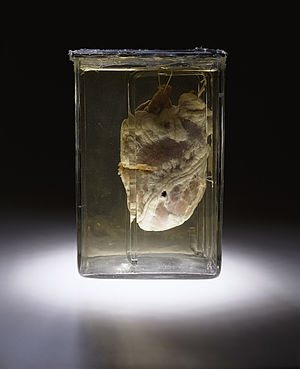 The heart of a murder victim

Forensic pathology is a sub-specialty of pathology that focuses on determining the cause of death by examining a corpse. The autopsy is performed by a medical examiner, usually during the investigation of criminal law cases and civil law cases in some jurisdictions. Coroners and medical examiners are also frequently asked to confirm the identity of a corpse. Also see forensic medicine.

The word forensics is derived from the Latin forēnsis meaning of or before the forum..[1]

In an autopsy, he/she is often assisted by an autopsy/mortuary technician (sometimes called a diener in the USA).

Forensic physicians, sometimes referred to as 'forensic medical examiners' or 'police surgeons' (in the UK until recently), are medical doctors trained in the examination of, and provision of medical treatment to, living victims of assault (including sexual assault) and those individuals who find themselves in police custody. Many forensic physicians in the UK practise clinical forensic medicine part-time, whilst they also practice family medicine, or another medical specialty.

In the United Kingdom, Membership of the Royal College of Pathologists is not a prerequisite of appointment as a Coroner's Medical Expert, i.e. doctors in the UK that are not forensic pathologists or pathologists are allowed to perform medicolegal autopsies, simply because of the vague wording of 'The Coroners Act', which merely stipulates a 'suitably qualified medical practitioner', i.e. anyone on the GMC Register.

Deaths where the known cause and those considered unnatural are investigated. In most jurisdictions this is done by a "forensic pathologist", coroner, medical examiner, or hybrid medical examiner-coroner offices.

Terminology is not consistent across jurisdictions

In some jurisdictions, the title of "Medical Examiner" is used by a non-physician, elected official involved in medicolegal death investigation. In others, the law requires the medical examiner to be a physician, pathologist, or forensic pathologist.

Similarly, the title "coroner" is applied to both physicians and non-physicians. Historically, coroners were not all physicians (most often serving primarily as the town mortician). However, in some jurisdictions the title of "Coroner" is exclusively used by physicians.

In Canada, there is a mix of coroner and medical examiner systems, depending on the province or territory. In Ontario, coroners are licensed physicians, usually but not exclusively family physicians. In Quebec, there is a mix of medical and non-medical coroners, whereas in British Columbia, there is predominantly a non-physician coroner system. Alberta and Nova Scotia are examples of ME systems [3][4]

Coroners and medical examiners in the United States

In the United States, a coroner is typically an elected public official in a particular geographic jurisdiction who investigates and certifies deaths. The vast majority of coroners lack a Doctor of Medicine degree and the amount of medical training that they have received is highly variable, depending on their profession (e.g. law enforcement, judges, funeral directors, emergency medical technicians, nurses).

In German-speaking Europe, lectures on forensic pathology were regularly held in Freiburg in the mid 18th century and Vienna in 1804. Scientists like Auguste Ambroise Tardieu, Johann Ludwig Casper and Carl Liman made great effort to develop forensic pathology into a science based on empirics.

Forensic pathology was first recognized in the United States by the American Board of Pathology in 1959.[5]

In Canada, it was formally recognized in 2003,[6][7] and a formal training program (a fellowship) is currently being established under the auspices of the Royal College of Physicians and Surgeons of Canada.[8]

In most English speaking countries, forensic pathology is a subspecialty of anatomical pathology. Training requirements differ from country to country.

In India, the speciality is commonly referred to as Forensic Medicine and Toxicology or Legal Medicine. After completion of medical graduation (MBBS), one has to complete three years of study and training including thesis research, which leads to award of degree of MD (Forensic Medicine). One can also alternately pass the board examination conducted by National Board of Examinations, leading to awarding of Diplomate of National Board (DNB).

The majority of the specialists are attached to the Department of Forensic Medicine and Toxicology in various medical colleges. The classification of posts includes Assistant Professor (Lecturer), Associate Professor (Reader) and Professor. The work profile of the specialists includes conducting autopsies and clinical forensic examinations; apart from teaching the medical students. They have to regularly appear in the courts as expert witnesses. A typical department in a government institution conducts 100 to 5000 autopsies a year depending upon the jurisdiction. Apart from this the clinical forensic examinations constitute a major part of the work and number of cases can run up to 10000 a year in an average institution.

In Indonesia, forensic medicine, also known as legal medicine ("kedokteran kehakiman"), is a 3-year specialty program that can be taken directly after completing medical school. It is separate from anatomical pathology and clinical pathology. Upon completion of the program, a forensic medicine specialist will obtain the title Spesialis Forensik, or Sp.F. He or she may be addressed in public as Dokter Forensik ("forensic doctor"). Note that there is no pre-medicine program, making the total duration of formal education for one to become a forensic specialist 8 years.

Forensic medicine is also a mandatory round during medical school clerkship. Medical students assist the doctors on autopsies, and they may also be allowed to perform an autopsy under supervision, and to witness in the court.

In the UK, anatomical pathology is a five-year residency. Successful candidates are eligible for inclusion on the specialist register of the General Medical Council (GMC) having obtained Membership of the Royal College of Pathologists (United Kingdom).

A specialist training (ST) post is applied for after the foundation year to enter a training program in Histopathology. Imminent changes as a result of the Tooke report may require two years or more to be fulfilled on general rotational placements before the option of histopathology arises. However, the Royal College have not yet issued their response to this matter. It is then necessary to obtain the MRCPath Part I examination in Histopathology, after which it is then possible to apply to one of few training posts in Forensic Pathology in the UK. Current approved centres include Belfast, Liverpool, Leicester, Cardiff, London, Sheffield, Glasgow and Dundee. Not all the posts are currently actively training. Following 3 years training in Forensic Pathology and completion of the FRCPath Part II slanted to Forensic Pathology you may then obtain CCT (certificate of completion of training) and work as a Consultant Forensic Pathologist. Another option is to obtain the full FRCPath in general histopathology, followed by another 18–24 months of training in forensic pathology, which will qualify the candidates with either the Diploma of the Royal College of Pathologists in Forensic Pathology (DipRCPath (forensic)), or the Diploma in Medical Jurisprudence (DMJ). In England & Wales you will also need to be Home Office Accredited, which will require checks of your training portfolio and completion of a security check and the Expert Witness Training Course run by the Forensic Science Service.

Foreign graduates and specialists need to apply to the GMC and the RCPath directly to practise Forensic Pathology in the United Kingdom.

In the United States, forensic pathologists typically complete at least one year of additional training (a fellowship) after completing an anatomical pathology residency and having passed the "board" examination administered by The American Board of Pathology or The American Osteopathic Board of Pathology ("board-certified"). Becoming an anatomic pathologist in the United States requires completing a residency in anatomic pathology, which is on-the-job training one must perform upon completing medical school before one may practice unsupervised. Anatomic pathology (as it is called) by itself is a three-year residency. Most U.S. pathologists complete a combined residency in both anatomic and clinical pathology, which requires a total of four years.

In the United States, all told, the education after high school is typically 13–15 years in duration (4 years undergraduate training + 4 years medical school + 4–5 years residency [anatomic and clinical pathology combined] + 1-2 year forensic pathology fellowship). Generally, the biggest hurdle is gaining admission to medical school, although the pass rate for anatomic and forensic pathology board examinations (in the U.S.) is approximately 80-90 and 90-100 percent, respectively. The courts do not require American Board of Pathology certification in order for a witness to be qualified as an expert in the field of forensic pathology, and there are several "diploma mills" that give online certificates in the field.[11]