From Infogalactic: the planetary knowledge core
Jump to: navigation, search
For other uses, see Fourplay (disambiguation). 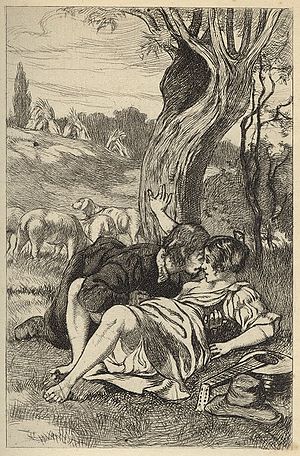 In human sexual behavior, foreplay is a set of emotionally and physically intimate acts between two or more people meant to create sexual arousal and desire for sexual activity. Either or any of the sexual partners may indicate sexual interest to initiate foreplay, and the initiator may not be the active partner during the sexual activity. Foreplay stimulates both partners' sexuality, lowers inhibitions and increases emotional intimacy between partners, and implies a certain level of confidence and trust between the partners. In animal sexual behavior, the loose equivalent is sometimes termed 'precoital activity'.

Sexual desire is an aspect of a person's sexuality, which varies from one person to another. A person who desires sexual activity with another person can provoke sexual arousal in the person. Depending on the type and intensity of the relationship between the two people, the stimuli may involve indicating to the person in some subtle and romantic way that he or she has that desire or by provoking other erotic stimuli. There are many potential stimuli, both physical, and/or mental which can cause a person to become sexually aroused, and which stimuli are invoked will depend on circumstances at a particular time.

On the other hand, there are other things which act as turn-offs, depending on the person's preferences. The response to an indication of sexual interest may be inhibited by issues of sexual morality.

Foreplay can begin with one person indicating in some manner to another person a desire to engage in a sexual activity with that other person. Any act that creates and enhances sexual desire, interest, stimulation or arousal in a sexual partner may constitute foreplay. An indication of sexual desire can be through physical intimacy, such as kissing, touching, embracing or nibbling the partner. Mental engagement can also create sexual interest, such as flirting, talking, whispering or teasing.[1] It may, for example, be a non-physical gesture that indicates sexual availability. Sexual interest can be indicated and created by nudity, such as by one partner stripping, or by wearing sexually suggestive clothing, or by creating a romantic, intimate, or overtly sexual atmosphere. The manual or oral touching of an erogenous zone may indicate sexual interest, as does an intimate kiss on the mouth, breasts, stomach, buttocks, back and inner thighs or other areas of the body. A passionate or French kiss commonly indicates sexual interest,[2] as does any removal of a partner's clothing.

Verbally, foreplay may include compliments, subtle comments with double entendre, and intimate conversations. Non-verbally, foreplay can include provocative clothing, suggestive postures and motions, preening gestures, winking, licking or biting one's lips, standing inside a partner's personal space, and holding a gaze longer than would be expected from only a casual interest.

Sexual role-playing or sex games can create sexual interest.[3] These games can be played in a variety of situations, and have been enhanced by technology. This type of extended foreplay can involve SMS messaging, phone calls, online chat, or other forms of distance communication, which are intended to stimulate fantasizing about the forthcoming encounter. This tantalization builds up sexual tension.

A card or board game can be played for foreplay. The objective of the game is for the partners to indulge their fantasies. The loser can, for example, be required to remove clothing or give the winner a sensual foot massage or any other thing that the winner wants to try. A sensuous atmosphere can also be enhanced by candles, drinks, sensual food or suggestive clothing. Even a suggestion of the use of sex toys or the playing of games involving fetish, sexual bondage or blindfolding is an indication of sexual interest.

Some couples create sexual interest by watching erotic and pornographic videos. Role playing may involve the partners wearing costumes, to create and maintain a sexual fantasy. For variety, the partners can make up a (sexual) story together. One of them starts with a sentence and then the other continues until the story becomes sexually explicit, and it provides an opportunity for the partners to express their sexual fantasies. 'Strangers for a day' is a role playing game which consists of the couple playing roles of the first meeting between them. In a public meeting place, the partners pretend to be strangers meeting for the first time. The objective is for them to flirt and seduce the other, without doing or saying anything that they normally would not do or say at a first meeting.

Tantric foreplay is the first step in the lovemaking session, according to the tantra principles. Tantric sex is against rushing things for the purpose of reaching an orgasm, so tantric foreplay is a way to prepare the body and the mind for the union between the two bodies and the universe. The tantric rules say that foreplay must be focused on the preparation before sexual intercourse. Tantric foreplay may include sensual baths between the two partners in a relaxing atmosphere. Fragrance oil and candles may also be used to set up the mood.[4]

Tantric foreplay is only about giving each other time to connect spiritually and bind. Staring at each other while in a cross-legged position and touching the other's hand palms is a usual foreplay tactic used by tantra practitioners. Tantric foreplay may also include massages. The massage that is applied, according to the tantric philosophy, is not for reaching orgasms but for giving each other pleasure and connecting at a spiritual level.[5]

Foreplay is important from at least two considerations, one of which is purely physiological.[6] On the other hand, foreplay implies a certain level of confidence and trust between the partners and creates intimacy.

Foreplay has important physical and psychological effects on women, but maybe the latter is slightly more important. The biggest issue related to the ability of achieving orgasms is thought to be solved with the right foreplay techniques.[7]

However, the subject of the effectiveness of foreplay continues to be a point of discussion. An example of this is a European survey of 2,300 women in Prague which showed that foreplay is not the key in a satisfactory sexual act. Instead "the duration of intercourse – 16.2 minutes on average – is the clincher".[8]

Foreplay can vary dramatically based on age, religion, and cultural norms. In spite of the clichéd modern folklore that women demand more foreplay and require more time to become physically aroused, recent scientific research refutes that myth. Scientists from McGill University Health Centre in Montreal, Canada used the method of thermal imaging to record baseline temperature change in the genital area as the definition of the time necessary for sexual arousal. Researchers studied the time required for an individual to reach the peak of sexual arousal and concluded that, on average, women and men spend almost the same time for sexual arousal — around 10 minutes.[9] This, however, does not take into account the amount of time necessary to become mentally aroused.