Fort Ancient (33 WA 2)[2] is a collection of Native American earthworks located in Washington Township, Warren County, Ohio, along the eastern shore of the Little Miami River about seven miles (11 km) southeast of Lebanon on State Route 350. The site is the largest prehistoric hilltop enclosure in the United States[3] with three and one-half miles (18,000 ft) of walls in a 100-acre (0.40 km2) complex. Built by the Hopewell peoples, who lived in the area from the 1st century BC to the 6th century AD, the site is situated on a wooded bluff 270 feet (82 m) above the Little Miami. It is the namesake of a culture known as Fort Ancient, who lived near the complex long after it was constructed.

Maintained as a state historical park, the site was designated a National Historic Landmark for its significance. In addition, this is part of the Hopewell Ceremonial Earthworks, one of 14 sites nominated in January 2008 by the U.S. Department of the Interior for potential submission by the United States to the UNESCO World Heritage List.[4]

The Fort Ancient earthworks were built in three stages over an estimated 400-year period. The shoulder blades of deer, split elk antlers, clam shell hoes, and digging sticks were used to loosen the dirt, and baskets holding 35 to 40 pounds were used to carry and distribute it. Archaeologists estimate the total volume of earth in the walls at 553,000 cubic yards (423,000 m3).

The site was visited and surveyed in by John Lock in 1843. In Edwin Hamilton Davis and Ephraim George Squier's Ancient Monuments of the Mississippi Valley, they described Fort Ancient as "one of the most extensive, if not the most extensive, work...in the entire West", regarding its size.[5] Warren K. Moorehead conducted some of the initial excavations at Fort Ancient in 1887 and published his research in 1891 in the book Fort Ancient: Great Prehistoric Warren County Ohio.[6]

1843 Map of the earthworks at Fort Ancient included in Ancient Monuments of the Mississippi Valley.

Scholars originally thought the site was created to provide shelter against enemies, but research has changed their opinion. The site presents anomalies inconsistent with defensive use:

The prevailing scholarly opinion now is that the walls were designed for social and ceremonial purposes related to significant astronomical events. In the Northeast corner of the complex, four circular stone-covered mounds are arranged in a square. They apparently functioned as a calendar; gaps in the walls were aligned to highlight significant seasonal positions of the rising sun and moon.

In 2005 a circular arrangement of posts nearly 60 meters in diameter was discovered. At the center of the ring lies a shallow basin of burned red clay. Now known as the Moorehead Circle, research into its purpose is ongoing.[7]

The State of Ohio purchased the land and made it Ohio's first state park in 1891. It has also been designated a National Historic Landmark.

The site now includes a 9,000-square-foot (840 m2) museum covering 1500 years of American Indian heritage in the Ohio Valley. Topics include North America's earliest people, the development of agriculture, and the impact of Europeans who migrated to the area and came into conflict with its inhabitants. The Museum also contains a classroom, a research area, and a gift shop. The site is open to the public from April through October; group tours are available by appointment on a year-round basis. 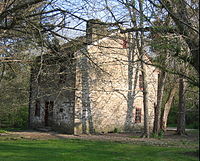 In the 1800s to early 1900s a village existed on the eastern bank of the Little Miami River, at the base of the Fort Ancient Earthworks. The village once had a post office, hotel, blacksmith shop and other businesses and residence. The village no longer exists, but is currently the home of a canoe livery and a private campground.