Forth 2 is a Scottish radio station owned and operated by Bauer Radio.

Forth 2 broadcasts to Edinburgh, The Lothians and Fife and forms part of Bauer's City 2 network of AM stations in Scotland and northern England, carrying networked programming 24 hours a day alongside local news and information. 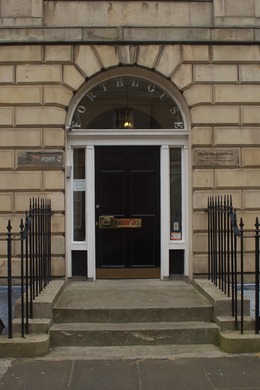 Radio Forth was launched on 22 January 1975 by current chairman Richard Findlay. His opening speech included "This, for the very first time is Radio Forth". Steve Hamilton was the first on-air presenter, hosting the breakfast show.

In 1990, Forth was forced to create a new station on its AM frequency. Before this, Radio Forth was broadcast as a single station on both FM and AM frequencies. The FM station was renamed Radio Forth RFM, with Donny Hughes broadcasting the first Breakfast Show from the newly revamped Studio F in Forth House. The station became known as Forth FM in 1993. The new AM station became "Max AM" which was later renamed Forth AM to match its sister station.

In 2000, both stations were relaunched as 97.3 Forth One and 1548 FORTH2. Many changes occurred at this time including new presenters and a new jingles package. Forth 2 was redesigned as an adult contemporary music station while Forth One continued to play Top 40 songs for the 35s and under.

Radio Forth was owned by Scottish Radio Holdings until 23 June 2005 when British media group EMAP took over. In January 2008, EMAP Radio was sold to Bauer. The radio division was renamed Bauer Radio.

A new programming schedule was introduced on Monday 15 June 2009, consisting mostly of programming simulcast with Bauer's other AM stations in Scotland - Clyde 2 from Glasgow, Northsound 2 from Aberdeen, Tay 2 from Dundee and West Sound AM from Ayr. Forth 2 local programming was then restricted to breakfast shows, news bulletins and some specialist programming although the station also produced networked output on weekday evenings and Sunday mornings.

On 3 June 2013, station owners Bauer Radio announced Forth 2 would axe its remaining local programming with the weekday breakfast show, presented by Bob Malcolm, replaced with a networked show hosted by Robin Galloway from Monday 1 July 2013 across Bauer's network of AM stations in Scotland.[1] The station became part of the Bauer City 2 network on Monday 5 January 2015.

The majority of Forth 2's programming is taken from the Bauer City 2 network, although there are separate Scottish shows at peak times, including weekday breakfast and drive time.[2] The only local programming on the station is live football commentaries on Saturday afternoons, airing under the Game On banner.

Forth 2 produces some of the network's output, while other programming originates from Clyde 2 in Clydebank, Key 2 in Manchester, Metro Radio 2 in Newcastle, Tay 2 in Dundee and Bauer's headquarters at Golden Square, Soho.

Forth 2 broadcasts local news bulletins hourly from 6am to 7pm on weekdays, from 9am to 1pm on Saturdays and from 9am to 12pm on Sundays. Headlines are broadcast on the half hour during weekday breakfast and drivetime shows, alongside sport and traffic bulletins.