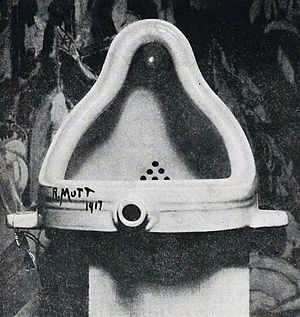 Found object originates from the French objet trouvé, describing art created from undisguised, but often modified, objects or products that are not normally considered art, often because they already have a non-art function.[1] Pablo Picasso first publicly utilized the idea when he pasted a printed image of chair caning onto his painting titled Still Life with Chair Caning (1912). Marcel Duchamp is thought to have perfected the concept several years later when he made a series of ready-mades,[2] consisting of completely unaltered everyday objects selected by Duchamp and designated as art.[3] The most famous example is Fountain (1917), a standard urinal purchased from a hardware store and displayed on a pedestal, resting on its side. In its strictest sense art term "ready-made" is applied exclusively to works produced by Marcel Duchamp, who borrowed the term from the clothing industry while living in New York, and especially to works dating from 1913 to 1921.[4]

Found objects derive their identity as art from the designation placed upon them by the artist and from the social history that comes with the object. This may be indicated by either its anonymous wear and tear (as in collages of Kurt Schwitters) or by its recognizability as a consumer icon (as in the sculptures of Haim Steinbach). The context into which it is placed is also a highly relevant factor. The idea of dignifying commonplace objects in this way was originally a shocking challenge to the accepted distinction between what was considered art as opposed to not art. Although it may now be accepted in the art world as a viable practice, it continues to arouse questioning, as with the Tate Gallery's Turner Prize exhibition of Tracey Emin's My Bed, which consisted literally of her unmade and disheveled bed. In this sense the artist gives the audience time and a stage to contemplate an object. Appreciation of found art in this way can prompt philosophical reflection in the observer.

However, as an art form, found objects tend to include the artist's output—at the very least an idea about it, i.e. the artist's designation of the object as art—which is nearly always reinforced with a title. There is usually some degree of modification of the found object, although not always to the extent that it cannot be recognized, as is the case with ready-mades. Recent critical theory, however, would argue that the mere designation and relocation of any object, ready-mades included, constitutes a modification of the object because it changes our perception of its utility, its lifespan, or its status.

Marcel Duchamp coined the term ready-made in 1915 to describe a common object that had been selected and not materially altered in any way. Duchamp assembled Bicycle Wheel in 1913 by attaching a common front wheel and fork to the seat of a common stool. This was not long after his Nude Descending a Staircase was attracting the attention of critics at the International Exhibition of Modern Art. In 1917, Fountain, a urinal signed with the pseudonym "R. Mutt", and generally attributed to Duchamp, confounded the art world. In the same year, Duchamp indicated in a letter to his sister, Suzanne Duchamp, that a female friend was centrally involved in the conception of this work. As he writes: "One of my female friends who had adopted the pseudonym Richard Mutt sent me a porcelain urinal as a sculpture."[5] Irene Gammel argues that the piece is more in line with the scatological aesthetics of Duchamp's friend, the Baroness Elsa von Freytag-Loringhoven, than Duchamp's.[6]

Research by Rhonda Roland Shearer indicates that Duchamp may have fabricated his found objects. Exhaustive research of mundane items like snow shovels and bottle racks in use at the time failed to reveal identical matches. The urinal, upon close inspection, is non-functional. However, there are accounts of Walter Arensberg and Joseph Stella being with Duchamp when he purchased the original Fountain at J. L. Mott Iron Works.[7] 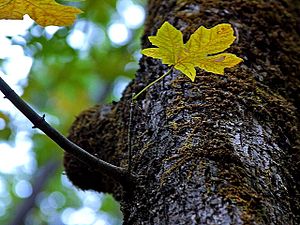 An Oak Tree by Michael Craig-Martin; 1973

The use of found objects was quickly taken up by the Dada movement, being used by Man Ray and Francis Picabia who combined it with traditional art by sticking combs onto a painting to represent hair. [1] A well-known work by Man Ray is Gift (1921), [2] which is an iron with nails sticking out from its flat underside, thus rendering it useless.

The combination of several found objects is a type of ready-made sometimes known as an assemblage. Another such example is Marcel Duchamp's Why Not Sneeze, Rose Sélavy?, consisting of a small birdcage containing a thermometer, cuttlebone, and 151 marble cubes resembling sugar cubes.

In the 1960s found objects were present in both the Fluxus movement and in Pop art. Joseph Beuys exhibited modified found objects, such as rocks with a hole in them stuffed with fur and fat, a van with sledges trailing behind it, and a rusty girder.

In 1973 Michael Craig-Martin claimed of his work An Oak Tree, "It's not a symbol. I have changed the physical substance of the glass of water into that of an oak tree. I didn't change its appearance. The actual oak tree is physically present, but in the form of a glass of water."[8]

In the 1980s, a variation of found art emerged called commodity sculpture where commercially mass-produced items would be arranged in the art gallery as sculpture. The focus of this variety of sculpture was on the marketing, display of products. These artists included Jeff Koons, Haim Steinbach, and Ashley Bickerton (who later moved on to do other kinds of work).

One of Jeff Koons' early signature works was Two Ball 50/50 Tank, 1985, which consisted of two basketballs floating in water, which half-fills a glass tank (an influence on Damien Hirst).[citation needed] 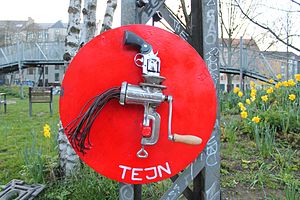 Gun getting shredded in mincer in troubled neighbourhood. Danish artist TEJN welds discarded iron, found in urban areas. The materials are later "given back to the street" as commenting sculpture installations

A specific subgenre of found art is known as trash art or junk art.[9] These works primarily comprise components that have been discarded. Often they come quite literally from the trash. One example of trash art is Trashion, basically using trash to create fashion. Many organizations sponsor junk art competitions. Trash art may also have a social purpose, of raising awareness of trash.[10]

Creating and using trash art can expose people to hazardous substances. For instance, older computer and electronic components can contain lead (in solder and insulation). Jewelry made from these items may require careful handling. In France, trash art became known as "Poubellisme", art made from contents of "poubelles" (trash bins). Spanish artist Francisco de Pajaro ("Art is trash" or "Arte es basura")[this quote needs a citation] established in London is doing art with rubbish.

The found object in art has been a subject of polarised debate in Britain throughout the 1990s due to the use of it by the Young British Artists. It has been rejected by the general public and journalists, and supported by public museums and art critics. In his 2000 Dimbleby lecture, Who's afraid of modern art, Sir Nicholas Serota advocated such kinds of "difficult" art, while quoting opposition such as the Daily Mail headline "For 1,000 years art has been one of our great civilising forces. Today, pickled sheep and soiled beds threaten to make barbarians of us all". A more unexpected rejection in 1999 came from artists—some of whom had previously worked with found objects—who founded the Stuckists group and issued a manifesto denouncing such work in favour of a return to painting with the statement "Ready-made art is a polemic of materialism".[11]

Many modern artists are notable for their use of found objects in their art. These include the following: