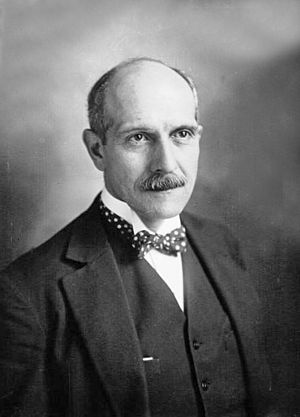 François Piétri (8 August 1882 – 17 August 1966) was a minister in several governments in the later years of the French Third Republic and was French ambassador to Spain from 1940 to 1944 under the Vichy regime.

Born in Bastia, Corsica to Antoine-Jourdan Piétri, a lawyer and préfecture councilman, and Clorinde Gavini, the daughter of a French National Assembly member.[1] Piétri graduated from the elite Collège Stanislas in 1899 and moved on to the École libre des sciences politiques for his university education. He was selected for the French Civil Service in 1906 as an auditor (Inspecteur des finances) and progressed through the ranks to the post of Directeur général des finances du Maroc - Director of Finances for Morocco - a role he filled from 1917 to 1924.

In 1924, Piétri was elected to the National Assembly and remained in office there until 1942. During that time, he occupied a number of responsibilities, including:

He remained involved in French politics during the Nazi occupation of France, becoming the Vichy ambassador to Spain from 1940 to 1944.

François Piétri died in 1966 in Ajaccio.