Freddy Quinn (born Franz Eugen Helmut Manfred Nidl, 27 September 1931, Niederfladnitz, Austria) is an Austrian singer and actor whose popularity within the German-speaking world soared in the late 1950s and 1960s. Similar to Hans Albers two generations before him, Quinn adopted the persona of the rootless wanderer who goes to sea but longs for a home, family and friends. Quinn's Irish family name comes from his Irish born salesman father, Johann Quinn. His mother, Edith Henriette Nidl, was an Austrian journalist. He is often associated with the Schlager scene.

Quinn was born in Lower Austria and grew up in Vienna. As a child he lived in Morgantown, West Virginia (USA) with his father, but moved back to live with his mother in Vienna. Through his mother's second marriage to Rudolf Anatol Freiherr von Petz, Quinn adopted the name Nidl-Petz. At the end of World War II, as part of a refugee group, Freddy encountered American troops in Bohemia. Due to his fluent English, the 14-year-old succeeded in pretending to be of American nationality. He was subsequently sent to the US in May 1945 with a military transport. On Ellis Island, he learned that his father had already died in 1943 in a car accident. The boy was immediately sent back to Europe and, before returning to his mother in Vienna, was stranded for a whole year in Antwerp in a children's home, where he learned to speak French and Dutch. However, having left the landlocked country of Austria in favor of adventurous journeys through Southern Europe and Northern Africa, he eventually headed for Germany. He was "discovered" in St. Pauli, Hamburg, and was offered his first recording contract in 1954.[1] He represented Germany at the Eurovision Song Contest 1956 in Lugano, Switzerland with the atypical song, "So geht das jede Nacht", about an unfaithful girlfriend who dates many men and he finished in third place. Most of his other songs are about Hamburg, the endless sea and the solitary life in faraway lands. His first hit record was "Heimweh" ("Homesickness", a.k.a. "Brennend heißer Wüstensand", "Dort wo die Blumen blüh'n" and "Schön war die Zeit", (1956), a German version of Dean Martin's "Memories Are Made of This". It sold over one million copies, and was awarded a gold disc.[2]

His popularity waned in the 1970s, but Quinn continued performing. "Junge, komm bald wieder" was sung by Alpay on 7 Dilde Alpay ("In Seven Languages Alpay" in Turkish) album, which was released in 1973. 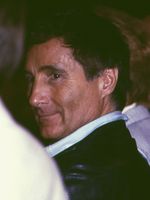 Starting in the late 1950s, Quinn also acted in several movies, again frequently cast as the seafaring loner. Titles include Freddy, the Guitar and the Sea (1959), Freddy unter fremden Sternen (1959), Freddy and the Song of the South Pacific (1962), and Homesick for St. Pauli (1963). Subsequently, Quinn also performed on the stage in such diverse roles as Prince Orlofsky in Die Fledermaus, the king in The King and I, and Lord Fancourt Babberly in Charley's Aunt.

Quinn was also an accomplished circus performer who stunned television audiences as a tightrope walker, performing live and without a safety net. On another occasion, which was also televised, he rode a lion inside a circus cage while the lion was balancing atop a moving surface.