His early life was devoted to the trade of a carpenter, and he acquired skill as a draftsman. When twenty years old he was employed by B. H. Latrobe as his assistant engineer in erecting the first water works in Philadelphia, located in Centre Square. On 1 April 1805, he was elected superintendent and engineer of the works, but they were found to be wholly inadequate after several years of trial.[1]

In 1811 Graff recommended Fairmount as the proper place for the water works, and was entrusted with their construction. At this time, the pipes were made of wood, but Graff devised an iron-pipe system to be used instead. He brought the work to perfection, and patterns of his fire plugs and stopcocks were sent to England. In 1822, when the basic system was complete,[2] the city water committee sent him a resolution of thanks, and he was presented with a silver vase. His experience and ability became acknowledged throughout the country, and he supplied detailed information to about 37 corporations in the United States, including New York City and Boston.[1] 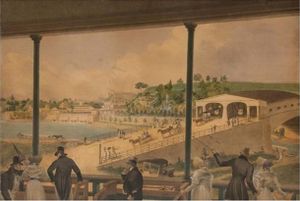 John Rubens Smith, A View of Fairmount and the Water-Works, 1837

By 1842, over 113 miles of water mains had been laid.[2] He was engaged for 42 years in the service of the city of Philadelphia, and a monument to his memory was erected on the grounds of the Fairmount Water Works. In 1828 he received another from the water committee “as a testimonial of respect for his talents and zeal effectually displayed in overcoming unforeseen difficulties encountered in the construction of the northeast reservoir at Fairmount".[1]

At his death, his son, Frederic Graff, Jr. took his place.[2]