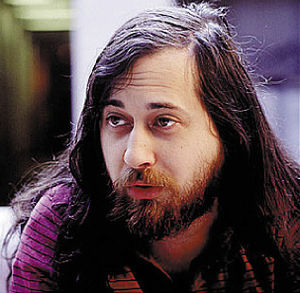 Richard Stallman, founder of the GNU Project and the free software movement, in or before 2002

The free software movement (FSM) or free and open-source software movement (FOSSM) is a social movement[1] with the goal of obtaining and guaranteeing certain freedoms for software users, namely the freedom to run the software, to study and change the software, and to redistribute copies with or without changes. Although drawing on traditions and philosophies among members of the 1970s hacker culture and academia, Richard Stallman formally founded the movement in 1983 by launching the GNU Project.[2]

Stallman founded the Free Software Foundation in 1985 to support the movement.

The philosophy of the movement is that the use of computers should not lead to people being prevented from cooperating with each other. In practice, this means rejecting "proprietary software", which imposes such restrictions, and promoting free software,[3] with the ultimate goal of liberating everyone in cyberspace[4] – that is, every computer user. Stallman notes that this action will promote rather than hinder the progression of technology, since "it means that much wasteful duplication of system programming effort will be avoided. This effort can go instead into advancing the state of the art".[5]

Members of the free-software movement believe that all users of software should have the freedoms listed in The Free Software Definition. Many of them hold that it is immoral to prohibit or prevent people from exercising these freedoms and that these freedoms are required to create a decent society where software users can help each other, and to have control over their computers.[6]

"While social change may occur as an unintended by-product of technological change, advocates of new technologies often have promoted them as instruments of positive social change." This quote by San Jose State professor Joel West explains much of the philosophy, or the reason that the free source movement is alive. If it is assumed that social change is not only affected, but in some points of view, directed by the advancement of technology, is it ethical to hold these technologies from certain people? If not to make a direct change, this movement is in place to raise awareness about the effects that take place because of the physical things around us. A computer, for instance, allows us so many more freedoms than we have without a computer, but should these technological mediums be implied freedoms, or selective privileges? The debate over the morality of both sides to the free software movement is a difficult topic to compromise respective opposition.[8]

The Free Software Foundation also believes all software needs free documentation, in particular because conscientious programmers should be able to update manuals to reflect modification that they made to the software, but deems the freedom to modify less important for other types of written works.[9] Within the free software movement, the FLOSS Manuals foundation specialises on the goal of providing such documentation. Members of the free software movement advocate that works which serve a practical purpose should also be free.[10] 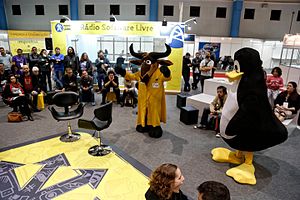 GNU and Tux mascots around free software supporters at FISL 16

Some supporters of the free-software movement take up public speaking, or host a stall at software-related conferences to raise awareness of software freedom. This is seen as important since people who receive free software, but who are not aware that it is free software, will later accept a non-free replacement or will add software that is not free software.[12]

Margaret S. Elliot, a researcher in the Institute for Software at the University of California Irvine, not only outlines many benefits that could come from a free software movement, she claims that it is inherently necessary to give every person equal opportunity to utilize the Internet, assuming that the computer is globally accessible. Since the world has become more based in the framework of technology and its advancement, creating a selective internet that allows only some to surf the web freely is nonsensical according to Elliot. If there is a desire to live in a more coexistent world that is benefited by communication and global assistance, then globally free software should be a position to strive for, according to many scholars who promote awareness about the free software movement. The ideas sparked by the GNU associates are an attempt to promote a "cooperative environment" that understands the benefits of having a local community and a global community.[13]

A lot of lobbying work has been done against software patents and expansions of copyright law. Other lobbying focusses directly on use of free software by government agencies and government-funded projects.

Congressmen Edgar David Villanueva and Jacques Rodrich Ackerman have been instrumental in introducing in Republic of Peru bill 1609 on "Free Software in Public Administration".[15] The incident immediately invited the attention of Microsoft Inc, Peru, whose General Manager wrote a letter to Dr Edgar David Villanueva. Dr Villanueva's response received worldwide attention and is still seen as a classical piece of argumentation favouring use of free software in Governments.[16]

In the USA, there have been efforts to pass legislation at the state level encouraging use of free software by state government agencies.[17]

Like many social movements, the free software movement has ongoing internal conflict between personalities and between supporters of compromise versus strict adherence to values.

Even though commercial free software wasn't uncommon at the time, in 1998 after an announcement that Netscape would liberate their popular Web browser, a strategy session was held to develop a stronger business case for free software which would focus on technology rather than politics.[18] After this Eric Raymond and Bruce Perens founded the Open Source Initiative (OSI), to promote the term "open-source software" as an alternative term for free software. OSI wanted to address the perceived shortcomings in terminology, and also some members of OSI did not agree with the free software movement's position that non-free software is a social problem or that it is unethical, arguing instead that open-source is just a superior model for software development.[19] The latter became the view of people like Eric Raymond and Linus Torvalds, while Bruce Perens argues that open source was simply meant to popularize free software under a new brand, and even called to come back to the basic ethical principles.[20]

On the other hand, the free-software movement views free software as a moral imperative: that proprietary software should be rejected for selfish and social reasons, and that only free software should be developed and taught to cope with the task of making computing technology beneficial to humanity. It is argued that whatever economical or technical merits free software may have are consequences stemming from the rights that free software developers and users enjoy. An example of this is empowerment resulting in the unlikelihood of free software being designed to mistreat or spy on users. At the same time, the benefits purveyed by the open-source movement have been challenged both from inside and outside the free software movement. It is unclear whether free and open-source software actually leads to more performant and less vulnerable code, with researchers Robert Glass and Benjamin Mako Hill providing statistical insight that this is usually not the case.[21] [22]

Regarding the meaning and misunderstandings of the word free, those who work within the free-software camp have searched for less ambiguous terms and analogies like "free beer vs free speech" in efforts to refine their definition so there is no confusion concerning free software profitability. The loan adjective libre has gained some traction in the English-speaking free software movement as unequivocally conveying the state of being in freedom that free software refers to, although it is used in an explanatory or alternative fashion and is not considered schismatic. In fact, free software has always been referred to using the word libre and its translations in languages with such words. The free software movement replies that while free is prone to confuse the novice because of its two intuitive meanings at least one of them is the right one, and it is hard to get it wrong once the difference has been learned. It is ironically noted that open-source also leads to a misunderstanding in which people think source code disclosure is enough to meet the open-source criteria.[10] In India, where the free software movement has gained a lot of ground and the government having adopted a policy[23] in this regard, the term swatantra[24] and its variants are widely used as a replacement of the term 'free'.

The switch from the free-software movement to the open-source movement has had negative effects on the progression of community, according to Christopher Kelty who dedicates a scholarly chapter to the free-software movements in "Theorizing Media and Practice". The open-source movement denies that selectivity and the privatization of software is unethical. Although the open-source movement is working towards the same social benefits as the free software movement, Kelty claims that by disregarding this fundamental belief of the free-software advocates, one is destroying the overall argument. If it can be claimed that it is ethical to limit the internet and other technology to only users who have the means to use this software, then there is no argument against the way things are at the moment; there is no need to complain if all morality is in effect.[25]

Although the movements have separate values and goals, people in both the open-source community and free-software community collaborate when it comes to practical projects.[26] By 2005, Richard Glass considered the differences to be a "serious fracture" but "vitally important to those on both sides of the fracture" and "of little importance to anyone else studying the movement from a software engineering perspective" since they have had "little effect on the field".[27]

The two most prominent people associated with the movement, Richard Stallman and Linus Torvalds, may be seen as representatives of the value based versus apolitical philosophies, as well as the GNU versus Linux coding styles. Paradoxically as it seems, it is the symbiosis of their works that make up a complete operating system known as GNU/Linux, or just Linux. In the GNU/Linux naming controversy the FSF argues for the term GNU/Linux because GNU was a longstanding project to develop a free operating system, of which they say the kernel was the last missing piece.[28]

Ohloh, a web service founded in 2004 and launched in 2006, monitors the development activity in the free-software community, providing detailed metrics and quantitative analyses on the growth and popularity of projects and programming languages.

Should principles be compromised?

Richard Stallman, on the other hand, sees the current level of compromise as a greater cause for worry.[30][31]

How will programmers get paid?

Stallman said that this is where people get the misconception of "free": there is no wrong in programmers' requesting payment for a proposed project. Restricting and controlling the user's decisions on use is the actual violation of freedom. Stallman defends that in some cases, monetary incentive is not necessary for motivation since the pleasure in expressing creativity is a reward in itself.[5]

The free software movement champions copyleft licensing schema (often pejoratively called "viral licenses"). In its strongest form, copyleft mandates that any works derived from copyleft-licensed software must also carry a copyleft license, so the license spreads from work to work like a computer virus might spread from machine to machine. These licensing terms can only be enforced through asserting copyrights.[32] Critics of copyleft licensing challenge the idea that restricting modifications is in line with the free software movement's emphasis on various "freedoms," especially when alternatives like MIT, BSD, and Apache licenses are more permissive.[33][34] Proponents enjoy the assurance that copylefted work cannot usually be incorporated into non-free software projects.[35] They emphasize that copyleft licenses may not attach for all uses and that in any case, developers can simply choose not to use copyleft-licensed software.[36][37]