From Infogalactic: the planetary knowledge core
Jump to: navigation, search
File:Frere hall Karachi.jpg
Frere Hall - a beautiful structure built during the days of the British Raj

Frere Hall is one of the many remnant buildings of the British colonial era that still exist in Karachi, Sindh, Pakistan.

It was built in honour of Sir Henry Bartle Edward Frere, who was known for promoting economic development and making Sindhi as the only official language.

As of 2011, Frere hall is open to the public again. On Sundays there is a book bazaar in the courtyards where it is possible to purchase some old out-of-print books amongst others.[1]

The Hall is located between Abdullah Haroon Road (formerly Victoria Road) and Fatima Jinnah Road (formerly Bonus Road) in the middle of two lawns which extended till the roads. It is located in Civil Lines locality of the town. In the vicinity are the Marriott Hotel, US Consulate General house, the Japanese Consulate and the Sind Club. 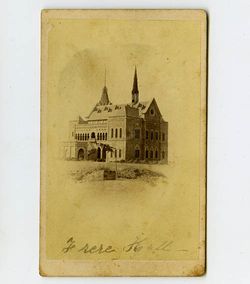 Out of twelve designs submitted, the one by Lt. Col St. Clair Wilson was chosen and construction started in 1863.[2] It was opened by Samuel Mansfield, the Commissioner of Sind in 1865.[2]

The total cost of this hall was about Rs. 180,000 out of which the Government contributed Rs. 10,000 while the rest was paid for by the municipality.[2]

Built in the Venetian Gothic style with yellowish Karachi limestone and red and grey sandstones from Jungshahi.[2]

It was used as a Town Hall during the Raj. During the same period it housed a number of busts including King Edward VII's which was a gift from Seth Edulji Dinshaw.[2] It also housed oil paintings of former Commissioners in Sind including Sir Charles Pritchard and Sir Evan James.

In 1877 at Karachi in (British) India, where the first attempt was made to form a set of rules of badminton.[3]

After a terrorist attack attempt on the US Consulate, which faces Frere Hall, the park was declared off-limits to the general public for a few years until 2011. As of Spring 2011 the park was opened for the public again as the US consulate was relocated.[4]

Around the Hall were two lawns originally known as 'Queen's Lawn' and 'King's Lawn.'[2] These were renamed as Bagh-e-Jinnah (Jinnah Garden) after independence.