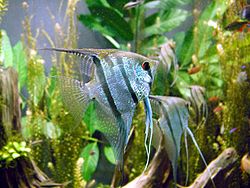 Freshwater ecosystems are a subset of Earth's aquatic ecosystems. They include lakes and ponds, rivers, streams, springs, and wetlands. They can be contrasted with marine ecosystems, which have a larger salt content. Freshwater habitats can be classified by different factors, including temperature, light penetration, and vegetation.

Limnology (and its branch freshwater biology) is a study about freshwater ecosystems. It is a part of hydrobiology.

Original efforts to understand and monitor freshwater ecosystems were spurred on by threats to human health (ex. Cholera outbreaks due to sewage contamination). Early monitoring focussed on chemical indicators, then bacteria, and finally algae, fungi and protozoa. A new type of monitoring involves differing groups of organisms (macroinvertebrates, macrophytes and fish) and the stream conditions associated with them.

Current biomonitoring techniques focus mainly on community structure or biochemical oxygen demand. Responses are measured by behavioural changes, altered rates of growth, reproduction or mortality. Macroinvertebrates are most often used in these models because of well known taxonomy, ease of collection, sensitivity to a range of stressors, and their overall value to the ecosystem. Most of these measurements are difficult to extrapolate on a large scale, however.

The use of reference sites is common when assessing what a healthy freshwater ecosystem should “look like”. Reference sites are easier to reconstruct in standing water than moving water. Preserved indicators such as diatom valves, macrophyte pollen, insect chitin and fish scales can be used to establish a reference ecosystem representative of a time before large scale human disturbance.

Over 123 freshwater fauna species have gone extinct in North America since 1900. Of North American freshwater species, an estimated 48.5% of mussels, 22.8% of gastropods, 32.7% of crayfishes, 25.9% of amphibians, and 21.3% of fishes are either endangered or threatened. Extinction rates of many species may increase severely into the next century because of invasive species, loss of keystone species, and species which are already functionally extinct. Projected extinction rates for freshwater animals are around five times greater than for land animals, and are comparable to the rates for rainforest communities. Recent extinction trends can be attributed largely to sedimentation, stream fragmentation, chemical and organic pollutants, dams, and invasive species.