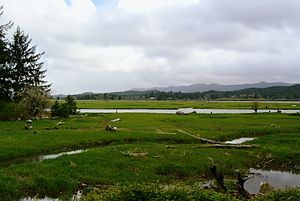 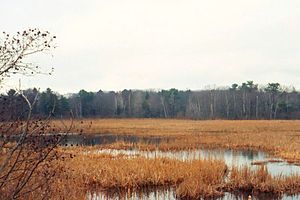 A freshwater marsh is a marsh that contains fresh water. Freshwater marshes are usually found near the mouths of rivers and are present in areas with low drainage.[1] It is the counterpart to the salt marsh, an upper coastal intertidal zone of bio-habitat which is regularly flushed with sea water.

Freshwater marshes are non-tidal biomes containing little or no peat (unlike bogs and fens, both a kind of mire and mires consisting heavily of moist, biologically active peat). They are most common in the Gulf Coast region, specifically in Florida. They can be one of two principal types: either fresh water mineralized marshes, which derive their water from groundwater, streams and surface runoff; or poorly mineralized fresh water marshes whose moisture comes mostly from regular direct precipitation. Freshwater marshes support an independent pH-neutral ecosystem which encourages biodiversity. Common species include ducks, geese, swans, songbirds, swallows, coots, and black ducks. Although shallow marshes do not tend to support many fish, deeper ones are home to many species, including such large fish as the northern pike and carp. Some of the most common plants in these areas are cattails, water lilies, arrowheads, and rushes.[2]

The Florida Everglades represent the largest contiguous freshwater marsh in the entire world.[3] This immense marsh covers 4,200 square miles (11,000 km2) and is located in the southern tip of Florida. Continued human development, including drainage for development and polluted agriculture runoff, as well as alterations in the water cycle threaten the existence of the Everglades. The remaining parts of the Everglades are grasses, sedges and other emergent hydrophytes.[4]