Fritz Hermann Michael Bayerlein (14 January 1899 – 30 January 1970) was an officer in the German Army during the Second World War. He served as the operations officer for a number of significant units, most prominently with Erwin Rommel in the Afrika Korps. On his return to Europe he was made divisional commander for the 3rd Panzer Division, and later the Panzer Lehr Division. In the closing stages of the war he commanded the LIII Army Corps. He was a recipient of the Knight's Cross of the Iron Cross with Oak Leaves and Swords (German: Ritterkreuz des Eisernen Kreuzes mit Eichenlaub und Schwertern). The Knight's Cross of the Iron Cross and its higher grade Oak Leaves and Swords was awarded to recognise extreme battlefield bravery or successful military leadership.

Fritz Bayerlein was born in Würzburg, Franconia, Germany. During the First World War, Bayerlein joined the 9th Bavarian Infantry in 1917 and fought on the Western Front. He was wounded and received the Iron Cross 2nd Class when he was in the 4th infantry regiment. After the war Bayerlein was briefly a member of a volunteer battalion but was transferred to Regiment 45 in May 1919. He was made a member of the Reichswehr as a cadet sergeant. He went through officer training in 1921 and was promoted to lieutenant in 1922. He held several commands over the interwar years. In 1938 he was sent to the Military Academy. He was promoted to Major and was appointed the second staff officer for the 3rd Panzer Division, responsible for the division supply. In 1939 he was made chief of staff of the 10th Panzer Division, with which he served during the Polish and French campaigns.

At the beginning of the Second World War, Bayerlein served in the Invasion of Poland as the First General Staff Officer of General Heinz Guderian. He continued in this position during the invasion of France. Guderian's troops crossed the Meuse River near Sedan on May 14 and advanced until General Paul Ludwig Ewald von Kleist ordered Guderian to halt and not attack the British fleeing from Dunkirk.

In Operation Barbarossa, the invasion of the Soviet Union, during June 1941, Bayerlein was assigned to General Guderian's Panzer Group 2, Headquarters, as the Ia Operations officer. (page 50, "Bayerlein, from Afrikakorps to Panzer Lehr"). After the Kiev operation, Oberstleutnant Bayerlein was transferred from the Russian front and from the support of General Guderian to Generaloberst Erwin Rommel. He was transferred to the Führerreserve in August 1942, then reassigned to the Afrika Korps as Chief of Staff. He served under the command of Generalmajor Walter Nehring beginning in March 1942 upon Nehring's transfer to Africa. 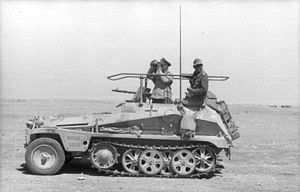 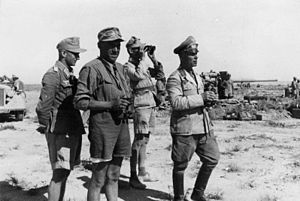 Bayerlein with Rommel at El Alamein. 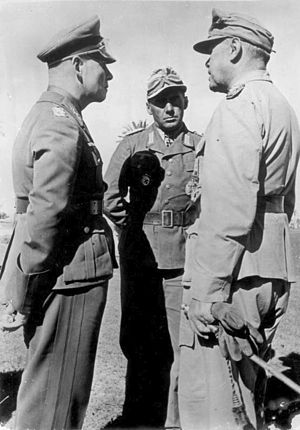 Bayerlein's next assignment was in North Africa, where he served as a staff officer for the Afrika Korps. On 30 August 1942 during the battle of Alam Halfa Bayerlein was forced to take command of the Afrika Korps when General Walther Nehring was wounded. Later he served under Erwin Rommel and Wilhelm von Thoma. He again assumed command when British troops captured von Thoma at El Alamein on 4 November. When Rommel left Tunisia in March 1943, after the failed attack at Medenine (Operation Capri), Bayerlein was appointed German liaison officer under the new commander, Italian Giovanni Messe. In actual practice, Bayerlein acted with a fair degree of autonomy, at times disregarding the orders of his Italian superior.[citation needed] During his time in Africa Bayerlein developed muscular rheumatism and hepatitis. He was sent to Italy on sick leave before the German troops in Tunisia surrendered on 12 May 1943.

Bayerlein was sent to the Eastern Front in October 1943, his second assignment to Russia, to lead the 3rd Panzer Division. The division became surrounded at Kirovograd. Bayerlein led a break out through the Soviet encirclement against Hitler's orders. Following this he was reassigned to command the Panzer Lehr Division. They moved to Budapest, Hungary to train in March 1944.

The Panzer Lehr Division was a unit built around the tank instructors pulled from Germany's tank schools, and had a reputation as the most experienced Panzer division of the Wehrmacht. Bayerlein had a reputation for promptness and efficiency.[citation needed] The Panzer Lehr Division moved up from LeMans to Normandy on June 7, and took a brutal pounding from Allied aircraft in the transit. The division suffered particularly in the loss of trucks and transport vehicles.[1] During the fighting in the heavy forested bocage country of Normandy, Bayerlein had great difficulty getting from one point to the next, with his staff cars being shot up. Twice his driver was killed. He took to getting about upon a motorcycle to spare any further losses to his staff. During the allied break out attempt at Operation Cobra, allied carpet bombing near the French village of Saint-Lô decimated the division. Bayerlein and the division staff officers had to take cover in the woods from the bombing. The remnants of Panzer Lehr Division slipped out of the Falaise pocket and moved east toward Vire in August 1944.[citation needed]

An effort was made to refit the division and bring it back up to strength prior to the German winter offensive in the west, "Wacht am Rhein" - the Ardennes Offensive. Bayerlein served under General Heinrich von Lüttwitz (XLVII Panzer Corps commander) and General Hasso von Manteuffel (commander of 5th Panzer Army) for the Ardennes Offensive which began on 16 December 1944. Under Bayerlein's command, Panzer Lehr surrounded and laid siege to Bastogne. Later Panzer Lehr also attempted to rescue the 2nd Panzer Division which besieged at Celles, but was unable to do so due to Allied air power and resistance from the US VII Corps.[citation needed]

Following the Ardennes Offensive, Bayerlein was relieved of his command and was placed on the Fuhrerreserve. Later, Bayerlein took command of the 53rd corps (LIII Armee Korps - Korpsgruppe Bayerlein) in February 1945. On 15 April 1945 General Bayerlein ordered his troops to surrender to the U.S. Army 7th Armoured Division in the Ruhr Pocket. Bayerlein refused to comply with Hitler's scorched earth policy in the industrialised Ruhr valley.[citation needed] Bayerlein knew the war was lost, and had been since Africa. He arrested members of his staff who dissented with his plans to surrender the corps, and praised those that helped him. The surrender of the LIII Armee Korps in the Ruhr was the first large surrender of over 30,000 troops. This triggered the entire front to collapse and ended the fighting. Bayerlein surrendered to General Robert Hasbrouck, commanding general of the 7th Armored Division, on 19 April 1945. (ref: "Bayerlein")

Bayerlein was a prisoner of war from April 1945 through April 1947. During this time, with many other generals in Allied captivity, they wrote the European battle histories for the US Army Historical Division. Bayerlein cooperated with the Army historians. This, along with his surrender in the Ruhr, garnered him hostile threats from many of his fellow officers. (ref: "Bayerlein")

Bayerlein was released from captivity on 2 April 1947. After the war he wrote about military subjects and continued aiding the US Army Historical Division's efforts in documenting in the historical studies of World War II, European Theatre. During the 1960s, he was also a technical advisor to the Carl Foreman production of The Guns of Navarone. He died in his hometown Würzburg in 1970 from his illness in Africa. (ref: "Bayerlein")