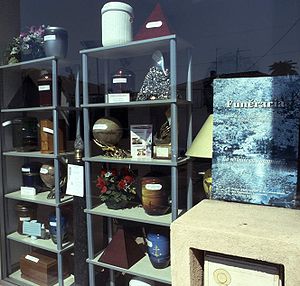 Showcase of an urn shop in Nice, France 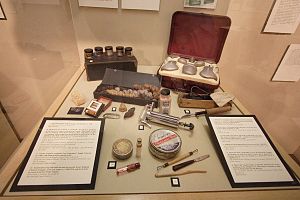 A funeral director, also known as a mortician or undertaker, is a professional involved in the business of funeral rites. These tasks often entail the embalming and burial or cremation of the dead, as well as the planning and arrangement of the actual funeral ceremony. Funeral directors may at times be asked to perform tasks such as dressing (in garments usually suitable for daily wear), casketing (placing the human body in the container), and cossetting (applying any sort of cosmetic or substance to the viewable areas of the person for the purpose of enhancing appearances).

The term mortician is derived from the Latin word mort- (“death”) + -ician. In 1895, the trade magazine The Embalmers' Monthly put out a call for a new name for the profession to distance itself from the title undertaker, a term that was then perceived to have been tarnished by its association with death. The term Mortician was the winning entry.[1] [2]

As the societal need to account for the dead and their survivors is as ancient as civilization itself, death care is among the world's oldest professions. Ancient Egypt is a probable pioneer in supporting full-time morticians; intentional mummification began c. 2600 BC, with the best-preserved mummies dating to c. 1570 to 1075 BC. Specialized priests spent 70 full days on a single corpse. Only royalty, nobility and wealthy commoners could afford the service, considered an essential part of accessing eternal life.[3]

Across successive cultures, religion remained a prime motive for securing a body against decay and/or arranging burial in a planned manner; some considered the fate of departed souls to be fixed and unchangeable (e.g., ancient Mesopotamia) and considered care for a grave to be more important than the actual burial.[4]

In Ancient Rome, wealthy individuals trusted family to care for their corpse, but funeral rites would feature professional mourners: most often actresses who would announce the presence of the funeral procession by wailing loudly. Other paid actors would don the masks of ancestors and recreate their personalities, dramatizing the exploits of their departed scion. These purely ceremonial undertakers of the day nonetheless had great religious and societal impact; a larger number of actors indicated greater power and wealth for the deceased and their family.[5]

Modern ideas about proper preservation of the dead for the benefit of the living arose in the European Age of Enlightenment. Dutch scientist Frederik Ruysch's work attracted the attention of royalty and legitimized postmortem anatomy.[6] Most importantly, Ruysch developed injected substances and waxes that could penetrate the smallest vessels of the body and seal them against decay.[5]

Role in the United States

In the U.S., most modern day funeral homes are run as family businesses.[citation needed] The majority of morticians work in small, independent family run funeral homes. The owner usually hires two or three other morticians to help them. Often, this hired help is in the family, perpetuating the family's ownership. Other firms that were family-owned have been acquired and are operated by large corporations such as Service Corporation International, though such homes usually trade under their pre-acquisition names.[citation needed]

Most funeral homes have one or more viewing rooms, a preparation room for embalming, a chapel, and a casket selection room. They usually have a hearse for transportation of bodies, a flower car, and limousines. They also normally sell caskets and urns.[7]

Organizations and licensing in the United States

In the United States, the individual states each have their own licensing regulations for funeral directors. Most require a combination of post-secondary education (typically an associate's degree), passage of a National Board Examination,[8] passage of a state board examination, and one to two years' work as an apprentice.[9]

Mortuary science graduates may have to relocate to find jobs.[7]