Under Prien's command, the submarine U-47 sank over 30 Allied ships totaling about 200,000 gross register tons (GRT). His most famous exploit was the sinking of the British battleship HMS Royal Oak at anchor in the Home Fleet's anchorage in Scapa Flow.

Prien was one of three children of a judge. Born in Osterfeld, Prussian Province of Saxony (Germany) and after his parents divorced raised in Leipzig, Prien joined the Handelsmarine (German Merchant Navy) in mid-1923, studying for three months at the Seaman's College in Finkenwerder in Hamburg, before going to sea as a cabin boy on the full rigged three-master Hamburg. His first voyage touched at the Azores, Pensacola, Hobart (Tasmania) and Falmouth. While sailing to Cork in October 1925, the ship was caught in a storm and ran aground near Dublin. The vessel was abandoned and later declared a wreck. Prien and the crew were taken to Bremerhaven and then Hamburg, where Prien was given his papers as seaman and found the cost of items he had drawn on board exceeded his six months wages.

Aiming for his master's certificate, Prien quickly signed on the Oldenburg (now the Suomen Joutsen), which was another full rigger (as noted in Jost Metzler's book The Laughing Cow': The Story of U69[2]). While still an ordinary seaman aboard the Oldenburg, Prien took Metzler, who later commanded U-69, under his wing. Metzler relates at the beginning of The Laughing Cow how his relationship with Prien was "very strained" at first, and how Prien, as a young seaman, "could on occasion be very hard and unjust." Later they became good friends.

After several years of work and study as a seaman, Prien took and passed the required examinations, obtaining his mate's license and a wireless operator's certificate. He signed on for his first berth as an officer, becoming the Fourth Officer on the passenger liner San Francisco out of Hamburg. He had no sooner assumed his responsibilities when the ship collided with another vessel, Karlsruhe, in a dense fog in the ship channel near the Hoheweg lighthouse. Prien, who had gone forward at the time to supervise preparations to drop anchor as a precaution, was the first to see the oncoming Karlsruhe's light as she loomed out of the fog. Some weeks later, he was summoned to an inquiry into the accident by the Marine Court in Bremerhaven, causing him to fear that he might somehow be blamed for the collision and lose his freshly-minted license, thereby ending his budding career as a Merchant Marine officer when it was barely begun, but the Court ruled that the weather was solely to blame for the accident.[3]

Prien passed his captain's examination and received his Master's License in January 1932, but was unable to find work due to the severe contraction of the German shipping industry during the Depression years. He returned to Leipzig and, failing to find work there, was finally forced to turn to the Assistance Board for sustenance. Angry with what he considered to be an inept government, which seemed impotent in the face of the country's economic disaster, he joined the National Socialist Party in May 1932.[4] (In Wolf Pack: The Story of the U-Boat in World War II, Gordon Williamson states that the navy did not accept members of the Nazi Party NSDAP or the SS and one was obliged to revoke his membership in the party before joining.) Donald Macintyre described Prien as "the most Nazified U-boat captain", "an ardent ruthless Nazi" (article, p 32 onwards, in issue 4 of War Monthly, Marshall Cavendish 1974). Bored and restless, in August 1932 Prien joined the voluntary labor corps of Vogtsberg at Olsnitz, where he literally dug ditches for several months, quickly rising to the rank of Group Leader and then deputy to the camp commander.

Having heard that the navy was giving commissions to Merchant Marine officers in order to fill out its ranks after the loss of the Niobe, Prien applied to the Reichsmarine,[Note 2] on 16 January 1933 and was accepted as an "Officer Aspirant," with the rank of ordinary sailor. He underwent standard training and served on the light cruiser Königsberg before he was posted to the U-Boat training school at Kiel. At the end of U-Boat training he was posted to U-26 at the Deutsche Schiff- und Maschinenbau AG (Deschimag) Yard in Bremen as First Officer of the watch. U-26 at the time was under the command of Kapitänleutnant Werner Hartmann. U-26 went on two patrols in 1937 (6 May – 15 June and 15 July – 30 August) during the Spanish Civil War.

Prien rose steadily in rank, from Fähnrich zur See (midshipman) in 1933, to Oberfähnrich zur See (senior midshipman) in 1935, Leutnant zur See (acting sub-lieutenant/US ensign) also in 1935, then Oberleutnant zur See (sub-lieutenant/US lieutenant j.g.) in 1937. He was appointed to the command of the new Type VIIB U-47 on her commissioning (17 December 1938) and promoted to Kapitänleutnant (lieutenant) on 1 February 1939. Prien married his fiancée Ingeborg in 1939, with whom he had two daughters, Birgit and Dagmar.

A model of Günther Prien's U-47, a Type VII diesel-electric hunter.

World War II commenced during Prien's first patrol in U-47. He departed Kiel on 19 August 1939 for a patrol lasting 28 days. On 5 September, he sank the British ship Bosnia, the second U-boat kill of the war. Two more British vessels fell victim to Prien over the next two days. U-47 returned to Kiel on 15 September. 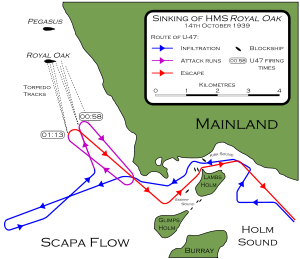 Infiltration of Scapa Flow by U-47

On 14 October 1939, Prien risked shallow water, unknown shoals, tricky currents and detection by defenders to penetrate the Royal Navy's primary base, Scapa Flow. Although most of the Home Fleet was at sea, Prien sank the battleship Royal Oak and returned home to instant fame. He was awarded the Knight's Cross of the Iron Cross, personally by Adolf Hitler, and was the first sailor of the U-boat service and the second member of the Kriegsmarine to receive this award. The mission into Scapa Flow called for volunteers only; Prien had no hesitation in accepting the mission. In a token to the voluntary nature of the mission, Prien spoke to his crew while U-47 was lying off Scapa Flow, and having briefed them, he announced that anyone not wishing to volunteer could leave the boat immediately. Unsurprisingly, no one accepted the offer to disembark in the middle of the North Sea. Prien received the nickname Der Stier von Scapa Flow ("The Bull of Scapa Flow"); the emblem of a snorting bull was painted on the conning tower of U-47 and soon became the emblem of the entire 7th U-boat Flotilla. Two members of the Scapa Flow crew earned the Knight's Cross of the Iron Cross during World War II: the chief engineer (Leitender Ingenieur) Johann-Friedrich Wessels and 1st watch officer (I. Wachoffizier) Engelbert Endrass.

Kept secret by the German naval command was the fact that Prien had fired a total of seven torpedoes at his target, of which five failed because of long-standing problems with their depth steering and their magnetic detonator systems. These problems continued to bedevil the German submariners for a long time and particularly during the German invasion of Norway, when the U-boats were unable to keep the Royal Navy at bay.

U-47 under the command of Prien with 1st watch officer (I. WO) Oberleutnant zur See Engelbert Endrass and chief engineer Oberleutnant (Ing.) Johann-Friedrich Wessels left Kiel on 16 November 1939.[5] U-47 attacked a British cruiser on 28 November 1939. Prien had identified the ship to be a London-class cruiser. Prien fired a spread of three torpedoes, and believed he had hit the cruiser at least once. He had observed through the periscope how one torpedo struck the stern of the cruiser, causing the deck side mounted aircraft to go overboard. Prien surfaced and tried to pursue the cruiser but was driven off by depth charges dropped from the escort. It turned out the cruiser was HMS Norfolk which was slightly damaged by the torpedo detonating close by.[6] The attack was reported in the daily Wehrmachtbericht on 29 November 1939, claiming the destruction of the cruiser. The war diary of the Befehlshaber der U-Boote (BdU) on 17 December 1939 stated that even though a hit was observed the cruiser was not sunk.[5]

On 5 December 1939 U-47 spotted 12 merchant vessels escorted by 3 destroyers. Prien fired three torpedoes sinking the British steamer Navasota from Convoy OB 46 on its way to Buenos Aires, killing 37 sailors.[7] The next day at 20:29 the Norwegian tanker Britta was sunk killing 6 of her crew followed by the Dutch Tajandoen on 7 December 1939. Trimming the boat on 8 December 1939, Wessels reported that the boat only had sufficient fuel to make the return trip. The BdU ordered U-47 to return to port.[8] U-47 returned to Kiel on 18 December 1939. The claims made by Prien are noted in the war diary of the BdU on 17 December 1939:

Amongst the ships sunk by U-47 was the SS Arandora Star, carrying over 1,200 German and Italian civilian internees and 86 German prisoners of war to captivity in Canada. Over 800 lives were lost.

Following later patrols and raids on Allied merchant shipping, Prien was awarded the Oak Leaves to the Knight's Cross in 1940.

U-47 went missing on 7 March 1941 while attacking Convoy OB-293. She has generally been thought to have been sunk by the British destroyer HMS Wolverine west of Ireland; the submarine was attacked by Wolverine and HMS Verity, which took turns covering each other's ASDIC blind spots and dropping patterns of depth charges until U-47 rose almost to the surface before sinking and then exploded with an orange flash visible from the surface.[10]

To date, there is no official record of what happened to U-47 or her 45 crewmen, though a variety of possibilities exists, including mines, a mechanical failure, falling victim to her own torpedoes, and possibly a later attack that did not confirm any kills by the corvette team of HMS Camellia and HMS Arbutus.[11][12][13]

Prien's death was kept secret until 23 May.[10] Churchill had personally announced it to the House of Commons, and propaganda broadcasts to Germany had repeatedly taunted listeners with the question "Where is Prien?" until Germany was forced to acknowledge his loss.[14]

Although Prien was at sea for less than two years, his record stands high among the U-boat aces during the Second World War. He spent 238 days at sea and sank 30 enemy vessels for a total tonnage of 193,808 GRT.

German actor Dieter Eppler played commander Günther Prien in the 1958 war film U 47 – Kapitänleutnant Prien, directed by Harald Reinl.[15] Günther Prien had been considered as namesake for the 1967 commissioned guided missile destroyer Lütjens. However the legend surrounding Prien, that he had distanced himself from Nazism and had become an active member of the German resistance and was held captive at the Wehrmachtgefängnis Torgau (Torgau Wehrmacht Prison), turned out to be false. Consequently, the name Lütjens, named after Admiral Günther Lütjens, was chosen instead.[16]