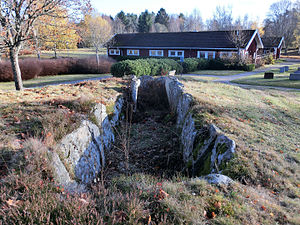 Gallery grave, missing a portion of its tumulus and all its stone caps, in a cemetery in Herrljunga, Sweden.

A gallery grave is a form of megalithic tomb built primarily during the Neolithic Age[1] in Europe in which the main gallery of the tomb is entered without first passing through an antechamber or hallway.[1][2][3] There are at least four major types of gallery grave (complex, transepted, segmented, and wedge-shaped), and they may be covered with an earthen mound (or "tumulus") or rock mound (or "cairn").

Archeologist T. Douglas Price argues that the gallery grave was a form of community burial site. Those placed in a gallery grave were most likely members of the same family or hamlet, and probably were intended to reinforce the sense of community.[3]

Gallery graves may be straight, or they may form an ell.[1] In some cases, a burial chamber exists at the end of the gallery.[4] The walls of gallery graves were built of orthostats, slab-like stones set upright in the earth.[5][6] They were roofed with multiple flat stones, although the burial chamber (if one existed) was usually roofed with a single large stone.[7] Multiple burials could occur all at one time, the grave could be reopened several times to accept new burials, or the grave could remain open over an extended period of time to accept multiple burials.[8] 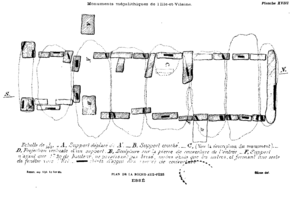 Drawing of the plan of the segmented gallery grave at La Roche-aux-Fées in France. Capstones (forming the ceiling) are represented by dotted lines.

Along with the dolmen and passage grave, the gallery grave is the most common megalithic tomb in western Europe.[17][18] 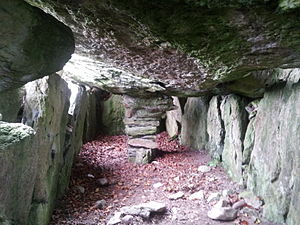 Interior of Labbacallee, a wedge-shaped gallery grave in Ireland.

Archeologists Ian Shaw and Robert Jameson argued in 1999 that the best-researched gallery graves are the Severn-Cotswold tombs in Wales and South West England in the United Kingdom.[1] Other important gallery graves include: