It was formerly headquartered in Vitoria-Gasteiz, Spain, but subsequently moved in 2010 to Zamudio, Biscay in northern Spain. Gamesa develops, manages and sells wind farms, for which it also supplies wind turbines. It is the market leader in Spain and the fourth largest wind turbine manufacturer in the world (2011).[2]

Gamesa began operations in 1976 focused at that time on developing new technologies and applying them to emerging activities. These included robotics, microelectronics, aeronautics and the development of composite materials. In 1994, Gamesa Eólica was created as a subsidiary specializing in the manufacture of wind turbines. The company became involved in the development, construction and operations of wind farms in 1995 and completed its first wind farm the following year. Gamesa had a 7-year partnership with Vestas that ended in 2002.[3]

The Corporation was officially listed on the stock exchange on 31 October 2000 and joined the selective IBEX 35 on 24 April 2001.

As part of the United Kingdom's move to expand its production of offshore wind energy production, Gamesa has committed to the expenditure of £133.7M on a production factory and other facilities in the UK, and will also move its offshore wind division headquarters to London.[5][6]

In 2016, Gamesa discussed a merger with Siemens Wind Power.[8][9][10] An analyst considers Gamesa's strength in China and India as a strategic asset for Siemens.[11] However, Areva Wind has a joint venture with Gamesa called Adwen, which is a source of contention during negotiations between Gamesa and Siemens, as Siemens was reluctant to fund factories and development of an 8 MW turbine in France.[12]

Gamesa is listed on the Dow Jones Sustainability Index,[13] the FTSE4Good Indexx[14] which is concerned with corporate social responsibility on the KLD Global Climate 100 Index, and on the Global 100 Index of the 100 most sustainable companies in the world.[15]

Gamesa is involved in the construction of the Allegheny Ridge Wind Farm and the Mt Stuart Wind Farm. 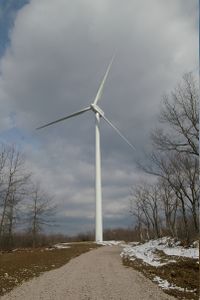