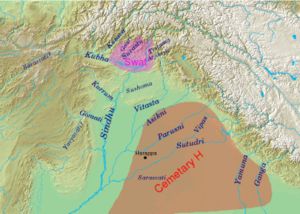 Geography of the Rigveda, with river names; the extent of the Swat and Cemetery H cultures are indicated. 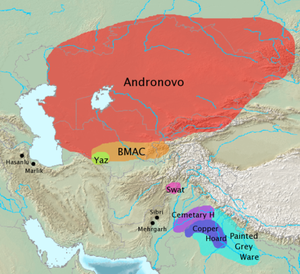 The Gandhara grave culture, also called Swat culture, emerged c. 1600 BC, and flourished c. 1500 BCE to 500 BCE in Gandhara, which lies in modern-day Pakistan and Afghanistan. It has been regarded as a token of the Indo-Aryan migrations, but has also been explained by local cultural continuity.

Relevant finds, artifacts found primarily in graves, were distributed along the banks of the Swat and Dir rivers in the north, Taxila in the southeast, along the Gomal River to the south. Simply made terracotta figurines were buried with the pottery, and other items are decorated with simple dot designs. Horse remains were found in at least one burial.

The Gandhara grave culture may be an artifact of the Indo-Aryan migrations, but it may also be explained by regional cultural continuity.

The pottery finds of the Gandhara grave culture show clear links with contemporary finds from southern Central Asia (BMAC) and the Iranian Plateau[citation needed] and may be associated with early Indo-Aryan speakers as well as the Indo-Aryan migration into the Indian Subcontinent,[1] which came from the Bactria–Margiana region. According to Kochhar, the Indo-Aryan culture fused with indigenous elements of the remnants of the Indus Valley Civilization (OCP, Cemetery H) and gave rise to the Vedic Civilization.[1]

Asko Parpola argues that the Gandhara grave culture is "by no means identical with the Bronze Age Culture of Bactria and Margiana".[2] According to Tusa, the Gandhara grave culture and its new contributions are "in line with the cultural traditions of the previous period".[3] According to Parpola, in the centuries preceding the Gandhara culture, during the Early Harappan period (roughly 3200–2600 BCE), similarities in pottery, seals, figurines, ornaments etc. document intensive caravan trade between the Indian Subcontinent and Central Asia and the Iranian plateau.[4] Tusa remarks that

... to attribute a historical value to [...] the slender links with northwestern Iran and northern Afghanistan [...] is a mistake[, since] it could well be the spread of particular objects and, as such, objects that could circulate more easily quite apart from any real contacts.[3]

According to Kennedy, who argues for a local cultural continuity, the Gandhara grave culture people shared biological affinities with the population of Neolithic Mehrgarh. This suggests a "biological continuum" between the ancient populations of Timargarha and Mehrgarh.[5] This is contested by Elena E. Kuz'mina, who notes remains that are similar to some from Central Asian populations.[6]

Antonini,[7] Stacul and other scholars argue that this culture is also not related with the Beshkent culture of Kyrgyzstan and Vakhsh culture of Tajikistan.[8] However, E. Kuz'mina argues the opposite on the basis of both archaeology and the human remains from the separate cultures.[9]