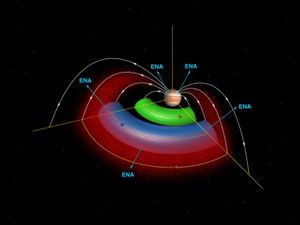 A gas torus is a toroidal cloud of gas or plasma that encircles a planet. In the Solar System, gas tori tend to be produced by the interaction of a satellite's atmosphere with the magnetic field of a planet. The most famous example of this is the Io plasma torus, which is produced by the ionization of roughly 1 ton per second of oxygen and sulfur from the tenuous atmosphere of Jupiter's volcanic moon, Io. Other examples include the largely neutral torus of oxygen and hydrogen produced by Saturn's moon, Enceladus, and the proposed (though not observationally supported) torus of nitrogen produced by Saturn's moon Titan.

A notable use of a gas torus in fiction is as the setting for Larry Niven's novels The Integral Trees and The Smoke Ring, in which a gas giant in orbit around a neutron star generates a gas torus of sufficient density to allow life (including humans) to survive in it. This arrangement is not particularly plausible in the real world, however[citation needed].