Gatwick Airport station is the railway station at London Gatwick Airport which provides a direct rail connection to London 26 3⁄4 miles (43.0 km) away. The station platforms are located about 70 metres to the east of the airport's South Terminal, with the ticket office above the platforms. The station was one of 18 in the United Kingdom to be managed by Network Rail,[1] but on 29 January 2012 day-to-day management was transferred to Southern.[2] Train services are provided by Gatwick Express, Southern, Thameslink and Great Western Railway. When viewed from the air (or in satellite imagery), the present station building's British Rail logo that is etched on the top of the roof is visible.[3]

In terms of passenger entries and exits between April 2010 and March 2011, Gatwick Airport was the tenth-busiest station outside London.[4]

London Oyster cards and contactless cards have been accepted for travel from 11 January 2016.[5]

There have been two Gatwick stations sited approximately 0.85 miles (1.37 km) from each other.

The station, originally named Gatwick, was built on the present site in September 1891 to serve the Gatwick Racecourse, and originally operated only on race days. The facilities included passing loops and sidings to hold race trains without impeding the Brighton Main Line.[6] The sidings were extended during World War I to be able to accommodate munitions trains heading for Newhaven.[7]

From 1946 until 1958, Gatwick station was renamed Gatwick Racecourse, even though racing had been abandoned in 1940 and not reinstated after World War II. In fact the station had fallen out of use following the opening of the nearby Tinsley Green/Gatwick Airport Station (described below). However, during the early 1950s the airport was expanded and took over the land occupied by the racecourse, and the station was entirely rebuilt and integrated with the new airport terminal. The new buildings opened on 27 May 1958 with a regular train service, and the station took over the name Gatwick Airport.

The 1958 buildings included a parcels office below the main concourse, lifts and a corridor on the south side of the overbridge, divided from the passenger corridor by a glazed partition. To accommodate 12-car trains, the three old Racecourse island platforms were raised by 1 ft (0.30 m) and extended to the north by about 100 ft (30 m), except for the very long westernmost platform, which was reduced from the south. The ticket office was able to handle 670 separate issues of Edmondson tickets from its Bellmatic equipment. The signalbox was retained on the centre platform.[8]

This was opened on 30 September 1935 and was sited 0.85 miles (1.37 km) south of the present station. It was originally named Tinsley Green but within a year became Gatwick Airport following the completion of the Beehive airport terminal which had a direct connection to the station. The airport was requisitioned by the Royal Air Force in 1940. In 1952 the British government decided that it would form London's second airport. The station continued in operation until 27 May 1958 when the present Gatwick Airport station (above) opened. The station was later demolished and the only visible remains of the old station are sections of the former up slow line platform. Sections of the connecting subway between the station and the original terminal building (The Beehive) also survive.

On 13 October 2010, a £53 million redevelopment was announced to provide a new platform, refurbish the concourse and upgrade track and signals.[9] Works were completed by 3 February 2014, when Baroness Kramer formally opened the new platform.[10] Constructed by Volker Fitzpatrick, the new 12-car platform 7 is served by a 975-metre (3,199 ft) loop from the Down Fast line and is used by the Down Fast services which formerly called at platform 5.[11] This has allowed platforms 5 and 6 to be dedicated to Gatwick Express services, thereby eliminating conflicts with slower services when formerly they crossed to platforms 1 and 2.[11][12] New escalators and lifts on platforms 5 and 6 were also provided.[11] 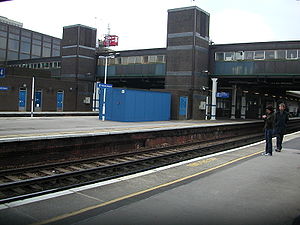 Northbound view from Platform 5 in March 2007 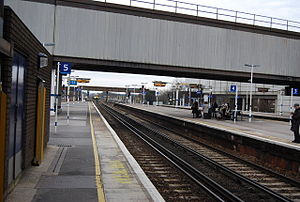 Southbound view from Platform 5 in February 2009

Gatwick station is served by: