The gayal differs in several important particulars from the gaur. It is somewhat smaller, with proportionately shorter limbs, and stands much lower at the withers. The ridge on the back is less developed, and bulls have a larger dewlap on the throat. The head is shorter and broader, with a perfectly flat forehead and a straight line between the bases of the horns. The thick and massive horns are less flattened and much less curved than in the gaur, extending almost directly outwards from the sides of the head, and curving somewhat upwards at the tips, but without any inward inclination. Their extremities are thus much farther apart than in the gaur. The female gayal is much smaller than the bull, and has scarcely any dewlap on the throat. The skin colour of the head and body is blackish-brown in both sexes, and the lower portion of the limbs are white or yellowish. The horns are of uniform blackish tint from base to tip. Some domesticated gayals are parti-coloured, while others are completely white.[2]

Gayals are essentially inhabitants of hill-forests. In India, semi-domesticated gayals are kept by several ethnic groups living in the hills of Tripura, Mizoram, Assam, Arunachal Pradesh, and Nagaland. They also occur in the Chittagong Hill Tracts.[2] In northern Burma, they occur in the Kachin State, and in adjacent Yunnan are found only in the Trung (Chinese: 独龙河) and Salween River basins.[1] In Nagaland, the animals are kept semi-wild, and live in herds, being watched over by special caretakers assigned by the villages or the owner of the herd. They respond to a horn kept specially for the individual caretaker or actual owner to call them. From birth until the time of butchering or market, the Mithun remain in the herd, and roam mostly freely throughout the forests.

The role of the mithun is central to the lives of many residents of these areas, including transhumant ones who pair mithun management with sago palm harvesting:

Although livestock is highly characteristic of the high Himalayan way of life in general, with yaks and sheep being predominant species until recently, the mithun, or gayal (Bos frontalis) is the most prominent animal exploited by Eastern Himalayan groups (Figure 4). The mithun is a semi-domesticate, managed in fenced tracts of forests rather than being kept in or near villages. Outside North East India, mithun are primarily imported for the purpose of cross- breeding with other bovids, for example in Bhutan. It is very common among Eastern Himalayan languages to find lexical sets denoting fauna in which the mithun is lexicalized as a “prototypical” meat animal, with all other terms being derived. [...] Terms for ‘mithun’ in other languages of Arunachal Pradesh are typically cognate with Aka fu (e.g. Miji ʃu, Koro sù, Puroik ʧa and Proto-Tani *ɕo), suggesting that this is probably not a case of semantic shift from a wild species. The implication is that the semi-wild mithun was seen as the core species, and the true domesticates such as cattle, which arrived subsequently, as marginal to the system.[3]

In his first description of 1804, Aylmer Bourke Lambert applied the binomial Bos frontalis to a domestic specimen probably from Chittagong.[4]

In 2003, the International Commission on Zoological Nomenclature fixed the first available specific name based on a wild population that the name for this wild species is valid by virtue of its being antedated by a name based on a domestic form. Most authors have adopted the binomial Bos frontalis for the domestic species as valid for the taxon.[5]

Phylogenetic analysis corroborates the taxonomic assessment that the gayal is an independent Bos species originating matrilineally from gaur, zebu and cattle.[6] 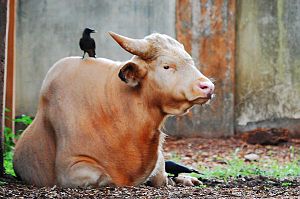 A mithun in Thrissur Zoo

To the Nyishi people or Adi people (Bangni-Bokar Lhobas incl pasi, padam, minyong, Galong now Galo), the possession of gayal is the traditional measure of a family's wealth. Gayal are not milked or put to work but given supplementary care while grazing in the woods, until they are ritually slaughtered or killed for local consumption. Mithun's are wild and each family has a very indigenous marking as a cut on the ear.

The gayal is the state animal of Arunachal Pradesh and Nagaland. Gayals play an important role in the social life of the people in Arunachal Pradesh. Marriages are not fixed until the bridegroom's family gives at least one gayal to the bride's household.[citation needed]

Gayals are left in the forest, where they usually stay within a small perimeter. Females are usually aggressive when with calves, and there are instances known when people have been severely injured after being gored by one. Male are usually more docile.[citation needed]