The General Electric Company, or GEC, was a major UK-based industrial conglomerate involved in consumer and defence electronics, communications, and engineering. The company was a constituent of the FTSE 100 Index.

In December 1999, GEC's defence arm, Marconi Electronic Systems, was amalgamated with British Aerospace to form BAE Systems. The rest of GEC continued as Marconi plc.[1] The financial troubles that followed the bursting of the dot-com bubble in 2001 led to the restructuring in 2003 of Marconi plc into Marconi Corporation plc.[2]

In 2005, Ericsson acquired the bulk of Marconi Corporation plc, along with its principal subsidiary, Marconi Communications. The remainder of the business was renamed Telent. 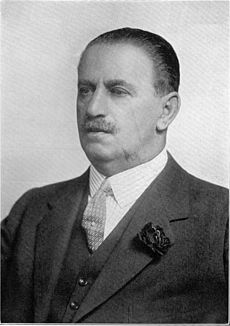 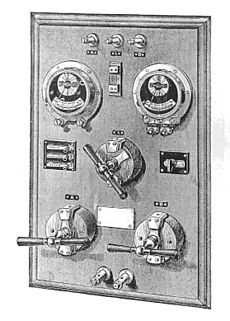 GEC had its origins in the G. Binswanger and Company, an electrical goods wholesaler established in London in the 1880s by a German-Jewish immigrant, Gustav Binswanger (later Gustav Byng).[3][4] Regarded as the year GEC was founded, 1886 saw a fellow immigrant, Hugo Hirst, join Byng, and the company changed its name to The General Electric Apparatus Company (G. Binswanger).[4]

Their small business found early success with its unorthodox method of supplying electrical components over the counter. Hugo Hirst was an entrepreneurial salesman who saw the potential of electricity and was able to direct the standardisation of an industry in its infancy. He travelled across Europe with an eye for the latest products, and in 1887 the company published the first electrical catalogue of its kind.[4] The following year, the company acquired its first factory in Salford, where electric bells, telephones, ceiling roses and switches were manufactured.[4]

In 1889, the business was incorporated as a private company known as General Electric Company Ltd.[4] The company was expanding rapidly, opening new branches and factories and trading in 'everything electrical', a phrase that was to become synonymous with GEC.

In 1893, it decided to invest in the manufacture of lamps. The resulting company, (to become Osram in 1909),[clarification needed] was to lead the way in lamp design, and the burgeoning demand for electric lighting was to make GEC's fortune.

In 1902, its first purpose-built factory, the Witton Engineering Works, was opened near Birmingham.

With the death of Gustav Byng in 1910, Hugo Hirst became the chairman as well as managing director, a position he had assumed in 1906.[4] Hirst's shrewd investment in lamp manufacture was proving extremely profitable. In 1909, Osram began production of the most successful tungsten filament lamps in the industry. Rapidly-growing private and commercial use of electricity created huge demand. The company expanded both at home and overseas, with the establishment of agencies in Europe, Japan, Australia, South Africa, and India. It also did substantial trade with South America.

The outbreak of World War I transformed GEC into a major player in the electrical industry. It was heavily involved in the war effort, with products such as radios, signal lamps, and the arc-lamp carbons used in searchlights.[4]

Between the wars, GEC expanded to become a global corporation and national institution. The takeover of Fraser and Chalmers in 1918 took GEC into heavy engineering and bolstered their claim to supply 'everything electrical'. In the same year, the maker of electricity meters, Chamberlain and Hookham, was also acquired by GEC.[5]

In 1917, GEC created the Express Lift Company in Northampton, England.[6]

In 1919, GEC merged its radio valve manufacturing interests with those of the Marconi Company to form the Marconi-Osram Valve Company.[7]

In the 1920s, the company was heavily involved in the creation of the UK National Grid.[4] The opening of a new purpose-built company headquarters in Kingsway, London in 1921, and the pioneering industrial research laboratories at Wembley in 1923,[8] were symbolic of the continuing expansion of both GEC and the electrical industry.[4]

In World War II, GEC was a major supplier to the military of electrical and engineering products.[4] Significant contributions to the war effort included the development in 1940 of the cavity magnetron for radar,[4] by the scientists John Randall and Harry Boot at the University of Birmingham, as well as advances in communications technology and the ongoing mass production of valves, lamps and lighting equipment.

The post-war years saw a decline in GEC's expansion. After the death of Hugo Hirst in 1943, his son-in-law Leslie Gamage, along with Harry Railing, took over as joint managing directors. Despite the huge demand for electrical consumer goods, and large investments in heavy engineering and nuclear power, profits began to fall in the face of competition and internal disorganisation.

In 1961, GEC merged with Sir Michael Sobell's company, Radio & Allied Industries Ltd., and with it emerged the new power behind GEC, Sobell's son-in-law Arnold Weinstock, who became the Managing Director of GEC in 1963, and moved its headquarters from Kingsway to a new building at 1 Stanhope Gate in Mayfair.[4]

Weinstock embarked on a programme to rationalise the entire UK electrical industry, beginning with the internal rejuvenation of GEC. In a drive for efficiency, Weinstock made cut-backs and instigated mergers, injecting new growth into the company. GEC returned to profit and the financial markets' confidence was restored.

The Witton works remained one of the company's biggest sites, producing high-voltage switchgear and transformers, small motors, mercury arc rectifiers and traction components, until the plant was gradually sold off by Weinstock in 1969.

The company continued to expand with the acquisition of W & T Avery Ltd. in 1979.

In 1981, GEC acquired two more U.S. companies: Mitel and the Picker Corporation, an American manufacturer of medical imaging equipment.[9] GEC merged Picker with Cambridge Instruments, GEC Medical, and American Optical to form Picker International (PI). GEC Medical was itself an amalgamation of Watson & Sons Ltd, formed in the early 20th century in London and long a part of GEC, and A E Dean & Co of Croydon. In 1982, PI introduced the first 1.0T magnetic resonance imaging (MRI) unit. In 1998, it acquired the CT division of Elscint Ltd. In 1999, the company changed its name to Marconi Medical Systems. In 2001, Philips Electronics bought Marconi Medical Systems for $1.1 billion.[10]

GEC had become the UK's largest and most successful company and private employer, with about 250,000 employees.[citation needed] In 1984, GEC became one of the first 100 companies to enter the FTSE 100 Index, ranking third behind British Petroleum and Shell Transport and Trading.

In 1985, it acquired Yarrow shipbuilders from British Shipbuilders.

The late 1980s witnessed some big mergers within the electrical industry, with the creation of GEC-Plessey Telecommunications (GPT) by GEC and Plessey in 1988.[4] The following year, GEC and Siemens formed a joint company, GEC Siemens plc, to take over Plessey. As part of the deal, GEC took control of Plessey's avionics and naval systems businesses.[4]

In 1989, GEC and Compagnie Générale d'Electricité (CGE) merged their power generation and transport businesses in a new joint venture, GEC-ALSTHOM.[4]

In 1996, the Otis Elevator Company acquired The Express Lift Company from GEC.[11]

The move towards electronics and modern technology, particularly in the defence sector, was a departure from the domestic electrical goods market. GEC acquired the Edinburgh-based Ferranti Defence Systems Group in 1990 as well as part of Ferranti International's assets in Italy.[13] It also bought Vickers Shipbuilding and Engineering Ltd. (VSEL) in 1995. VSEL was willing to participate in a merger with a larger company to reduce its exposure to cycles in warship production, particularly in light of the post-Cold War "Options for Change" defence review. Following GEC's purchase, VSEL became Marconi Marine (VSEL).

Lord Weinstock retired as managing director in 1996, and was replaced by George Simpson, who embarked on a spate of U.S. mergers and acquisitions. In July 1997, GEC announced the outcomes of a major review: it would move away from its joint ventures and focus on moving toward "global leadership" in defence and aerospace (Marconi Electronic Systems), industrial electronics (GEC Industrial Electronics), and communications (GEC Communications).[14]

In February 1998, Marconi Instruments, the test equipment arm of GEC, was sold to IFR Systems.[15]

In March 1998, GEC announced the merger of its radar and avionics business with Alenia Difesa to form Alenia Marconi Systems.[16]

In June 1998, it completed the $1.4bn acquisition of major American defence contractor Tracor, which became part of MES.[17]

After most of its U.S. acquisitions failed, GEC began to make a loss. The cash reserves Lord Weinstock had built up during the 1980s and early 90s had all but gone, and the company was heavily in debt.[12]

Since October 1998, reports had been linking British Aerospace (BAe) with the German aerospace group DASA. GEC was even seen as a potential partner in a three-way merger with BAe and DASA.[18]

In December 1998, reports emerged that GEC was seeking a partner for MES, the value of which was greatly increased by the Tracor acquisition. Prospective partners included Thomson-CSF (by 1998 on the path to privatisation) and various American defence contractors (e.g. Lockheed Martin and TRW).[19]

GEC had already been active in pursuing consolidation in the defence business. In 1997, it made an ultimately unsuccessful bid to the French government to privatise Thomson-CSF and merge it with MES.

A merger of UK companies soon became the most likely development. In mid-January 1999, GEC and British Aerospace confirmed they were holding talks. On 19 January, it was announced British Aerospace was to acquire Marconi Electronic Systems for £7.7bn ($12.75bn).[20]

While the deal was yet to be completed, GEC used much of the anticipated proceeds of the MES sale to buy companies in 1999. This was part of a major realignment of the firm to focus on the burgeoning telecoms sector, and it become a radio, telecommunications and internet equipment manufacturer.

In April 2000, it acquired Mobile Systems International for £391m.

These acquisitions were made at the height of the dot-com bubble, and the bursting of the bubble in 2001 took a heavy toll on Marconi.[23][24][25]

In July 2001, Marconi plc suffered a 54% drop in its share price following the suspension of trading of its shares, a profits warning, and redundancies. Its managing director Lord Simpson was forced to resign. Shares that used to be worth £12.50 at GEC's peak had fallen to £0.04. Lord Weinstock's own stake, once worth £480 million, was reduced to £2 million.[12]

In 2005, the company failed to secure any part of BT's 21st Century Network (21CN) programme, surprising commentators and sending the company's shares tumbling. Before the announcement, the investment bank Dresdner Kleinwort had said, "[Marconi is] so advanced with its products and so entrenched with BT Group plc that its selection looks certain."[28] Various bids were received for the business, including one from Huawei Technologies, with whom Marconi already had a joint venture.[29]

Until the collapse of the Marconi group in 2005 and 2006, the company was a major supplier of Asynchronous Transfer Mode, Gigabit Ethernet, and Internet Protocol products. The majority of Marconi Corporation's businesses (including Marconi Communications) were sold to Ericsson in 2005,[30] and the remainder was renamed Telent plc.