The hierarchy of biological classification's eight major taxonomic ranks. A family contains one or more genera. Intermediate minor rankings are not shown.

A genus (/ˈdʒiːnəs/, pl. genera) is a taxonomic rank used in the biological classification of living and fossil organisms in biology. In the hierarchy of biological classification, genus comes above species and below family. In binomial nomenclature, the genus name forms the first part of the binomial species name for each species within the genus.

E.G., Felis catus and F. silvestris are two species within the genus Felis. Felis is a genus within the family Felidae.

The composition of a genus is determined by a taxonomist. The standards for genus classification are not strictly codified, so different authorities often produce different classifications for genera. There are some general practices used, however,[1] including the idea that a newly defined genus should fulfill these three criteria to be descriptively useful:

Moreover, genera should be composed of phylogenetic units of the same kind as other (analogous) genera.[3]

The term comes from the Latin genus ("origin; type; group; race"),[4] a noun form cognate with gignere ("to bear; to give birth to"). It probably came to Latin from the Arabic: Gins جنس‎‎ meaning type. Linnaeus popularized its use in his 1753 Species Plantarum, but the French botanist Joseph Pitton de Tournefort (1656–1708) is considered "the founder of the modern concept of genera".[5]

The scientific name of a genus may be called the generic name or generic epithet: it is always capitalized. It plays a pivotal role in binomial nomenclature, the system of naming organisms.

The rules for the scientific names of organisms are laid down in the Nomenclature Codes, which are employed by the speakers of all languages, giving each species a single unique Latinate name. The standard way of scientifically describing species and other lower-ranked taxa is by binomial nomenclature. The generic name forms its first half. For example, the gray wolf's binomial name is Canis lupus, with Canis (Lat. "dog") being the generic name shared by the wolf's close relatives and lupus (Lat. "wolf") being the specific name particular to the wolf. The specific name is written in lower-case and may be followed by subspecies names in zoology or a variety of infraspecific names in botany. Especially with these longer names, when the generic name is known from context, it is typically shortened to its initial letter.

Because animals are typically only grouped within subspecies, it is simply written as a trinomen with a third name. For example, because dogs are still so similar to wolves as to form part of their species but so distinct as to require separate treatment, they are described as C. lupus familiaris (Lat. "domestic"), while the "wolves" form many distinct subspecies, including the common wolf (C. lupus lupus) and the dingo (C. lupus dingo). Dog breeds, meanwhile, are not scientifically distinguished.

There are several divisions of plant species and therefore their infraspecific names generally include contractions explaining the relation. For example, the genus Hibiscus (Lat. "marshmallow") includes hundreds of other species apart from the Rose of Sharon or common garden hibiscus (H. syriacus, from Lat. "Syrian"). Rose of Sharon doesn't have subspecies but has cultivars that carry desired traits, such as the bright white H. syriaca 'Diana'.[6] "Hawaiian hibiscus", meanwhile, includes several separate species. Since not all botanists agree on the divisions or names between species, it is common to specify the source of the name using author abbreviations. For example, H. arnottianus A.Gray was first specified in a work by Asa Gray.[7] Sister Roe identified an immaculate white hibiscus on Molokai as a separate species,[8] but D.M. Bates later reclassified it as a subspecies of H. arnottianus.[9] It thus now appears as H. arnottianus ssp. immaculatus or as H. arnottianus A.Gray subsp. immaculatus (M.J.Roe) D.M.Bates. When it is considered a mere variety of H. arnottianus, it is written H. arnottianus var. immaculatus.

Each genus should have a designated type, although in practice there is a backlog of older names without one. In zoology, this is the type species and the generic name is permanently associated with the type specimen of its type species. Should the specimen turn out to be assignable to another genus, the generic name linked to it becomes a junior synonym and the remaining taxa in the former genus need to be reassessed.

Within the same kingdom one generic name can apply to only one genus. This is why the platypus belongs to the genus Ornithorhynchus: although George Shaw named it Platypus in 1799, that name had already been given to a group of ambrosia beetles by Johann Friedrich Wilhelm Herbst in 1793. Since beetles and platypuses are both members of the kingdom Animalia, the name could not be used for both. Johann Friedrich Blumenbach published the replacement name Ornithorhynchus in 1800.

However, a genus in one kingdom is allowed to bear a scientific name that is in use as a generic name (or the name of a taxon in another rank) in a kingdom that is governed by a different nomenclature code. Names with the same form but applying to different taxa are called "homonyms". Although this is discouraged by both the International Code of Zoological Nomenclature and the International Code of Nomenclature for Algae, Fungi, and Plants, there are some five thousand such names in use in more than one kingdom. For instance, Anura is the name of the order of frogs but also is the name of a non-current genus of plants; Aotus is the generic name of both golden peas and night monkeys; Oenanthe is the generic name of both wheatears and water dropworts; Prunella is the generic name of both accentors and self-heal; and Proboscidea is the order of elephants and the genus of devil's claws.

The type genus forms the base for higher taxonomic ranks, such as the family name Canidae ("Canids") based on Canis. However, this does not typically ascend more than one or two levels: the order to which dogs and wolves belong is Carnivora ("Carnivores"). 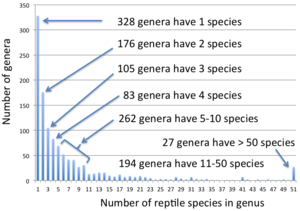 Number of reptile genera with a given number of species. Most genera have only one or a few species but a few may have hundreds. Based on data from the Reptile Database (as of May 2015).

Which species are assigned to a genus is somewhat arbitrary. Although all species within a genus are supposed to be "similar" there are no objective criteria for grouping species into genera. There is much debate among zoologists whether large, species-rich genera should be maintained, as it is extremely difficult to come up with identification keys or even character sets that distinguish all species. Hence, many taxonomists argue in favor of breaking down large genera. For instance, the lizard genus Anolis has been suggested to be broken down into 8 or so different genera which would bring its ~400 species to smaller, more manageable subsets.[11]