From Infogalactic: the planetary knowledge core
Jump to: navigation, search
"Earth orbit" and "Earth orbiter" redirect here. For the motion of the Earth around the Sun, see Earth's orbit. For the shuttle simulator, see Earth Orbiter 1.

The following words may have more than one definition or other non-Earth specific definition(s).
In the spirit of brevity some of the definitions have been altered or truncated to reflect only their usage on this page.

Altitude
as used here, the height of an object above the average surface of the Earth's oceans.

Analemma
a term in astronomy used to describe the plot of the positions of the Sun on the celestial sphere throughout one year. Closely resembles a figure-eight.

Apogee
is the farthest point that a satellite or celestial body can go from Earth, at which the orbital velocity will be at its minimum.

Eccentricity
a measure of how much an orbit deviates from a perfect circle. Eccentricity is strictly defined for all circular and elliptical orbits, and parabolic and hyperbolic trajectories.

Equatorial plane
as used here, an imaginary plane extending from the equator on the Earth to the celestial sphere.

Impulse
the integral of a force over the time during which it acts. Measured in (N·sec or lb * sec).

Orbital characteristics
the six parameters of the Keplerian elements needed to specify that orbit uniquely.

Orbital period
as defined here, time it takes a satellite to make one full orbit around the Earth.

Perigee
is the nearest approach point of a satellite or celestial body from Earth, at which the orbital velocity will be at its maximum.

Solar time
as used here, the local time as measured by a sundial.

Velocity
an object's speed in a particular direction. Since velocity is defined as a vector, both speed and direction are required to define it.

The following is a list of different geocentric orbit classifications. 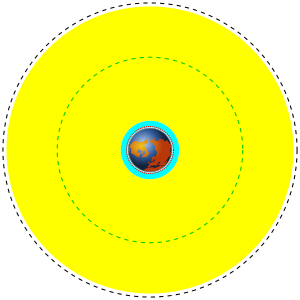 Geosynchronous orbit (GEO) - Geocentric circular orbit with an altitude of 35,786 kilometres (22,236 mi). The period of the orbit equals one sidereal day, coinciding with the rotation period of the Earth. The speed is approximately 3,000 metres per second (9,800 ft/s).

High Earth orbit (HEO) - Geocentric orbits with altitudes at apogee higher than that of the geosynchronous orbit. A special case of high Earth orbit is the highly elliptical orbit, where altitude at perigee is less than 2,000 kilometres (1,200 mi).[2]

Inclined orbit - An orbit whose inclination in reference to the equatorial plane is not 0.

Polar orbit - A satellite that passes above or nearly above both poles of the planet on each revolution. Therefore it has an inclination of (or very close to) 90 degrees.

Polar sun synchronous orbit - A nearly polar orbit that passes the equator at the same local time on every pass. Useful for image-taking satellites because shadows will be the same on every pass.

Circular orbit - An orbit that has an eccentricity of 0 and whose path traces a circle.

Elliptic orbit - An orbit with an eccentricity greater than 0 and less than 1 whose orbit traces the path of an ellipse.

Hohmann transfer orbit - An orbital maneuver that moves a spacecraft from one circular orbit to another using two engine impulses. This maneuver was named after Walter Hohmann.

Highly elliptical orbit (HEO) - Geocentric orbit with apogee above 35,786 km and low perigee (about 1,000 km) that result in long dwell times near apogee.

Molniya orbit - A highly elliptical orbit with inclination of 63.4° and orbital period of ½ of a sidereal day (roughly 12 hours). Such a satellite spends most of its time over a designated area of the Earth.

Tundra orbit - A highly elliptical orbit with inclination of 63.4° and orbital period of one sidereal day (roughly 24 hours). Such a satellite spends most of its time over a designated area of the Earth.

Hyperbolic trajectory - An "orbit" with eccentricity greater than 1. The object's velocity at perigee reaches some value in excess of the escape velocity, therefore it will escape the gravitational pull of the Earth and continue to travel infinitely with a velocity (relative to Earth) decelerating to some finite value, known as the hyperbolic excess velocity.

Escape Trajectory - This trajectory must be used to launch an interplanetary probe away from Earth, because the excess over escape velocity is what changes its heliocentric orbit from that of Earth.
Capture Trajectory - This is the mirror image of the escape trajectory; an object traveling with sufficient speed, not aimed directly at Earth, will move toward it and accelerate. In the absence of a decelerating engine impulse to put it into orbit, it will follow the escape trajectory after periapsis.

Parabolic trajectory - An "orbit" with eccentricity exactly equal to 1. The object's velocity at perigee equals the escape velocity, therefore it will escape the gravitational pull of the Earth and continue to travel with a velocity (relative to Earth) decelerating to 0. A spacecraft launched from Earth with this velocity would travel some distance away from it, but follow it around the Sun in the same heliocentric orbit. It is possible, but not likely that an object approaching Earth could follow a parabolic capture trajectory, but speed and direction would have to be precise.

Geostationary orbit (GSO): A geosynchronous orbit with an inclination of zero. To an observer on the ground this satellite would appear as a fixed point in the sky.

Clarke orbit - Another name for a geostationary orbit. Named after the writer Arthur C. Clarke.

Subsynchronous orbit - A drift orbit close to but below GSO/GEO. Satellites will drift east.

Graveyard orbit - An orbit a few hundred kilometers above geosynchronous that satellites are moved into at the end of their operation.

Sun-synchronous orbit - An orbit which combines altitude and inclination in such a way that the satellite passes over any given point of the planet's surface at the same local solar time. Such an orbit can place a satellite in constant sunlight and is useful for imaging, spy, and weather satellites.

Horseshoe orbit - An orbit that appears to a ground observer to be orbiting a planet but is actually in co-orbit with it. See asteroids 3753 (Cruithne) and 2002 AA29.

Exo-orbit - A maneuver where a spacecraft approaches the height of orbit but lacks the velocity to sustain it.

Sub-orbital spaceflight - A synonym for Exo-orbit.