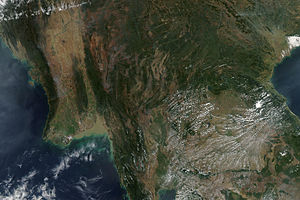 Hundreds of active fires burning across the hills and valleys of Myanmar Thailand, Laos, and Vietnam (labelled with red dots).

Myanmar (also known as Burma) is the northwestern-most country on the mainland of southeast Asia. It is strategically located near major Indian Ocean shipping lanes.

Burma is characterised by its central lowlands with the Sittaung Valley and Chindwin Valley and the small mountain ranges of Zeebyu Taungdan, Min-wun Taungdan, Hman-kin Taungdan and Gangaw Taungdan as well as the Bago Yoma.[1] The Central Valley Region is ringed by steep, rugged highlands, with the country's highest point at the 5,881 m (19,295 ft) Hkakabo Razi located in the northern end of the country. This mountain is part of a series of parallel ranges that run from the foothills of the Himalaya through the border areas with Assam, Nagaland and Mizoram. The Arakan Mountains in the west run from Manipur into western Burma southwards through Rakhine State almost to Cape Negrais in the shores of the Bay of Bengal. The Arakan Range includes the Naga Hills, the Chin Hills, and the Patkai range which includes the Lushai Hills.[2] Mountain ranges in the southern end of the Hengduan System form the border between Burma and China.

The Pegu Range is a relatively low mountain chain between the Irrawaddy and the Sittaung River in central Burma. In Eastern Burma the highest point of the Shan Hills is 2,563 m high Loi Pangnao, one of the ultra prominent peaks of Southeast Asia.[3] The Shan Hills form, together with the Karen Hills, Dawna Range and Tenasserim Hills, a natural border with Thailand as well as the Kayah-Karen/Tenasserim moist forests ecoregion[4] which is included in the Global 200 list of ecoregions identified by the World Wildlife Fund (WWF) as priorities for conservation.[5] Southern Burma consists largely of the western slopes of the Bilauktaung, the highest part of the Tenasserim Range, which extends southwards forming the central range of the Malay Peninsula.[6]

The Irrawaddy, the main river of Burma, flows from north to south through the Central Burma Basin and ends in a wide delta. The Mekong runs from the Tibetan Plateau through China's Yunnan province entering Northeastern Burma into Laos.

In the east the Salween and the Sittaung River run along the western side of the Shan Hills and the northern end of the Dawna Range. In the narrow southeastern part of Burma, the Ye, Heinze, Dawei (Tavoy), Great Tenasserim (Tanintharyi) and the Lenya rivers are relatively short and flow into the Andaman Sea. Further south the Kraburi River forms the southern border between Thailand and Burma.[7]

Land use and natural resources