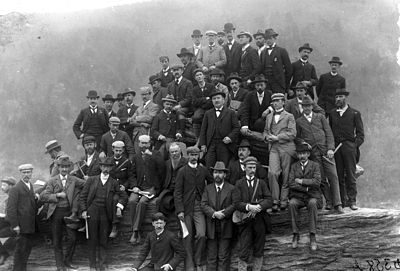 The Geological Society of America (GSA) is a nonprofit organization dedicated to the advancement of the geosciences.

The society was founded in New York in 1888 by Alexander Winchell, John J. Stevenson, Charles H. Hitchcock, John R. Procter and Edward Orton[1] and has been headquartered at 3300 Penrose Place, Boulder, Colorado, USA, since 1968.

The society has six regional sections in North America, an international section, and seventeen specialty divisions.

Annual meetings consist of oral and poster presentations about geology, along with field trips, short courses, and other activities. Another big part of the annual meeting is the Exhibit Hall, which includes the Graduate School Information Forum and booths for companies, suppliers, other geoscience organizations, and purveyors of goods and services.

As the need arises, GSA issues Position Statements "in support of and consistent with the GSA's Vision and Mission to develop consensus on significant professional, technical, and societal issues of relevance to the geosciences community. Position Statements, developed and adopted through a well-defined process, provide the basis for statements made on behalf of the GSA before government bodies and agencies and communicated to the media and the general public."[3]

For example, in 2006, the GSA adopted the Position Statement Global Climate Change:

The Geological Society of America (GSA) supports the scientific conclusions that Earth’s climate is changing; the climate changes are due in part to human activities; and the probable consequences of the climate changes will be significant and blind to geopolitical boundaries. Furthermore, the potential implications of global climate change and the time scale over which such changes will likely occur require active, effective, long-term planning.
Current predictions of the consequences of global climate change include: (1) rising sea level, (2) significant alteration of global and regional climatic patterns with an impact on water availability, (3) fundamental changes in global temperature distribution, (4) melting of polar ice, and (5) major changes in the distribution of plant and animal species. While the precise magnitude and rate of climate change cannot be predicted with absolute certainty, significant change will affect the planet and stress its inhabitants.[4]

Past presidents of the Geological Society of America [5]