The geological history of Mars employs observations, indirect and direct measurements, and various inference techniques to estimate the physical evolution of Mars. Methods dating back to 17th century techniques developed by Nicholas Steno, including the so-called law of superposition and stratigraphy, used to estimate the geological histories of Earth and the Moon, are being actively applied to the data available from several Martian observational and measurement resources. These include the landers, orbiting platforms, Earth-based observations, and Martian meteorites.

Observations of the surfaces of many Solar System bodies reveals important clues about their evolution. For example, a lava flow that spreads out and fills a large impact crater is likely to be younger than the crater. On the other hand, a small crater on top of the same lava flow is likely to be younger than both the lava and the larger crater since it can be surmised to have been the product of a later, unobserved, geological event. This principle, called the law of superposition, and other principles of stratigraphy, first formulated by Nicholas Steno in the 17th century, allowed geologists of the 19th century to divide the history of the Earth into the familiar eras of Paleozoic, Mesozoic, and Cenozoic. The same methodology was later applied to the Moon[1] and then to Mars.[2] 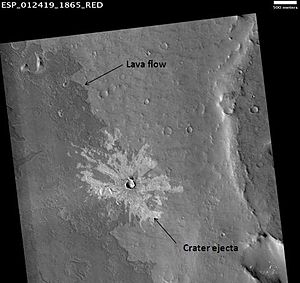 HiRISE image illustrating Steno's law of superposition. The dark-toned lava flow overlies (is younger than) the light-toned terrain at right. The ejecta of the crater at centre overlies both units, indicating that the crater is younger than both units.

Another stratigraphic principle used on planets where impact craters are well preserved is that of crater number density. The number of craters greater than a given size per unit surface area (usually million km2) provides a relative age for that surface. Heavily cratered surfaces are old, and sparsely cratered surfaces are young. Old surfaces have a lot of big craters, and young surfaces have mostly small craters or none at all.

These stratigraphic concepts form the basis for the Martian geologic timescale.

Stratigraphy establishes the relative ages of layers of rock and sediment by denoting differences in composition (solids, liquids, and trapped gasses). Assumptions are often incorporated about the rate of deposition, which generates a range of potential age estimates across any set of observed sediment layers.

The primary technique for calibrating the ages to the Common Era calendar is radiometric dating. Combinations of different radioactive materials can improve the uncertainty in an age estimate based on any one isotope.

By using stratigraphic principles, rock units' ages can usually only be determined relative to each other. For example, knowing that Mesozoic rock strata making up the Cretaceous System lie on top of (and are therefore younger than) rocks of the Jurassic System reveals nothing about how long ago the Cretaceous or Jurassic Periods were. Other methods, such as radiometric dating, are needed to determine absolute ages in geologic time. Generally, this is only known for rocks on the Earth. Absolute ages are also known for selected rock units of the Moon based on samples returned to Earth.

Assigning absolute ages to rock units on Mars is much more problematic. Numerous attempts[3][4][5] have been made over the years to determine an absolute Martian chronology (timeline) by comparing estimated impact cratering rates for Mars to those on the Moon. If the rate of impact crater formation on Mars by crater size per unit area over geologic time (the production rate or flux) is known with precision, then crater densities also provide a way to determine absolute ages.[6] Unfortunately, practical difficulties in crater counting[7] and uncertainties in estimating the flux still create huge uncertainties in the ages derived from these methods. Martian meteorites have provided datable samples that are consistent with ages calculated thus far,[8] but the locations on Mars from where the meteorites came (provenance) are unknown, limiting their value as chronostratigraphic tools. Absolute ages determined by crater density should therefore be taken with some skepticism.[9]

Studies of impact crater densities on the Martian surface[10] have delineated three broad periods in the planet's geologic history.[11] The periods were named after places on Mars that have large-scale surface features, such as large craters or widespread lava flows, that date back to these time periods. The absolute ages given here are only approximate. From oldest to youngest, the time periods are:

The date of the Hesperian/Amazonian boundary is particularly uncertain and could range anywhere from 3.0 to 1.5 Gya.[15] Basically, the Hesperian is thought of as a transitional period between the end of heavy bombardment and the cold, dry Mars seen today.

In 2006, researchers using data from the OMEGA Visible and Infrared Mineralogical Mapping Spectrometer on board the Mars Express orbiter proposed an alternative Martian timescale based on the predominant type of mineral alteration that occurred on Mars due to different styles of chemical weathering in the planet’s past. They proposed dividing the history of the Mars into three eras: the Phyllocian, Theiikian and Siderikan.[16][17]