From Infogalactic: the planetary knowledge core
Jump to: navigation, search
For the member of Animal Collective, see Geologist (musician).

A geologist is a scientist who studies the solid and liquid matter that constitutes the Earth as well as the processes and history that have shaped it. Geologists usually engage in studying geology. Geologists, studying more of an applied science than a theoretical one, must approach Geology using physics, chemistry and biology as well as other sciences. Geologists, compared to scientists engaged in other fields, are generally more exposed to the outdoors than staying in laboratories; although some geologists prefer to perform most of their studies in the lab. A geologists tool used for exploring are pickaxes, gloves, glasses, mining tools and a magnifying glass.

Geologists are engaged in exploration for mining companies in search of metals, oils, and other Earth resources. They are also in the forefront of natural hazards and disasters warning and mitigation, studying earthquakes, volcanic activity, tsunamis, weather storms, and the like; their studies are used to warn the general public of the occurrence of these events. Currently, geologists are also engaged in the discussion of climate change, as they study the history and evidence for this Earth process. 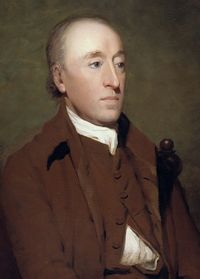 James Hutton is often viewed as the first modern geologist.[1] In 1785 he presented a paper entitled Theory of the Earth to the Royal Society of Edinburgh. In his paper, he explained his theory that the Earth must be much older than had previously been supposed in order to allow enough time for mountains to be eroded and for sediments to form new rocks at the bottom of the sea, which in turn were raised up to become dry land. Hutton published a two-volume version of his ideas in 1795 (Vol. 1, Vol. 2). Followers of Hutton were known as Plutonists because they believed that some rocks were formed by vulcanism, which is the deposition of lava from volcanoes, as opposed to the Neptunists, led by Abraham Werner, who believed that all rocks had settled out of a large ocean whose level gradually dropped over time. 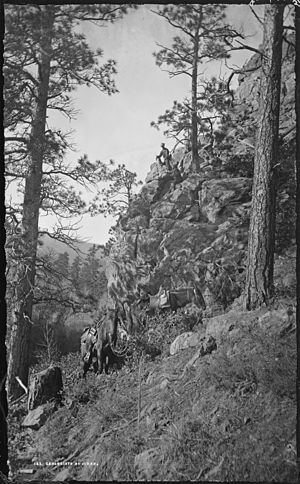 "Geologists at work" from the U.S. Geological and Geographic Survey of the Territories. (1874 - 06/30/1879) Photographer: William Henry Jackson

The first geological map of the U.S. was produced in 1809 by William Maclure.[2][3] In 1807, Maclure commenced the self-imposed task of making a geological survey of the United States. Almost every state in the Union was traversed and mapped by him; the Allegheny Mountains being crossed and recrossed some 50 times.[4] The results of his unaided labours were submitted to the American Philosophical Society in a memoir entitled Observations on the Geology of the United States explanatory of a Geological Map, and published in the Society's Transactions, together with the nation's first geological map.[5] This antedates William Smith's geological map of England by six years, although it was constructed using a different classification of rocks.

Sir Charles Lyell first published his famous book, Principles of Geology,[6] in 1830. This book, which influenced the thought of Charles Darwin, successfully promoted the doctrine of uniformitarianism. This theory states that slow geological processes have occurred throughout the Earth's history and are still occurring today. In contrast, catastrophism is the theory that Earth's features formed in single, catastrophic events and remained unchanged thereafter. Though Hutton believed in uniformitarianism, the idea was not widely accepted at the time.

For an aspiring geologist, training typically includes significant coursework in physics, mathematics, and chemistry, in addition to classes offered through the geology department; historical and physical geology, igneous and metamorphic petrology and petrography, hydrogeology, sedimentology, stratigraphy, mineralogy, palaeontology, physical geography and structural geology are among the many required areas of study. Most geologists also need skills in GIS and other mapping techniques. Geology students often spend portions of the year, especially the summer though sometimes during a January term, living and working under field conditions with faculty members (often referred to as "field camp"). Many non-geologists often take geology courses or have expertise in geology that they find valuable to their fields; this is common in the fields of geography, engineering, chemistry, urban planning, environmental studies, among others. 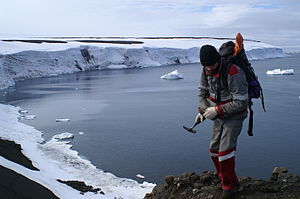 A geologist working in the Arctic 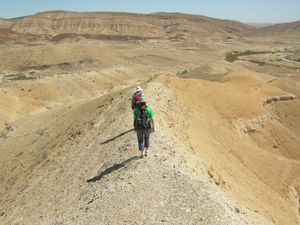 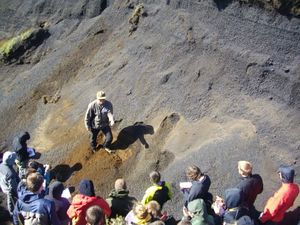 Geologists may concentrate their studies or research in one or more of the following disciplines: 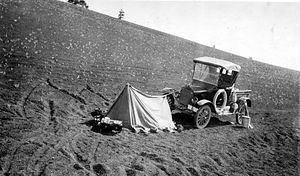 "Picturesque camp made by a lone geologist on the cinders of Inferno". This photo was taken during a U.S. Department of the Interior Geological Survey in 1921

Professional geologists work for a wide range of government agencies, private firms, and non-profit and academic institutions. They are usually hired on a contract basis or hold permanent positions within private firms or official agencies (such as the USGS).

Local, state, and national governments hire geologists to work on geological projects that are of interest to the public community. The investigation of a country's natural resources is often a key role when working for government institutions; the work of the geologist in this field can be made publicly available to help the community make more informed decisions related to the exploitation of resources, management of the environment and the safety of critical infrastructure - all of which is expected to bring greater wellbeing to the country.[7] This 'wellbeing' is often in the form of greater tax revenues from new or extended mining projects or through better infrastructure and/or natural disaster planning. 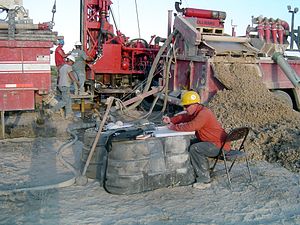 An engineering geologist is employed to investigate geologic hazards and geologic constraints for the planning, design and construction of public and private engineering projects, forensic and post-mortem studies, and environmental impact analysis. Exploration geologists use all aspects of geology and geophysics to locate and study natural resources. In many countries or US states without specialized environmental remediation licensure programs, such as Rhode Island and North Carolina, the environmental remediation field is often dominated by professional geologists, particularly hydrogeologists, with professional concentrations in this aspect of the field. Petroleum and mining companies use mudloggers and large-scale land developers use the skills of geologists and engineering geologists to help them locate oil and minerals, adapt to local features such as karst topography or earthquake risk, and comply with environmental regulations.

Geologists in academia usually hold an advanced degree in a specialized area within their geological discipline and are employed by universities. 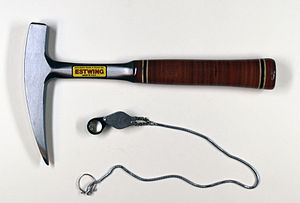 The rock hammer and hand lens (or loupe) are two of the most characteristic tools carried by geologists in the field.

Following the Bre-X scandal in 1997, where unethical company geologists salted drill core samples at a gold exploration property in Busang, Indonesia, a new mineral resource classification scheme was developed in Canada, referred to as National Instrument 43-101. The falsified drilling results misled investors in the Bre-X stock and upon discovery of the fraud, Bre-X collapsed and its shares became worthless in the biggest mining scandal of all time.[8]

NI 43-101 represented a new standard for reporting mineral resources and reserves to help prevent fraudulent reporting, which had a world-wide impact. Among other requirements, all reports containing estimates of mineral resources and reserves must be prepared or under the supervision of a Qualified Person (QP), who, by being named as such, accepts personal liability for the professional quality of the report and underlying work. A QP must have at least five years of experience including appropriate experience in the minerals being reported on and must be a member of a "professional association." Both geologists and engineers are typically designated as QP's in the mining, and oil and gas industries and as such, the professional designation for many qualified, professional geologists is "P.Geo."[9]