The geology of Massachusetts is the result of a process that began over a billion years ago. Massachusetts currently lies at an edge of a continent, and in the geological past has been the location of many continental collisions and collisions with other microcontinents and volcanic arcs, with their resulting mountain-building events. As a result, the state rock structure is squeezed together. Recently, multiple Ice Ages have shaped the modern geology of the state and have created notable landmarks such as Cape Cod. 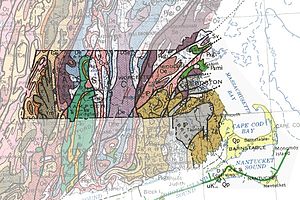 A geological map of the state, showing how the bedrock strata are squeezed together.

The early history of Massachusetts can be traced to around 1.2 to 1.1 billion years ago in the Mesoproterozoic Era. Ancient areas of continental crust or cratons formed the nuclei of continents. The ancient continent Rodinia was formed as a byproduct of the collisions of earlier cratonic fragments. Mountains were formed during the Grenville orogeny. Some of the rocks of the Berkshire highlands are from this era.[1]:8[1]:12

Around 750 million years ago, Rodinia began to break up and the Laurentian craton was formed. Two hundred million years later, Gondwana was formed. Laurentia increased in size because of the addition of Japan-sized islands. It is possible that the Merrimack, Nashoba, Avalon, and Meguma terranes that make up eastern Massachusetts are remnants of these island arcs or microcontinents. It is highly likely that these terranes broke off from Gondwana at some point in their history and collided with Laurentia, between 550 and 370 million years ago. These resulting collisions were part of the Taconic orogeny. The Iapetus Ocean, separating the two continents began to open up when Rodinia broke apart. The size of the ocean eventually prevented migrations between the two landmasses.[1]:10[1]:12

Between 425 and 370 million years ago, the two continents began to collide, forming Pangea. During this time, the Acadian orogeny, which marked the collision of the two continents, occurred. Around 200 million years ago, Pangea began to break apart. This caused rift valleys to form within the interior of the continent. One of these rift valleys, the Connecticut River Valley is a failed rift of the continent. Basalt dikes present in the underlying rocks of the valleys are the result of volcanism.[1]:11

The rocks of the Berkshire Hills were once the edge of the ancient continent of Laurentia. The Laurentian Terrane is made up of Grenville gneisses of Proterozoic age that formed at depth within the continent, continental shelf deposits, and the remains of two volcanic island chains, which constitute the Shelburne Falls and Bronson Hill volcanic chains. The Shelburne Fall] chain now lies in the Berkshire foothills, while the Bronson Hill chain lies just east of the present-day Connecticut River Valley. The Taconic Orogeny, which resulted from the collision of these volcano chains and the continent, helped to thrust, push, and metamorphose the group of Precambrian to early Paleozoic rocks between 485 and 440 million years ago. The terrane is also divided into six structural and stratigraphic divisions.[1]:13 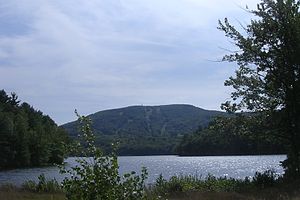 Mount Wachusett, which is part of the Gondwanan terrane

The rocks of the Gondwanan terrane are made up of four smaller terranes. These terranes were once part of other continents but have become fused onto the continent over the years.

It is generally agreed that two of the terranes, the Meguma and Avalon were once part of Gondwana. Proof of Avalon being part of Gondwana exists because of trilobite fossils of the same species that have been found both in Massachusetts and Africa. This means that Avalon must have broken away from Gondwana during the end of the Precambrian, around 550 million years ago. At the very latest, it broke away by the Ordovician, around 490 million years ago. Fossils of the Meguma terrane also indicate a relation to the northwest Africa margin. The Avalon also originated as a volcanic island chain near the South Pole, on the fringe of the Gondwanan supercontinent. It is possible that late Precambrian quartzites of the eastern part of the state were deposited as beach sands on the continental shelf of Gondwana. These deposits were eventually caught in the Avalonian mountain building event, the same deformation which helped to form the Avalonian island chain.[1]:14

The Nashoba and Merrimack terranes, lying west of the Avalon, probably formed in the ocean near Gondwana between the Cambrian and Silurian time. The basement rocks which form the backbone of the formation dating from the Cambrian through Silurian time possibly broke away from Gondwana and headed towards Laurentia, ahead of the Avalonia terrane. During the Cambrian, the Avalon, along with its companion terranes, began migrating from the South Pole. These terranes collided with each other over time, as recorded by granite plutons in the rocks.[1]:15

From west to east:

Around one million years ago, the landmass now known as North America began experiencing regular ice ages.[1]:20 Most of what is the northeastern United States was covered with increasingly deep snowfall which compacted to form glaciers. 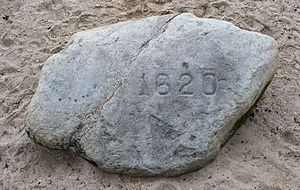 Plymouth Rock, a glacial erratic left behind at the end of the last glaciation period

During the Illinoian period, the Laurentide ice sheet covered the entire state in thousands of feet of ice. The Wisconsinan glaciation, thousands of years later, is the most recent glaciation. Mount Wachusett is estimated to have been covered with slightly more than four hundred feet of ice while Worcester was covered by ice that was fifteen hundred to two thousand feet deep. By 23,000 to 22,000 years ago, New England was covered in ice. The ice was so thorough in its destruction of the region that the only thing left from the previous glaciation was Noman's Land, southwest of Martha's Vineyard.[1]:21

The ice sheet also contained five glacial lobes which covered the state: the Hudson Valley lobe, the Connecticut Valley-Worcester Plateau lobe, the Narragansett Bay-Buzzards Bay lobe, the Cape Cod Bay lobe, and the South Channel lobe. Where each lobe met, dimples of sediment formed where the meltwater naturally flowed off the glaciers. Terminal moraines of sand and rock also formed at the end of these lobes. The lobes that bisected the state helped to form Long Island, Block Island, the Elizabeth Islands, Martha's Vineyard, Cape Cod, and Nantucket.[1]:21

A view of the retreating cliffs along Cape Cod Bay, made up of deposits from the last glaciation

Around 21,000 years ago, the ice began to melt, retreating from Long Island between 21,000 and 19,500 years ago.[1]:21 Dating of postglacial materials on Martha's Vineyard indicates that ice melted from it earlier than 15,300 years ago. The Cape Cod Bay lobe was parked outside what is now Boston for over a thousand years, beginning 16,000 years ago and receding into southwest Maine by 14,500 years ago.

The melting ice released vast amounts of water, creating glacial lakes dotted across the state. The largest, Lake Hitchcock, stretched from Connecticut to Vermont and New Hampshire. As the weight of the ice diminished, the earth's crust rebounded at a rate of 4.74 feet per mile, undercutting many of the glacial deposits,[clarification needed] especially in the Connecticut River Valley.[1]:22

Moraine deposits can be seen on Cape Cod. Originally hills when the ice retreated, they have eroded and shifted over time to help produce the characteristic arm of the Cape.[1]:23