The district is located in central and south-central Georgia, and stretches from the geographical center of the state to the Florida border. The district includes the cities of Warner Robins, Tifton, Thomasville, Moultrie, and portions of Macon and Valdosta.[5][6]

As of May 2015[update], there are seven former members of the U.S. House of Representatives from Georgia's 8th congressional district who are currently living at this time. 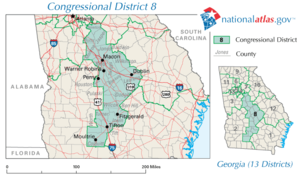 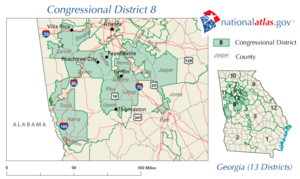